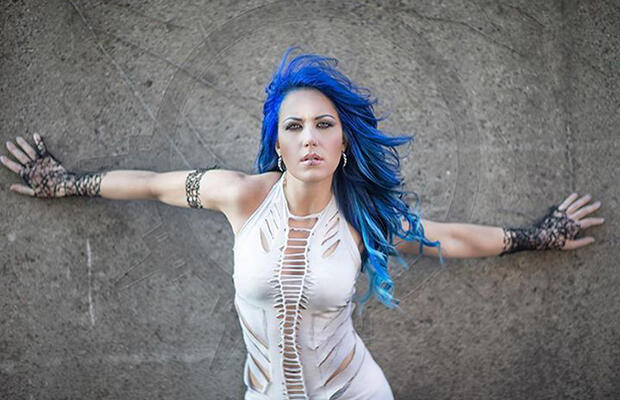 Manos SpanosJune 7, 2014
Metal Blast recently conducted an interview with new ARCH ENEMY singer Alissa White-Gluz. A couple of excerpts from the chat follow below. Metal Blast: When you were first offered the position as Angela's [Gossow] replacement, how much of a challenge did you feel you were going to face filling her shoes? Alissa: Angela is very iconic and broke down a lot of barriers not just for women in music, but in music in general. It's not a simple task to step in after her, but I feel confident in the album we wrote, and I know I have her support in this, since we're all a team working towards a common goal. I'm just going to do my absolute best, and hope everyone enjoys it as much as we do. Metal Blast: Angela is still involved with ARCH ENEMY, working in management. How much influence did she have on you being picked for the band, and what sort of influence does she still have in you and in your performance for ARCH ENEMY? Alissa: It was actually Angela's idea for me to be her successor, so to speak, so she definitely had a big role in that choice. For now she doesn't really have any influence in terms of the performance of the music, but she works very hard as the manager, so I speak to her every day about the business side of things. Metal Blast: Did she give you any advice that you felt was important in terms of your performance in ARCH ENEMY? Alissa: Yeah, I guess so; everyone in the band has kind of offered advice, because they all know what it's about. She hasn't really given anything specific, but she's always been good at giving me advice. For years and years she's been sort of a mentor to me, so if she offers it, I always listen. I mean, who better to learn from, right? Metal Blast: It's interesting because metalheads are quite an interesting breed, so to speak. Once fans develop some sort of sense of possession in regards to your band, they get very protective of the sound or what they want the band to be. For instance, when you think of Blaze Bayley replacing Bruce Dickinson in IRON MAIDEN, or Anette Olzon replacing Tarja Turunen in NIGHTWISH, there was a backlash where people said "That's not what we want." Was there some fear of facing the ARCH ENEMY's fans who associate the band mostly with Angela? Alissa: Yeah, but we've been pretty fortunate in this case. I've seen a couple of singer switches happen right before my eyes, one being Roy Khan to Tommy Karevik in KAMELOT, and the other was Anette Olzon to Floor Jansen in NIGHTWISH. Those happened with me present, and I saw how well the fans took to these singers because they were presented in the proper way. That's why we wanted to be careful with how we presented these news, and make sure that people knew that this is what the band wants. This is what Angela wants, this is what Michael [Amott, ARCH ENEMY guitarist] wants, this is what everybody in the band wants. We wanted to have new music right away, so fans wouldn't have to wait and wonder what it was going to sound like; we showed them [the title track of the new ARCH ENEMY album] "War Eternal" right away, so that they could put their fears to rest. I obviously understand what it's like. Even when Angela told me she was stepping down, I was, like, "Hey, wait, but I wanted you to keep singing!" [laughs] But people change, priorities shift, and this is what Angela wanted, so in the end it all worked out well for us, and we're very happy with the music. We just hope that the fans will also understand that we're still the same band, we're still making the same music, and that it's just a new era for us. So far, they have been very receptive to the music. Read the entire interview at Metal Blast.
05 min read 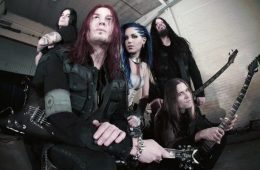 Manos SpanosMay 25, 2014
Swedish / American / Canadian metallers ARCH ENEMY played their first show with new singer Alissa White-Gluz, former vocalist of THE AGONIST, last night (Friday, May 23) at Turbohalle in Bucharest, Romania. Angela Gossow, who joined ARCH ENEMY in 2000 and made her debut on the now-classic "Wages Of Sin" (2001), has stepped down as frontwoman and will focus on management, while Alissa takes her place. Fan-filmed video footage of the Bucharest concert can be seen below. Check out photos of the concert at Metalhead.ro. ARCH ENEMY, new album, "War Eternal" will be released in North America on June 10 via Century Media Records. The cover artwork was created by Costin Chioreanu. The "War Eternal" video was directed by Patric Ullaeus of Revolver Film Company, who has previously worked with DIMMU BORGIR, LACUNA COIL, IN FLAMES, SONIC SYNDICATE and KAMELOT, among others. In a recent interview with Turk Gitar, ARCH ENEMY guitarist Michael Amott stated about Angela's exit from ARCH ENEMY: "It was a sudden change for the fans; we know that. But, of course, these kind of big steps in life don't come easily, and I believe this was a gradual thing that kept growing in Angela's mind for some time. "We had decided to take 2013 off from the road and any sort of band activity. The only thing we were doing was writing music and also there always the plan to go into the studio and record at the end of 2013. As the scheduled recording time got closer, Angela informed us last year that she would definitely be stepping down from her position in the band. "To be honest, it was not such a huge surprise to the rest of us, as there were a lot of conversations of that nature leading up to that point. I made the changes in the band that were necessary for ARCH ENEMY to continue and keep the music alive." Regarding Alissa's more versatile vocal approach compared to that of Gossow, Amott said: "Alissa has many different vocal styles that she can do very well… She is much more versatile in that aspect than Angela. But for ARCH ENEMY, we are sticking with the aggressive vocal style that we are known for. "When I started the band in 1995, I had the idea to make the most heavy melodic band of all time, combining elements of extreme death metal heaviness and thrash speed alongside traditional heavy metal and hard rock influences with the harmonies, melodies and solos. We are very much staying true to these roots of the band on 'War Eternal'." Speaking to Metal Underground, Alissa had the following to say about "War Eternal": "The circumstances surrounding the creation of this album, writing the lyrics and recording it, I'm just happy to have it finally come out. I think people are going to like it. The production quality is amazing! I always wanted an album that would sound this full. I'm a really big fan of this album, myself. Even if I weren't in the band and ARCH ENEMY put out this album, I would pick it up and say it's great. I'm really excited." On the topic of the new album title, Alissa said: "This album ended up being a lot more personal than maybe some of my previous or Michael's previous lyrics. In the past, a topic like war or a political or global issue was what we normally wrote about. We were writing in two different bands, but we happen to have similar topics in our writing. Then when we were writing for this album, we had a collection of lyrics for this album, but we found that we were actually writing on similar things. Fighting the ongoing war in your day-to-day life, everybody has their battle going on that nobody else knows about. And then there are song titles like 'Never Forgive, Never Forget' and on and on, I think it ties in very nicely. It wasn't something we planned out, but that is the way it turned out, so it worked out really nicely. I think we really saw eye to eye and were experiencing similar things in our lives, so we ended up writing about the same topics even though we have different styles of writing lyrics."
05 min read