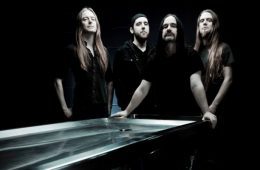 CARCASS’ BILL STEER: It Was ‘Shocking’ To Us How Positive Reaction Was To ‘Surgical Steel’

Manos SpanosMarch 5, 2014
Pat Furey of Behind The Mask recently conducted an interview with guitarist Bill Steer of reactivated British extreme metal pioneers CARCASS. A couple of excerpts from the chat follow below. Behind The Mask: You guys have a new album that dropped late last year on Nuclear Blast, entitled "Surgical Steel". I was surprised personally by the overall positive reaction that was unanimous from people. Did it surprise you given the rampant negativity that seem to infest the metal world? Bill: [Laughs] Yeah you're right, there's a lot of that going on. I wouldn't say it was quite unanimous, because, obviously, a lot of negative comments are out there, if you look for them, but yeah, it was really shocking to us just how positive the overall reaction was, and I just really wasn't ready for that. I was bracing myself for about a 50/50 reaction, and in the end it was more like 90/10 or something. It was great! Behind The Mask: You spoke about this being something that's been rewarding. Was there maybe any apprehension or trepidation when it came to making a new album? Were you at all fearful that people would just pass it off as not being relevant and be forgotten? Bill: Nah, we couldn't really allow our minds to go in that direction; otherwise we would have been frozen with fear. [laughs] I guess the way we started it was, looking back, because we hadn't told anybody we were writing material. Initially it was just Dan Wilding, our drummer, and myself in a rehearsal place, and then very shortly Jeff [Walker, bass/vocals] came down and joined us, and it was a very dynamic vibe between the three of us. Every day we achieved something. Either way we came away with either an entire song or a good chunk of a song finished. And we believed in what we were doing, so other people's expectations or opinions didn't enter into it until the things was done, in all honesty, and once we had it mastered and ready to go, that was a scary time, because you just brace yourself for a load of flack, really. Behind The Mask: With all of the reunion talk with currently defunct bands, has their ever been any talks amongst you and the guys from any incarnation in the various forms of the NAPALM DEATH lineup, talking about doing a big revival show with the revolving door of people who have been in that band? Bill: If there has been talk, I haven't heard any. I can't see how that would be possible really, as everyone is in different places. And I don't mean geographically, but mentally and musically. If you look at the current NAPALM lineup, I only actually played with one of those people. I have been at festival where both bands were playing and people would say, "You should get up and play with them," but that would feel incredibly forced, because we didn't actually ever share a stage together in the old days. The only person I can say that about would be Shane [Embury, bass], obviously. It's a tricky one, that band, because there are so many branches of the family tree, but what I would say is that for the era of that band that I was involved in, the pivotal member — and I don't think anyone could dispute this — was Mick Harris [drums]. Really, I think in terms of getting that version of NAPALM back together, he would have to be involved, and from what I understand, that isn't really that likely. Behind The Mask: Yeah, I've heard that he wants nothing to do with it ever again. Bill: It might be that, or it might be more complicated, because, you know, if a guy has been away from playing blast beats and very intense drumming for a number of years, it's really hard to get back into it. So even if he had the inclination, goodness, that's going to be a real uphill struggle to get back to that point. I'm sure the present lineup of NAPALM isn't particularly bothered about doing something like that anyway. Read the entire in
04 min read