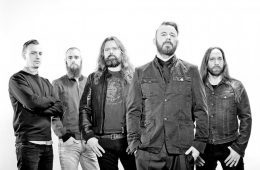 IN FLAMES’ BJÖRN GELOTTE: ‘We Divide Our Audience Every Record We Do’ 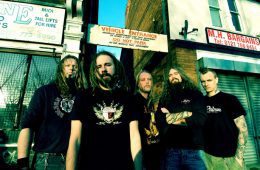 Manos SpanosMarch 28, 2014
"2112 - A Tale Of Meat And Metal", a new book by Peter Iwers and Björn Gelotte of the Swedish metal band IN FLAMES, along with journalist Mattias Lindeblad, will be released on May 30 via Kalla Kulor Förlag. Restaurant 2112 was founded in 2011 by Iwers and Gelotte. The Gothenburg restaurant is named after the RUSH album and has since its opening become a natural venue for domestic and international fans of rock music. 2112 quickly became renowned for its marvelous, award-winning burgers, the well-selected beer and the warm and inviting atmosphere. In just a few years, Restaurant 2112 has grown to become a home away from home for the rock-loving residents of Gothenburg and international rock stars passing through town. This book is the story about following your dreams, even though you've never ever set foot on the other side of the bar counter — a tale of meat and metal. The foreword was written by Hollywood star and IN FLAMES fan Peter Stormare. Said SLAYER's Kerry King: "It's nice to see a couple of my friends in the biz doing well at something else. Now we have a great place for some drinks!!" In an interview with EspyRock.com, Iwers stated about the decision to open Restaurant 2112: "We spent plenty of time thinking about it, looking at possible locations and learning the business side of things. Once we were prepared and knew we could open it, me, Bjorn and two other guys just went for it. We took it step by step, and although it was a lot harder than we ever expected it to be, we didn't rush anything. We've got people there who run it for us, and as soon as we're home, then we go straight to the restaurant and we help out. We do anything that needs to be done and on most occasions we're out as the host for all of the parties that come in. There are two parts to it, [the restaurant and also the pub section]. It's not one of these places that you need to wear a suit and tie, and it's also not a rock 'n' roll place either; [it's] something for everyone to enjoy." Asked what made him and Björn decide on fine dining, Peter said: "A couple of different reasons, actually. When we're out on tour and someone invites you to a place, it always ends up being a rock 'n' roll bar with loud music and clouded in smoke. After a show, I don't want that, I want a hotel bar which is quiet and I can just sit and relax; you know, the piano-and-champagne-type bar [laughs]. I just want to unwind after a show. Another reason is that I enjoy going out with my friends, having something to eat, a few drinks and talk away for the rest of the night, but most places in Sweden close at eleven, so you have to move on to somewhere else. You keep moving round places, but unless you're quick, then they are full and you end up at the loud rock bar anyway. So we decided that we would combine the two and give you a place that you can sit for a long time and dine, enjoy incredible food and drink at affordable prices, and then just move onto the pub area to continue a nice relaxing evening. "In the beginning, we had two different menus, but we then just made it the same menu so depending on how you feel and where you are, you will still be able to get the same good food and drinks." "If you were to be there on a Saturday night, then you would notice that it is interesting, because we have a mix of people in IRON MAIDEN t-shirts and then guys in their fifties with their suits and ties on, but everyone mixes perfectly, they all enjoy it and it is very calm, the perfect atmosphere and exactly what we wanted." Regarding the restaurant's name, 2112, Iwers said: "I think it was one of the other guys who came up with it; his name is Martin. It is a really clean name and we all happen to love RUSH. "We spent a while talking about what we would call it, because the name is extremely important; people get a feeling of what your restaurant or bar will be like from the name, and if we called it In Flames Bar, then people would think instantly that it was a metal place or somewhere dark and dungeon-like, maybe a bit twisted with people on flames or something stupid. The name though was clean and then the decoration brings out the rock 'n' roll vibe, which is helped with some paintings and we plan to add some guitars and things. So when he said, 'What about '2112', from RUSH?' we thought about some other restaurants that have all numbers or letter/number combinations and it just worked very well. If you know about RUSH, then it's awesome, but if you don't know about RUSH, then it still comes across as a neat name." 2112 is located at Magasingatan 5 in Gothenburg. For more information, go to this location. 2112talemeatmetalbook_638
05 min read