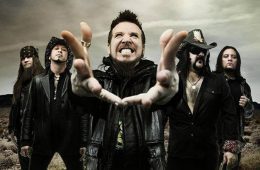 Manos SpanosMarch 5, 2014
HELLYEAH's fourth studio album, "Blood For Blood", will be released on June 10 via Eleven Seven Music. The CD was helmed by producer Kevin Churko at his The Hideout Recording Studio in Las Vegas, Nevada. Churko is the Canadian musician, sound engineer, songwriter and record producer who has previously worked with OZZY OSBOURNE, FIVE FINGER DEATH PUNCH and IN THIS MOMENT, among other acts. "Blood For Blood" is the album that HELLYEAH — featuring MUDVAYNE's Chad Gray on vocals, PANTERA's Vinnie Paul Abbott on drums and NOTHINGFACE's Tom Maxwell on guitar — has always wanted to make. "It's a defining record for HELLYEAH and for anyone on the fence," Paul declared, describing the record as "focused and with a clear direction." After roughly eight years, three albums, countless tours as headliners and as participants on "can't-miss" festival bills and hundreds of thousands of albums sold, HELLYEAH is making their biggest and boldest statement yet with "Blood For Blood". They are going for the jugular and every song on the album clamps down and doesn't let go. They've exchanged some of the party-centric, good time sounds of past efforts for pure metallic fury and emotional introspection. The album sounds like a recharged HELLYEAH, taken up many notches. "Blood For Blood" is easily HELLYEAH's most metallic album. It leaves a mark, thanks to songs like the angular, vengeful "DMF". There's also "Demons In The Dirt", a beast of a song birthed by the sort of anger that can't be faked; it will leave you wondering who pissed these guys off. "Gift" is dirty, rowdy rock with equal parts groove and swagger, but also possessed of the sort of punk rock energy that would make MOTÖRHEAD fans turn their heads. Then there is moodier, more contemplative fare like "Moth To The Flame" or "Hush", which connect on an emotional, cellular level, proving that you can be incredibly heavy in ways other than loud and fast. "We still have a love affair with this band and have a lot we want to say," explained Maxwell. He relished taking on a larger songwriting role and serving as the lead guitarist, which you can hear in the album's overall sound and in every note of his playing. "That magic is there for us, still. This is the record I've always wanted to make in this band, which has so many creative forces." Gray also shared that changes made the members closer. "We leaned on each other for support and inspiration," he said. The band opted to work with an outside producer for the first time ever, recruiting Churko for the job. "To move forward, you have to make changes," said Paul, who wrote the music in Texas with Maxwell before heading to Hideout Recording Studio in Sin City to put it to tape. "I am used to being a producer or co-producer and I wanted to see what would happen if I backed up and let someone take the reigns, leaving me to just be a drummer," said Paul, while admitting that vocals were the one area of production to which he couldn't do proper justice. The band was happy to allow Churko to provide a fresh perspective. Given Churko's resume, which is littered with names as diverse as OZZY OSBOURNE, IN THIS MOMENT and FIVE FINGER DEATH PUNCH, the band knew he was the man who could pull the best performance possible out of Gray. The singer himself praised that Churko had a unique way of extracting what he wanted, saying, "You can be a drill sergeant and rule through intimidation or be laid back and cool, but get it done without pressure. He rules through cool." Overall, the album has less of an obvious southern influence, with Paul deeming it "a metal record that also has melody.It lends itself to a diverse group of people." As the mouthpiece for the band, Gray lets out his primal scream throughout the album, enabling him to properly and fully express his emotions in the music. "We want to shut people up a little, the people who have never given HELLYEAH the time of day, for whatever reason," the singer said. "Whether you want it or not, it's undeniable. This [album] is an every night fistfight." Gray shared that he firmly believes in music as therapy and revels in helping the band's fans achieve catharsis with the music they have created. He acknowledged the fact that the album is devoid of the party anthems that previously populated the HELLYEAH catalog. "There is not a party song on this record, which we are kind of known for," he said. Gray continued "As much as I love those songs, they put us in a certain box that I've never been comfortable in since I'm not always like that." Instead, Gray and his bandmates wanted to show a depth, breadth and range of emotions and styles. It was important for Gray to craft songs that were heavy on multiple levels at the same time. His approach was that heavy doesn't always mean as fast and as loud as possible. He said, "For me, personally, I was going through my emotional checklist, and how I wanted to be heavy both aggressively and emotionally. I need that balance." For example, the mercurial "Moth" examines our base, animal instincts and drives. Despite knowing something is bad for you and will burn you, you still can’t pull yourself away from it. "Black December" turns a critical eye on the year-end holiday season, and more deeply, the sadness that can permeate the end of the year. "It's a deadly month and depressing," Gray explained. "It's a hard month to get through with
08 min read

Manos SpanosFebruary 13, 2014
HELLYEAH has parted ways with guitarist Greg Tribbett (MUDVAYNE) and bassist Bob "Zilla" Kakaha (DAMAGEPLAN). A replacement bassist in the shape of Kyle Sanders (BLOODSIMPLE) has been secured. HELLYEAH's fourth studio album, "Blood For Blood", will be released on June 10 via Eleven Seven Music. The CD was helmed by producer Kevin Churko at his The Hideout Recording Studio in Las Vegas, Nevada. Churko is the Canadian musician, sound engineer, songwriter and record producer who has previously worked with OZZY OSBOURNE, FIVE FINGER DEATH PUNCH and IN THIS MOMENT, among other acts. According to a press release, "Blood For Blood" is "a welcome return to form. It leaves a mark, thanks to songs like the angular, vengeful 'DMF', a song birthed by the sort of anger that can't be faked; it will leave you wondering who pissed these guys off. 'Gift' is dirty, rowdy rock with equal parts groove and swagger, but also possessed of the sort of punk rock energy that would make MOTÖRHEAD fans turns their heads. Then there is moodier, more contemplative fare like 'Moth' or 'Hush', which connect on an emotional, cellular level, proving that you can be incredibly heavy in ways other than loud and fast. The album sounds like a recharged HELLYEAH, taken up many notches." "Blood For Blood" track listing: 01. Sangre Por Sangre (Blood For Blood) 02. Demons In The Dirt 03. Soul Killer 04. Moth 05. Cross To Bier (Cradle Of Bones) 06. DMF 07. Gift 08. Hush 09. Say When 10. Black December The first single off "Blood For Blood", "Sangre Per Sangre (Blood For Blood)" will hit rock radio in April and will be available for sale, along with the metal radio track "Cross To Bier (Cradle of Bones)" on March 25 on all digital music platforms. The band will hit the road in the USA this spring. In a recent interview, drummer Vinnie Paul Abbott (formerly of PANTERA and DAMAGEPLAN) stated about HELLYEAH's plans for the next CD: "Everything [Kevin has] ever done is great. I feel like he really made Ozzy sound fresh again, [on 2007's] 'Black Rain' especially. Sonically, [Kevin's] records are unbeatable, and he gets the best out of every band. "We produced our last three albums ourselves, and we really feel like we did a good job on all that. But we feel it's time to have an outside ear, somebody to give us an extra opinion; to be the sixth member of the band, so to speak. That extra dude that drags everything out of you." Vinnie also revealed that the new record's overall sound would "continue in the direction" of 2012's "Band Of Brothers", which represented the first time that the members of the band fully embraced their musical roots. "The first two records were pretty experimental for us," Vinnie explained. "We really stepped outside of the box and did a lot of things that we couldn't do in PANTERA or MUDVAYNE or NOTHINGFACE; songs like 'Alcohaulin' Ass' just wouldn't fly in those bands. It was really liberating to be able to do that, and touch on some rock and roll, some blues, almost country southern rock, stuff like that. But with 'Band Of Brothers', we really wanted to get back to our roots and felt like it was time for all of us to bring the different things we brought to our previous bands into HELLYEAH, and not be afraid of it." HELLYEAH's first three albums were laid down in Dallas, Texas at Vinnie Paul Abbott's home studio, VP's Upstairs Studio. HELLYEAH took part in last year's edition of Gigantour, the critically acclaimed package festival founded in 2005 by MEGADETH mainman Dave Mustaine. Also appearing on the bill were headliners MEGADETH, along with BLACK LABEL SOCIETY, DEVICE, NEWSTED and DEATH DIVISION. "Band Of Brothers" sold 19,000 copies in the United States in its first week of release to debut at position No. 19 on The Billboar
04 min read