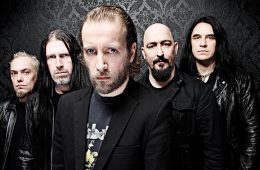 Manos SpanosOctober 14, 2013
From the harrowing doom of their 1990 debut, "Lost Paradise", to 1991's genre-defining"Gothic", to 1995's break-out masterpiece "Draconian Times", to 1997's electronically tinged"One Second", to 2007's return to a heavier form "In Requiem", to last year's opus "Tragic Idol", British gothic metal pioneers PARADISE LOST have continued to evolve since their inception in 1988, inspiring countless artists throughout the years. To celebrate their influence on the scene, a special compilation will be released this fall to commemorate the band's 25th-anniversary landmark. Entitled "Tragic Illusion 25 (The Rarities)" , this album will be released on October 21 in Europe (digitally on October 29 in North America) and features artwork by Parisian designerValnoir, who has worked with artists such as ORPHANED LAND, MORBID ANGEL, WATAIN, and more than 150 others. All tracks found on the compilation are previously released rarities — except the new track "Loneliness Remains", and newly recorded "Gothic 2013" and "Our Saviour 2013". "Tragic Illusion 25 (The Rarities)" track listing: 01. Loneliness Remains 02. Never Take Me Alive (SPEAR OF DESTINY cover version) 03. Ending Through Changes 04. The Last Fallen Saviour 05. Last Regret (Lost in Prague Orchestra Mix) 06. Faith Divides Us - Death Unites Us (Lost in Prague Orchestra Mix) 07. Cardinal Zero 08. Back On Disaster 09. Sons Of Perdition 10. Godless 11. Missing (EVERYTHING BUT THE GIRL cover version) 12. Silent In Heart 13. Gothic 2013 14. Our Saviour 2013 The song "Our Saviour 2013" can now be streamed in the YouTube clip below. PARADISE LOST's Aaron Aedy (guitar) comments: “The years surrounding our formation in the 20th century would have earmarked this as a B-sides collection. These were the songs that were left over from an album recording session you couldn't fit on to the sound quality restrictive, optimal length of both sides of a vinyl LP. You then usually used these for the flip side of your single as a nice extra for fans and also perhaps, as an incentive for the collectors to purchase to help any important charting or sales which could facilitate radio airplay, the best and most important way for your band to heard at that time. "Yes, my friends, it's hard to imagine now, there was a time before the Internet! A time when, even during the recording and writing of songs for our 'Lost Paradise' album, tape-trading demos and live tracks on the underground scene via mail (the real physical post kind!) were essential to a band's chance of being known by the people who would 'get it.' The magazinesMetal Hammer, Metal Forces and Kerrang! also had a couple of champions of the underground scene too, helping bands like ourselves be known on a wider scale, but rarer still indeed back then were the audio and visual outlets. In the U.K., we had the legendary 'Friday Rock Show With Tommy Vance', who introduced myself and many others to a lot of the bands they went on to love for life. Later, TV shows 'The Powerhour', 'Raw Power' and, of course, 'Headbangers Ball' on MTV. All, of course, pre-empted that Smörgåsbord of information, the Internet, for the discerning and hungry-for-more rock music fans to feast upon. "Twenty five years has seen a lot of change, not just musically for the band — take 'Our Saviour' and 'Faith Divides Us, Death Unites Us', for instance. The Internet has broadened the choice of music we can readily hear enormously, and more importantly, hear and see for ourselves to form our own opinion — not just what the larger commercial companies and stations want us to hear! "Added to our extra tracks from the past, we've included the recent re-recordings of 'Gothic'and 'Our Saviour'. This is something as a musician you find a strange experience. "We as a band have always been an album rather a single band, and re-recording old songs is most often best left alone — but when we rehearsed 'Our Saviour', a song long lost from our live sets for a good twenty years, we found it pretty exciting and fun! We decided before hitting the studio that we would not record it as a perfect 21st-century studio version, as I don't feel this song would benefit from it (in fact more so, lose its original charm), but we decided to just do it quick and almost demo speed. Whilst recording to capture the most raw element, we drafted in our old friend and producer Simon Efemey, who worked on our'Shades Of God', 'Icon' and 'Draconian Times' recordings to capture this, which whilst working to make it sound raw, made it fun too! Don't think of the re-recordings as replacements for our originals, but just as five blokes having fun and re-visiting the past in the studio.
06 min read 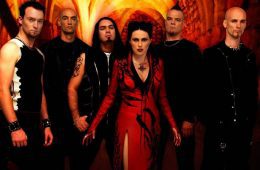 Manos SpanosSeptember 28, 2013
Dutch symphonic rockers WITHIN TEMPTATION have just released the "Paradise (What About Us?)" EP and promotional video, featuring a unique collaboration with classically trained Finnish rock diva, former NIGHTWISH singer Tarja Turunen, guesting on the title track. Comments WITHIN TEMPTATION frontwoman Sharon Den Adel: "When we had written the first version of 'Paradise' and listened back to the demo we'd recorded and the epic power of the song, we thought of Tarja instantly. How well this track would fit her classical voice and how extra special it would be if we sang it together. The more we thought about this wild idea, the more excited we got about it!" Following several video trailers teasing the track, fans have been speculating on the band's Facebook page who the duet would be with, some guessing it couldn't possibly be a "competing" artist like Tarja. However, the two singers had no hesitation joining forces, having never thought of themselves as competitors. Sharon continues: "Of course I didn't know what to expect from Tarja, as we'd never actually met in person 'till June this year. Our first encounter was via a Skype call we'd set-up to discuss the collaboration and we immediately clicked, not only creatively but personally. After we'd spoken, it felt completely natural that we would do this together!"
04 min read

Manos SpanosSeptember 25, 2013
MONSTER MAGNET will release its new album, "Last Patrol", in North America on October 15 via Napalm Records. The CD was produced by Dave Wyndorf and Phil Caivano, while "Evil" Joe Barresi (TOOL, QUEENS OF THE STONE AGE, BAD RELIGION) mixed the album, with additional production duties handled by Matt Hyde. The artwork was created by Johun Sumrow with consultation coming from Chris Ryall and designs by Ryan Clark for Invisible Creatures Inc. The album will be available as a limited edition CD, standard CD, 2LP and digital format. In support of "Last Patrol", MONSTER MAGNET will embark on a full-blown North American tour. Although the band has toured Europe relentlessly over the past decade, this is MONSTER MAGNET's first full North American tour in over 10 years. Support will come from Prosthetic artist ZODIAC. The tour is scheduled to kick off November 14 in Grand Rapids, Michigan and will run through December 14 in New York City.
03 min read

Manos SpanosJune 19, 2013
British gothic metal pioneers PARADISE LOST celebrated their 25th anniversary with a very special show at the Metal Hammer Golden Godsawards, which was held last night (Monday, June 17) at London's esteemed Indigo2 venue (headlined by the other British legends MOTÖRHEAD). PARADISE LOST invited their friends Cristina Scabbia (LACUNA COIL) — who sang "Say Just Words" in a duet with PARADISE LOST frontman Nick Holmes — and Gus G. (FIREWIND, OZZY OSBOURNE) who joined PARADISE LOST to pay tribute to the godfathers of metal, BLACK SABBATH, for an "Into The Void" cover version. Video footage of the "Say Just Words" performance featuring Cristina Scabbia can be seen below. In a statement released last week, Holmes stated about the Metal Hammer Golden Gods show: "[I am] really looking forward to singing with Cristina. I think it will be a lot of fun. She has an amazing voice, and I'm looking forward to being completely overshadowed!"
01 min read

Manos SpanosJune 13, 2013
British gothic metal pioneers PARADISE LOST will celebrate their 25th anniversary with a very special show at the Metal Hammer Golden Godsawards that will be held on June 17 at London's esteemed Indigo2 venue (headlined by the other British legends MOTÖRHEAD). PARADISE LOST invited their friends Cristina Scabbia (LACUNA COIL) — who will sing "Say Just Words" in a duet with PARADISE LOST frontmanNick Holmes — and Gus G. (FIREWIND, OZZY OSBOURNE) who will joinPARADISE LOST to pay tribute to the godfathers of metal, BLACK SABBATH, for an "Into The Void" cover version. Says Holmes: "[I am] really looking forward to singing with Cristina. I think it will be a lot of fun. She has an amazing voice, and I'm looking forward to being completely overshadowed!" Adds PARADISE LOST guitarist Greg Mackintosh: "It is the dream job of any guitarist to play for Ozzy, and Gus achieved that. I watched him atGraspop festival and he slayed the crowd. It will be awesome playing my favourite SABBATH song with Gus."
01 min read 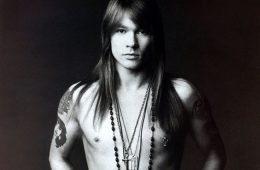 Manos SpanosMay 9, 2013
Source: Blabbermouth A white leather jacket in the same style as the one worn by GUNS N' ROSES lead singer Axl Rose in the band's video for the song "Par...
01 min read