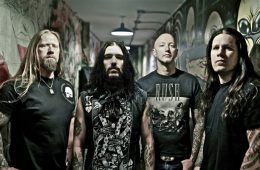 Manos SpanosNovember 2, 2013
Guitarist/vocalist Robb Flynn of San Francisco Bay Area metallers MACHINE HEAD has posted the following message on the band's Facebook page: "For those of you just tuning in today, in celebration of the 10-year anniversary of our fifth album, 'Through The Ashes Of Empires', I've written a multi-part story in my General Journals, today is Part 3 of the story. I've decided to do a Part 4 and 5 to 'Through The Ashes Turns 10', because I realize there is more of the story that needs to be told, so most likely on Tuesday and Thursday of next week, I'll throw them up. "Part 3 goes into the feud that happened between Kerry King [SLAYER] and I back in 2002. 'For the record: I'm not re-telling this to start and/or dig up old shit. I love Kerry, he fuckin' rules! We hung out two nights ago when SLAYER played in San Jose, we had a blast, got HAMMERED! But 10/11 years ago? Things were different, and in order to paint an accurate picture of where our heads were at for the writing of 'Through The Ashes Of Empires', this part of the story has to be told. It played a role. Consciously or unconsciously it definitely played a role. "In 2002, Kerry King of SLAYER and I got into a public war words over disrespectful comments he'd made about MACHINE HEAD. For over a year, I had bit my tongue in hopes that he would lay off, and just give it a rest, but he didn't, and after a particularly brutal stab at us and me in particular, I went for the jugular. I fucking roasted him. Things got ugly in a hurry in public and behind the scenes it was even worse. The feud would last for 5 years until 2007, when at theMetal Hammer Awards in London it was squashed. "I hated every minute of it. "To have someone who had shaped your musical life so much, who took MACHINE HEAD on their second and third tours ever, who was a former friend and mentor to me, just ripping on you… it was tough. But after a while, you have to say 'fuck this.' It doesn't matter who it is, you have to stick up for yourself. I couldn't let the things being said go unanswered. It might've gotten truly ugly, but I think we both earned each other's respect a little more in the long run. I respected him for calling us out publicly, when so many people in the music business just talk shit and plot behind people's backs, he gave his opinion and what can I say? It stung. However, once squashed, I like to think he respected me for standing my ground and protecting what was mine. Maybe it was tough love from Kerry King? Maybe, but one thing's for sure, in some ways it fueled a lot of anger in me. Maybe it worked. "In and around this same timeframe, Kerrang! magazine had shredded us in a slew of articles and show reviews. The U.K. magazine was famous for building bands up just to tear them down. At this stage in MACHINE HEAD's career, believe me, they were in full-on tear down mode. "I had mentioned in an earlier journal about the U.S. press and how they essentially had blacklisted us. Coverage in any magazine was just about nil, nada, zilch. To this day, we've only had one major cover story and that was back in '99 for the now-defunct Metal Maniacs. American journalists were asking me during interviews to 'apologize to our fans for'Supercharger'.' "Tours still did well and despite what the press has repeated over and over again, our fans stood by us. Sure, there was complaints from Head Cases [MACHINE HEAD fans], often times they said them respectfully to my face, or on the Internet, but they stood by MACHINE HEAD, and the ticket sales for those tours (thankfully) proved it. "But regardless of all that, we had hit a wall in the music business. Sure, we had just re-signed with Roadrunner in Europe but our future in the U.S. was terribly uncertain. Silently getting turned down by 35 U.S. labels... man... it was a lot of rejection. It weighed on me. I began to doubt myself. "Other bands were talking shit; ex-band members were talking shit (and still do). "We'd gotten a little merchandise advance, but we were living month to month and about to be broke again at any day. "It felt like the world wanted us to stop. "The vultures were circling.
010 min read