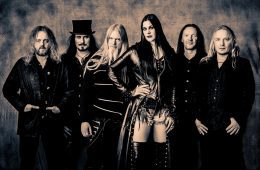 NIGHTWISH: Why We Are Openly Secular (Video)

Manos SpanosApril 20, 2015
In the three-minute clip below, Tuomas Holopainen and Troy Donockley of NIGHTWISH ...
01 min read 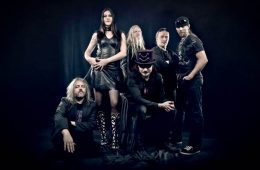 Manos SpanosOctober 10, 2013
Finnish symphonic metallers NIGHTWISH have announced the addition of Dutch singer Floor Jansen (REVAMP, ex-AFTER FOREVER) and English composer and multi-instrumentalist Troy Donockley (uilleann pipes, low whistles, vocals) to the group's permanent lineup. Says the band in a statement: "Originally we were going to wait until 2014 to make a decision about the future lineup of the band, but the past year has clearly shown us that Floor andTroy are perfect matching pieces to our puzzle, and we are really grateful of the bond that has grown between all of us. "We love you, guys." Adds Jansen: "Words cannot describe what I feel! This union is beyond everything, and I cannot tell you how wonderful it is to continue this amazing journey with my new brothers! "Once I had a dream… and this is it!!!" Says Donockley: "'Imaginaerum World Tour' was a revelation to me and in that time, I became aware of a growing unity and then, finally, a transcendence of all the usual nonsense that affects bands. A beautiful process. And since the idea, the musical dream that isNIGHTWISH has been a part of me since before I was born, I am delighted to officially sail into uncharted waters with my brothers and sister. Wondrous scenes Ahoy!" NIGHTWISH will release a new DVD, "Showtime, Storytime", on November 29 as a limited 2Blu-ray + 2CD digipack, limited 2DVD + 2CD digipack, limited 2CD digipack, 2LP (colored) in gatefold and an exclusive Nuclear Blast mailorder edition. "Showtime, Storytime" contains NIGHTWISH's entire August 3 performance at the Wacken Open Air festival in Wacken, Germany. The show, which was played in the front of 85,000 screaming metalheads, was directed by Ville Lipiäinen, filmed with seventeen cameras and has a total running time of 85 minutes. The second disc consists of a 120-minute tour documentary, "Please Learn The Setlist In 48 Hours", also directed by Ville Lipiäinen, with no shortage of drama or overall madness. Also, there is a 16-minute NIGHTWISH Table Hockey Tournament, filmed on tour. In addition, there are two music clips: "I Want My Tears Back"(live at Hartwall Arena in Helsinki, Finland) and "Ghost Love Score" (live in Buenos Aires). Check out a trailer for "Showtime, Storytime" below. The Wacken Open Air appearance was the first of the three final shows of NIGHTWISH's"Imaginaerum World Tour", which saw the band and their Jansen playing 104 concerts in 34 different countries, with a total audience of over 1.5 million fans around the globe. Commented NIGHTWISH mastermind and keyboardist Tuomas Holopainen: "Our darling flying Dutchwoman, Floor Jansen, has been nothing but incredible during her time in NIGHTWISH on this tour, so this is a perfect opportunity to immortalize the current vibe of the band on film!" Jansen made her live debut as the frontwoman of NIGHTWISH on October 1, 2012 at Showbox Sodo in Seattle, Washington following the abrupt departure of the band's lead singer of five years, Anette Olzon. Holopainen has known Jansen for more than 10 years already, having previously toured with her former band, AFTER FOREVER.
04 min read