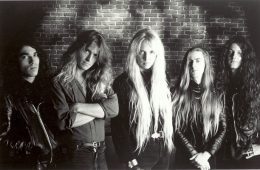 Manos SpanosJanuary 29, 2014
Reunited '80s cult metal outfit SANCTUARY will enter Jack Endino's Soundhouse Studios in Seattle on Superbowl Sunday (February 2) with producer Chris "Zeuss" Harris (SOULFLY, SHADOWS FALL, HATEBREED, MUNICIPAL WASTE) to begin recording its long-awaited band's "comeback" album, "The Year The Sun Died", due later in the year via Century Media Records. In 2010, four of the founding SANCTUARY members — Warrel Dane, Jim Sheppard, Lenny Rutledge and Dave Budbill — came together for a few select reunion performances. At first, it was just going to be a handful of shows, but the response and chemistry on stage was so overwhelming that the guys changed their minds. Now, some 20 years after they left off, SANCTUARY will continue with their unique mix of U.S. power metal, hard rock and progressive elements and begin work on a new LP. To complete the lineup, Brad Hull (FORCED ENTRY) will be filling in for former guitar player Sean Blosi. Commented Dane: "Having been with Century Media since 1995 with NEVERMORE, it was a very comfortable decision for SANCTUARY to sign with them. Century Media has a great team that always delivers for all of their bands. I've known most of them on a first name basis for many years and I look forward to this new chapter in history." Added Rutledge: "I can speak for every member of SANCTUARY when I say we are all excited to join the Century Media family. We now have the opportunity to work with the best metal record label on the planet. We are looking forward to creating great music with an awesome team behind us." SANCTUARY released the classic albums "Refuge Denied" and "Into The Mirror Black" during its short existence between 1985 and 1992. Following the band's split, Dane and Sheppard formed NEVERMORE. Asked about the progress of the songwriting sessions for SANCTUARY's new CD, Dane told GetYourRockOut in August 2012, "We've got so much stuff written that it's hard to sort through, but we played two new songs [at the Bloodstock Open Air festival]. We played the one ballad, it's called 'I Am Low', and we played another one called 'The World Is Wired'. Some of the other stuff is a little heavier, but those songs, I think, are… Sometimes the stuff that isn't as heavy is stronger, so that's why we picked those." He added, "I don't think anybody is gonna be disappointed, because I am involved in the creative process and I know what's going on and I know where we're going and I know it's gonna be killer." Regarding how SANCTUARY's reformation came about, Dane told Rock My Monkey TV, "[SANCTUARY guitarist Lenny Rutledge and I] always talked to each other, but never really been friends again. And when the whole thing came about, that we were actually friends again, that's when we started talking more about doing it. And it definitely wasn't because NEVERMORE was imploding... which it was, at that point . . . We all just started talking with each other again. That was kind of the groundwork for it. And then we started saying, 'Well, gosh, let's make music again.' And my god! Lenny is writing some stuff that is so friggin great! Obviously, he's been bottling this up for years, because he really hasn't been doing anything... Well, he's had bands here and there. But he's really writing some great stuff that's really inspiring me, and making me fall in love with music again, with the creative process... everything that revolves around that. Really inspiring me to write really evil lyrics." On the topic of the sound of SANCTUARY's upcoming studio album, Dane said, "This record is not going to sound like the other two. It might sound very similar to the second one ('Into The Mirror Black'). It's definitely not going to sound like the first one, because we're all a little bit older and I can't come up with a c-clamp for a scrotum and a helium tank . . . It's not going to sound like the old ones... it's 2011. It's still gonna be that good, I think, and there's gonna be high-pitched screaming. I'm making sure of that. With NEVERMORE, high-pitched screaming was never really called for. You know, with SANCTUARY... of course it is." SANCTUARY's current lineup: Warrel Dane - Vocals Lenny Rutledge - Guitar Brad Hull - Guitars Jim Sheppard - Bass Dave Budbill - Drums Photo credit: TKZ Photography "The World Is Wired" (new song) perfo
04 min read