No Refunds For Guns N’ Roses Fans In Dublin 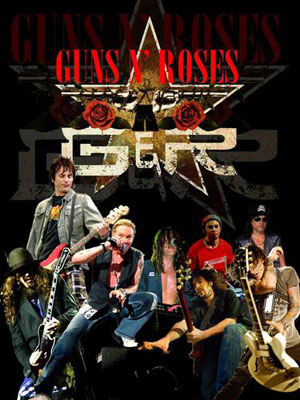 into its set — after keeping fans waiting for well over an hour for the group to begin playing — wil not receive a refund.

GUNS came on more than an hour after the opening act finished playing and leading members of the audience to boo and throw water bottles at the stage. More bottles arrived onstage after the group finally did start their show, leading singer Axl Rose to announce, “One more bottle and we’re going home, we’re here to have fun and we hope you are too, but one more and we are gone.”

Three songs later, another object was hurled onstage. Rose said goodnight, the group stopped the show and left the stage at 10:50 p.m. By 11:10 p.m., the house lights had come on and most of the crowd had left, despite staff members saying that they were trying to get the group to return.

The crowd were told they were experiencing “technical difficulties” before Denis Desmond from the Irish concert promotion company MCD came on stage and asked the crowd for patience.

After a short interval, the lights came on and thousands of fans left the arena.

The band appeared back on stage at 11:20 p.m. to complete their set. Rose said to the crowd: “Let’s try this again”. He did not say another word to the crowd other than to thank them at the end of the show.

According to IrishTimes.com, the band played until 12:52 a.m., by which stage more fans had left.

A spokesperson for MCD has since issued a statement saying, “Despite his [Axl Rose] continued appeals, having tried to continue performing for 22 minutes, people continued throwing unknown substances leaving the artist with no choice but to leave the stage.

“While the artist has a long history for being late on stage, no artist should be subjected to missiles and unknown substances being thrown at them.

“Once people stopped throwing items, GUNS N’ ROSES returned on stage and performed their full set list of songs, so the issue of refunds does not arise.”

This latest drama followed last month’s controversial GUNS N’ ROSES gigs at England’s Reading and Leeds festivals, where the band came onstage late despite warnings from the promoters, and had both sets cut short.

Rose posted a series of messages on Twitter claiming that the band was under the impression that their curfew was to be extended, although promoters had clearly said prior to the concerts that GUNS had to abide by local curfew regulations.