Underground: Black Soul Horde – Tales Of The Ancient Ones 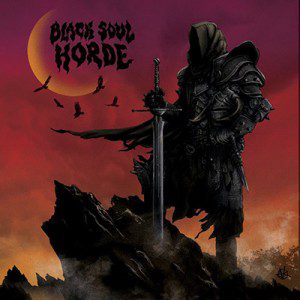 Black Soul Horde is one of the most interesting side projects in Greek metal scene. The project is created by Jim Kotsis (Mahakala) and John Tsiakopoulos. The bands aim is clear; shaking the ground with classic heavy metal music. By the moment the line-up was filled, the band recorded a debut record, titled ‘Tales of the Ancient Ones’, with a great artwork presenting a mystical warrior, holding his sword towards the ground, wearing black armor and looking extremely fearsome.

As I have written in the prologue, Black Soul Horde is all about old-school heavy metal, with epic guitar riffs, fast-paced and thirsty for blood. While listening to the record, we can easily spot influences from the NWOBHM scene and US heavy metal, however we find a much clearer modern sound, which is not a negative element at all. I was sick and tired of bands which wanted to sound old-school and actually forced themselves to record badly and have a poor sound, similar to the sound records had decades ago. It seems that Black Soul Horde made the right choices and left us impressed with the result.

Most of the songs are fast-paced and contain sharp guitar riffs. Jim’s voice switches between epic vocal melodies to doom and heavy vocals. There are plenty guitar solos too, and actually the guitars are always the main- instruments to lead the song and change its continuation. The structure of the songs is the classic one we tend to spot in heavy metal, which means we have guitar solos everywhere and less break-downs.  The lyrical themes are circling around epical themes, themes about battlefields and fantasy.

The record opens with ‘Let the Valkyrs Ride’, a song that actually reflects the classical NWOBHM influences of the band. Sharp, fast guitars and even sharper vocals. Every riff seems to fit greatly and this happens in every single song. ‘Reborn in Fire and Blood’ is the next one, with speedy guitar solo for an intro and epic riffs. It is totally a battle song, and the band continues with the ground-shaking music in the next songs. ‘Demonon Tagmata’, is built on rhythmical drumming and the numerous guitar solos, making it a significant one.

‘Ancestor of the Ancient Gods’, begins with a drum n bass intro, to progress into a mid-tempo song, with strong outbursts of epic guitar riffs. The band worked in every moment of this one, making hard to find something bad in the music lines.  ‘Coming Home (Song of Gaia), is the only song which slows the pace down. It is an acoustic one, more like a heavy metal ballad. The bass is groovy, behind those clean guitar riffs, and the solos are mind-blowing.

Those who are keen on classic heavy metal and epic metal subgenres will find this record a totally must-hear.  It doesn’t create something new for metal, but it is one of the most well- made and finest classic heavy metal records of newcomers I had the chance to hear, and believe me, most of those ‘newcomers’ tend just to play lame music, like ghosts of the past. Black Soul Horde on the other hand created something unique and strong. The mixture of old-school mood along with modern sound made it possible for them to become something clearly different from the large mass of the band which looks back into older genres of metal.