Job For A Cowboy (Bobby Thompson)

Second full-length album for Job For A Cowboy and Metalpaths talks with Bobby Thompson, the guitarist of the band, for the composing process of “Ruination”.

A new album with new members, why you have ended up to end your cooperation with the former members? Are you satisfied with the correspondence of your fans about it, so far?

Ravi, our previous guitar play, left the band to go to school to become a doctor. I think he’s studying to become a cardiologist. So far I’m definitely excited about the fans reaction to the new album. It’s feeling really good.

What was the composing process of the songs like in “Ruination” ?

The writing process was stressful as usual. We basically had a few months after a small headlining tour to complete the album and all this stuff was a little bit stressful you know. However, I’m really happy with how it turned out. It was awesome writing with this lineup.

The songs of “Ruination” testify that the band has a change in its sound and your music is more technical death. Do you think that this is the right genre for you to play or you are willing to experiment more with Job For A Cowboy ?

I think we’ll always be experimenting and growing as a band. I love our sound now but I most definitely want to evolve more with our next record. 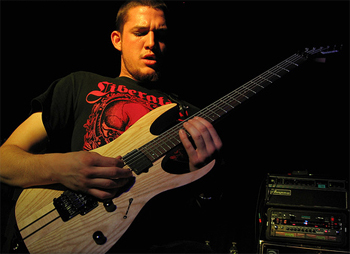 Something that in my opinion is an advantage of this album is the lyrics. Your lyrics have now a more political background, what led you to this? And what means ‘Ruination’ to you?

Jonny, our vocalist, comes up with all the lyrical ideas and concepts. I think he wanted to incorporate more political and current issues in his lyrics to kind of mix it up from the last record that was so focused on religious conspiracies.

Do you plan on shooting a video for this album?

We actually already did. We filmed a video in Philadelphia for the song “Unfurling A Darkened Gospel”. It’s online at youtube now so you can check it out there.

You have toured with great bands, I can now remember Slayer, Behemoth, Hate Eternal, Megadeth, Cannibal Corpse and others, how big and nice of an experience it is for you to hang out and play with some of the bands that we all grew up with?

It’s a honor being able to share the stage with all of these bands. It’s a very surreal experience to see Dave Mustaine for example hanging out backstage.

Would you put a label to the music of Job For A Cowboy or you prefer to evolve to your albums through the listenings and the experiences of the time they’ve written?

I don’t know if I would put a label to our music, I just know that I love playing and writing it. The people can decide what they want to call it.

In your new ‘child’ we can see that there are few influences from other metal genres. What are your listenings as a band?

My personal influences and what I listen to basically range from bands like Morbid Angel, Cannibal Corpse, Aeon and decapitated to bands like Muse and Mars Volta and even classic rock legends like Jimi Hendrix and Led Zeppelin. So as you can see there are a lot of different genres and bands that influence us as a band. 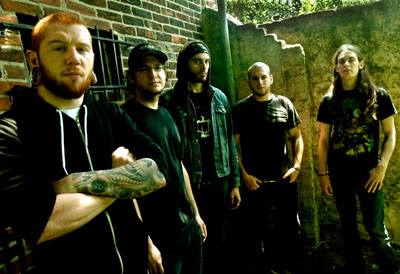 In a few days a new tour begins on North America, after that? A new tour maybe? Will we have the chance to see you live here in Greece? There are lots of people here who want to see you live and told me to make this question to you!

I would absolutely love to play in Greece! It’s one place I have always wanted to go to but I never had an opportunity to. We’re trying to get over to Europe early next year so hopefully we will be able to come to Greece!

I believe that you made a dynamic appearance some years ago, and the main way that you used for it was the internet. Do you believe that a new band’s priority should be the presentation of them on the internet? And please give us your opinion about myspace, youtube, etc. and if they can help metal or damage it.

A bands priority should be music first and foremost. No matter how technology progresses the music has to be the most important thing to a band. The internet helps get the band’s name and music out there but if your are only worried about getting famous or popular I guarantee the music is going to suffer. It should always be about the music.

Another mystery around your group is the name. Job For A Cowboy… no gore, no blood, no death in it, strange for a death metal band. Why you chose this name?

It was a joke sort of. Our singer came up with it as a joke when the band started and it kind of stuck.

What about your plans for the future?

We’re gonna continue to get our music to as many people in as many places as possible. There is a large part of the earth that we have not been to so we have got some serious work to do.

Thank you so much to everyone that has supported and helped the band in anyway! We couldn’t do it without you.