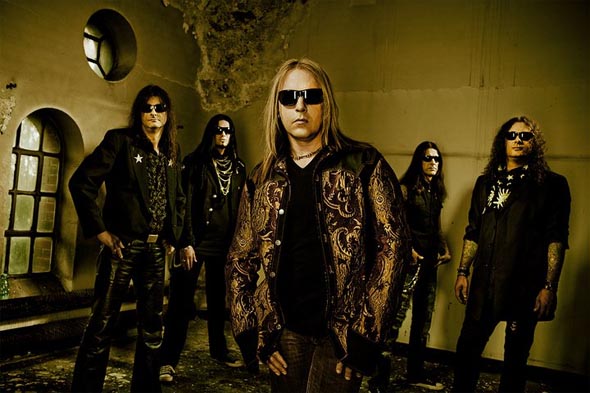 On the ocassion of the new Helloween album “7 Sinners”, Markus Grosskopf interviewed by Metalpaths. The bassist of the band who seems to be one one of the two remaining original members of the piorineering power metal band, explains what makes “7 Sinners” a fresh album and also talks about the tour with Stratovarius.

(in German) Hello Markus it’s Angel calling from Metalpaths in Greece. How are you?

I’m fine, it’s nice to hear you. Where did you learn German? Are we going to do this interview in German?

No I’m sorry we have to do it in English but I just wanted to greet you in your mother tongue.

It’s ok there is no problem. Let’s start. 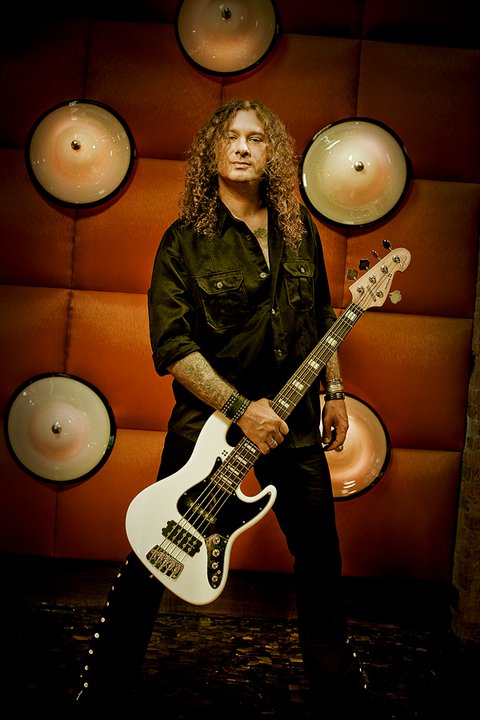 So the first question is about the previous release you did called “Unarmed” which was something very different for Helloween. We’d like to know your opinion about it and how it was as an experience.

Yes I can tell I liked it very much and I still like it. It was something very different for the band and it was done in order to celebrate 25 years since we formed. It was a little strange that we had to play in acoustic forms and make new arrangements to these songs which we have grown up with but the final result leaves me satisfied 100%. I enjoyed it very much. It is something that happens only once and it was the right time to do it. So that’s the story behind it.

That’s nice to hear but right now we must talk about returning to power forms. You have a new album called “7 Sinners” which I personally liked it very much and so did the people in Greece. It is a very powerful album, a very fresh album that sounds very heavy and for many people it is the best you have done the last decade. We’d like to know about the recording process, the production, how long it took you and if you are satisfied with the final result.

I’m very glad you liked it. It is what you say; an album that sounds fresh and it is because we were in a very good mood when we were recording it. Also this time we took advantage of the skills of our drummer Dani Loble that made the album sound like this. We discovered that he can play many things that we were not aware of so far, so he played some really fast and powerful tunes and he drove some of the songs to a higher level. Also I have to say that we’ve been working on this for about a year, from the point where the first song started to take place until the end when it was over. It took us about three or four months to record it, mix it and produce it and we are very satisfied with the final result.

Did you record it in Tenerife in the studio of Andi again with Charlie Bauerfeind as a producer?

Yes we did. Actually I wrote the bass parts in my home studio but pretty much the rest of the material was recorded in the studio of Andi. Charlie knew what to do, which things he had to change a little and we had a great time once again during the recordings.

Could we say that Charlie is the sixth Helloween member? He seems to know you very well and he makes you sound very powerful and fresh. Also very modern but staying to your traditional style.

In terms of production I could say definitely yes. He is a great producer that everybody would like to have and he is very responsible for the sound that comes in what you listen to the new album. 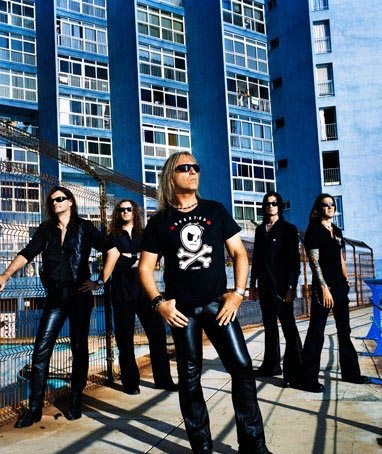 Apart from Charlie, I also believe that the two newest members which are Sascha and Dani on guitar and drums seem to have become more responsible and they gave their own touch to the album. That’s why the band sounds so tied and that’s why most of the people I know like the album very much. What’s your opinion about it?

It is true because this time we were more focused as a band to what we wanted to do and of course they helped us a lot. I told you before about Dani and his skills and the same happens also with Sascha. We are very lucky to have them with us.

The new album consists of a variety of songs. It has heavy mid tempo ones, pounding fast ones, some slower and even the exclusive track “I Am Free” on the single of “Are You Metal?” is so good that many people would like it to be on the album.

Yes we have a variety of songs this time and anyone can focus on what he likes the most. I believe that the album works very well both collectively and as a whole. Of course we tried to do our best and we didn’t want to give crappy stuff to the fans like using them as bonus tracks on singles. There is also the Asian market that always wants bonus tracks and that’s why we have to do some for them. You know how it works and that is what all bands do, so did we.

Which songs did you write on the album so that we can know better your personal style?

I wrote the bonus track of the single we talked about before; “I Am Free” and I also wrote “If A Mountain Could Talk” and “World Of Fantasy”.

I must tell you that this time one of the reasons I like the album very much is that Helloween sound serious and mature. I don’t know if you understand what I mean, but there is an air like on “The Dark Ride”, not so bitter like that album but more adapted to the likes of 2010. We all love the “happy-happy Helloween” stuff and the most joy parts of you but to be honest I also love that style of yours very much.

Thank you very much it is very nice to know that we can cause such opinions, we are all very happy and funny people but sometimes in music we must make some changes the right time for the right result to happen. So if you think that the album sounds better because of this, I can tell nothing and I’m very positive with it. It’s happy to know that. 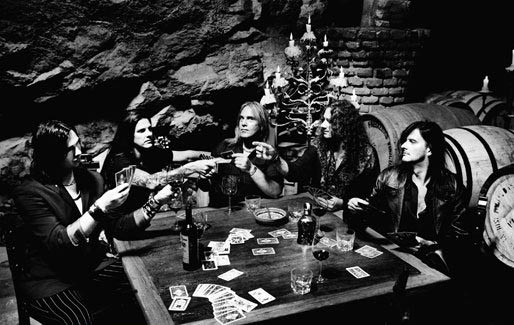 You did a video for the song “Are You Metal?” which is a very good one. We’d like some details about how long it took you and how did you find it? Are you going to make another one too?

Actually we had a great time doing it. It tooks us only a day and there is no pressure about it, we and the staff had pretty funny times drinking beers, eating pizzas, saying jokes to each other and generally it was done very fast and very professional. This is the only video we are going to have for the album and the next thing we are going to do is focused on touring. We are starting in Berlin as a presentation where we will play 50 minutes and then hang out with our fans.

To be honest I have to tell you that when you first came in Greece in 1998 the fans were a little disappointed but when you came here the last time with Gamma Ray and with the new album having a good response in Greece so far, the fans are very eager to see you once again. What was it that changed the climate in the band since then?

I think it was the decision that we had to do some things right and we had to give our fans the best we could. That period things were not getting very well inside the band and unfortunately someone could see that we were not who we wanted to be. But things have changed a lot since then and now we are on a very good period, our relations between us are great and that’s what we want our fans to see.

Last time it was Gamma Ray and now it is Stratovarius that are going to accompany you in this tour. Is it a statement that you want to make links with other great bands and also declare that power metal is still alive?

Yes, that’s the spirit pretty much we had this opportunity to do a tour with the guys in Stratovarius and it is great for the fans to see both bands live. They will have the time to do whatever they want, they will play one hour each day and then it will be our time to make the fans happy too. 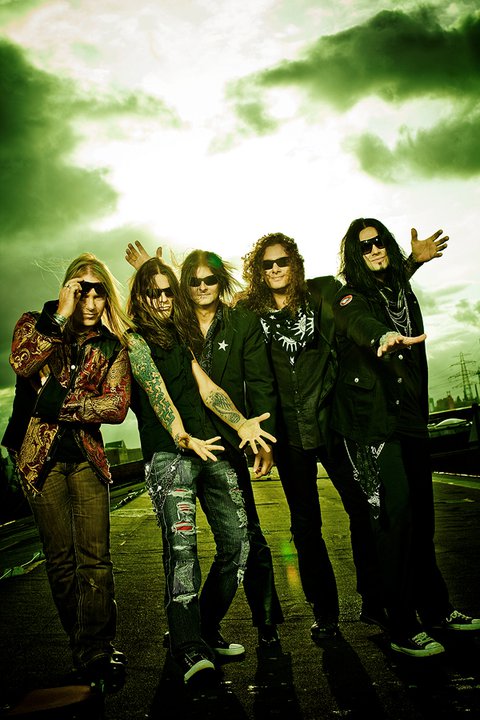 Andi seems to scream a little more on the album. Did that happen on purpose or it came naturally

We wanted to do what the songs wanted to this time. We wrote such material that we wanted to give them what they deserved so that’s why you listen to him screaming a little more this time. It happened naturally because that was the structure of the songs and it was something that finally gave us a lot of pleasure.

Which is the response you have so far for the album? Here in Greece like I told you before, most people liked it very much but what about the rest of the world?

So far nobody really complained about it at all. They seem to like it and it’s nice to see the reactions of the fans because nobody really expected an album like this from us and it’s good to see that they finally liked it.

Could we have some of your personal influences before you started the band because Helloween were the originators of power metal so it would be very interesting to know which once drove you to play music.

It was definitely AC/DC and UFO. I can remember falling off the chair when I heard the very first Iron Maiden album you know and then later on Led Zeppelin, The Who, Pete Townsend is one of my favorite bass players, then Thin Lizzy, I’m a big fan of them and of course Phil Lynott. All those bands are really really great. Then I started to listen to punk music with bands such as the Sex Pistols and to Ramones.

We’d like to know if there are any new bands that you like very much and which ones? Do you believe that they could do something good for heavy metal in general?

I like Soilwork very much. “Figure Number Five” is still one of my favorite albums in general.

So before we close this interview you can add whatever you want to the fans.

You can try though.

Yes I can (laughing).

We want to thank you very much for this interview. It was a pleasure and an honor talking to you and we wait for you to come in January.

Thank you too very much. I will see you there and all Greek fans of course and maybe we can raise a bottle, a glass of beer or whatever else. Have a great time.