First of all, congratulations about your new album. It took quite a while once again. Could you tell us what the band had been doing after the release of ”Paradise Lost” until now?

Thank you. After the release of Paradise Lost, we spent the next couple years touring for that CD, the last tour, in China, was about March of 2009. Then we started working on the new CD. It seems like a lot of time between releases because we wait until the touring cycle is finished before we start writing the the music for the next CD. We tried writing on the road, but there are a lot of distractions… we find it best when, after the touring is finished, we can give 100% of our time and effort to the new music.

The production is so amazing that it sounds like you are playing really next to our ears. We’d like to know some more about the recording process and if you’re satisfied with the final result.

We are very satisfied with the CD! We knew, we wanted the music to be a bit more relentless and aggressive, so with the recording, we kept this in mind. We do all the recording in my studio, so we also have the luxury of taking our time and experimenting with different sounds and techniques. A lot is also on the mixing end, where Jens Bogren really pulls it all together. He did a great job for us with ” Paradise Lost”, and really wanted him for the mix on “Iconoclast”. The last few CDs have been very guitar-riff driven, so a more “in your face” style mix works out great. 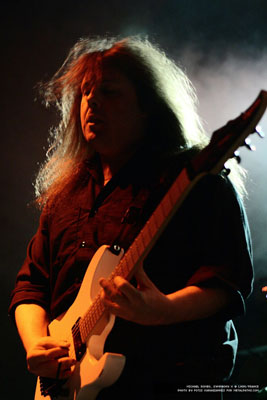 To us, the Limited Edition is the REAL version. All the songs were written for the “Iconoclast” release, it just turned out to be more material that would fit on one disc, so we did a double-disc. There were no bonus tracks or anything like that, I just write until it feels like the music has said all it needs to say and the CD feels complete. We didn’t realize there was so much material until the end, when we timed in, and decided we wanted all the songs and needed to do a double-disc. The is also a single disc version which, of course, has a few songs taken off to fit on the single CD.

I also dare to say that the second CD is even heavier and I like it a little more than the first one. What surprises people more every time is the fact that you get much heavier in each album. Can it really get any heavier?

I grew up with metal, so it is in my blood and always a part of the music. It mostly depends on the theme of the CD, or what we want to express with the music. With Iconoclast, it was definitely a heavier, more aggressive and relentless type of direction. The heavier stuff always feels great live, as well.

Russel Allen sounds as if he’s going to devour the listener, ready to come out of the speaker. In what form of torture did you put him through to make him sound like that?

Haha, yeah.. Russ just finds that perfect style to match the music, again, going with the direction of each CD. This time it was the Man vs. Machine idea and the aggressive and relentless nature of the music.

In the eyes of all metal fans, whether they like Symphony X or not, you are one of the most complete guitar players of all time. You play what the middle metalhead wants to hear, combining all kinds of expression. How do you decide if there has to be more aggression, melody, rhythm in specific parts of the songs and how much difficult is this?

Not much difficulty, actually. As the songs and riffs develop, things just naturally fall into place. I really try no to think about it too much, just play from the heart, and what feels right in each particular song. Of course the heavy and fast stuff is always a lot of fun, though!

In 1994 you released an excellent solo album called ”The Dark Chapter”. Fans are wondering if there will be another solo album in the future. 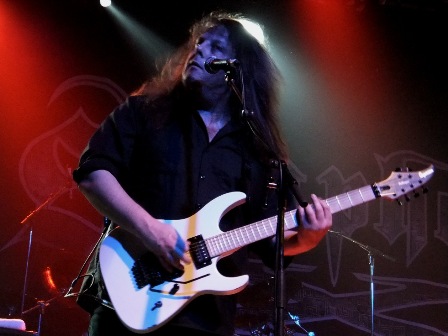 at that time (1994), decided it would be cool to release it. I would love to do another solo CD and have been putting ideas aside for a while to do it. Maybe in the next year.

It’s a common secret that all people are happythat the band gets more recognition as years pass by. Most of them believe that this should have come much earlier. Do you feel justice has been given for the band after all these years of hard work? Does it also bring more responsibility to the five of you?

Sure, if it was earlier it would have been nice, but we’ve been continually growing our success more each year and with each passing CD. It is good to see our hard work paying off! Like I said, we put everything we have into each new CD and give every live performance 100%.

It would be very interesting to know the way you got into music generally and guitar specifically. Are there any new bands that you like a lot and people should check out?

I started out playing piano when I was very young, I always felt close to music. I started playing guitar when I was about 14 and listening to bands Kiss, Zeppelin and AC/DC. Then I got more into metal, bands like Sabbath, Priest and Maiden… as well as progressive bands like Rush, ELP and Frank Zappa. The biggest guitar influence, in the beginning, was Randy Rhoads on the Ozzy stuff. That’s when I really got into the whole ‘guitar playing’ aspect and that introduced me to players like Uli Jon Roth, Al Di meola, Alan Holdsworth, Paul Gilbert, Yngwie Malmsteen and all the other great players.

You are visiting Greece for the first time. How much excited do you feel every time you go to a different country for the first time? Is it a motive for you to play even better? What should the fans expect from you?

It is definitely cool going to new places for the first time, and Greece will be a lot of fun. We really can’t wait and have heard so many great things about the Greek fans. We are really looking forward to the show! It’s gonna be a night for us to remember! See you all soon!