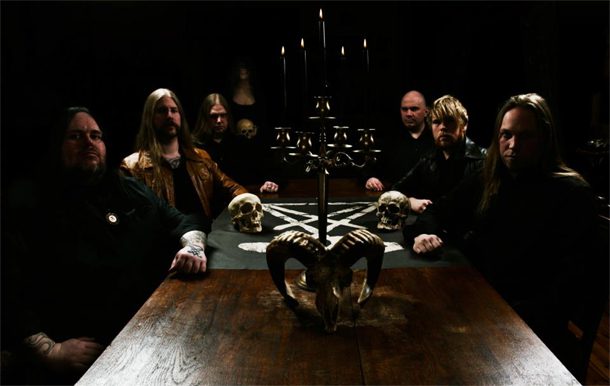 Coming from the rising scene of occult rock, the very promising Year of The Goat release their debut album “Angel’s Necropolis” which is the successor of the highly acclaimed mini CD “Lucem Ferre” in 2011. Thomas Sabbathi (guitar/vocals) and Per Broddesson (guitar) introduce themselves talking about how did the band start, their influences, their beliefs and their expectations…by Panagiotis Karagiannidis.

Starting this interview I would like a short introduction about the band. How did you start?

Per: To put it in short, Thomas already had the idea for this band somewhere around 2006 while he was still playing in other bands. As we got to know one another in our other band Griftegård, we realised that we had a lot in common musically and other common interests (read the occult). I had also expressed my will to join one of his other bands as a guitarist and before we got to rehearse some of that material he basically brought some new ideas meant for YOTG. With a friend of his playing the drums this is roughly how YOTG was born. In the beginning we had a few different guitar and bassplayers pass through the lineup before we found what could be considered Mk1 who recorded the Lucem Ferre. For AN the lineup has expanded and changed slightly – so as far as we can tell Mk2 is the definitive lineup! 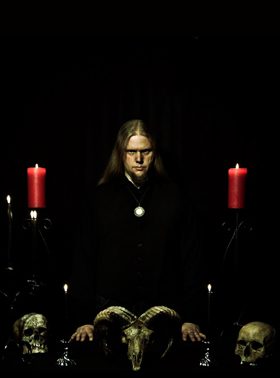 How would you describe YOTG music in just a sentence?

Per: Occultinspired progressive 70s rock with a sense of melody.

Your first studio release was the highly acclaimed mini-cd “Lucem Ferre” which was a very promising debut for a newborn band. Does it bring an unexpected pressure on the band maybe?

Per: Actually, no. A lot of the material found on AN was already born, if not 100% completed, by the time we released LF so we already knew where we were heading and feeling confident about our material we didn’t feel any pressure of completing AN. With that said, we were of course a bit nervous as to how the album would be received by fans and media because it took us so long to release it, and even if every band “only writes to satisfy themselves” I don’t believe anyone who says that they don’t give a shit as to how it’s received. Of course we DO write music for ourselves, but we also want our fans to appreciate it. We would however never compromise and change only to reach a larger audience.

So “Angels’ Necropolis” is your first full-length album. What were fans’ first reactions?

Per: As far as we can tell fans seem to enjoy the album a lot. In media we have, with the odd exception, only received great reviews and recommendations. So at least we are managing to stay away from the dangerous middleground where people just go “ok”.

Tell us a few things about the composing process. Who writes the music and how does it work when you’re about to write new songs?

Per: Up until now it’s usually Thomas who brings a more or less completed song to rehearsals and then we kind of filter it through the rest of us while learning the songs. Once we’re comfortable with the material we start adding or removing our own touches to the mix.

Lyrically, the songs are obviously praising Satan. Do the lyrics express your beliefs or it’s just about lyrics that fit with your music? 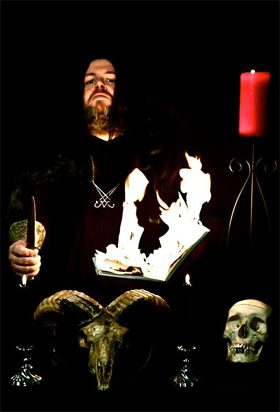 Thomas: This is a strong belief in my own opinion! i can only speak for my self in this matter. I was lost in this world but i found myself in the guiding light of Lucem Ferre and he pointing me in the right direction. When it comes to the lyrics it’s self experience and 100% visions under the ritual of my own. Under the ritual i get in touch with elements that show me the scene for my lyrics, i just observe the scene and becomes one of the Spirits Of Fire.

Can you name us a few bands that influenced you the most?

Per: I don’t think any specific band has influenced us to start YotG, but more of an accumulated background of listening and playing all different kinds of music where the focus mainly lies in the late 60s through the 70s. Between us we have a wide listening range but for me personally I always come back to BÖC, Lizzy, Schenker, Nwobhm and the likes. Every band or song that one likes and gets hooked on somehow influences you, or so I’d like to believe at least.

What’s your opinion about the occult rock/metal scene nowadays? It seems that more and more bands coming out inspired by the 60’s and 70’s sound and this scene is rising again becoming more popular day by day. What caused that rebirth in your opinion?

Per: I am not to usually follow what’s happening in today’s music scene. I am far too busy digging up old rarities and treasures from the past (laughs). In the case of the occult rock scene I am of course a bit aware of it co.nsidering I seem to be part of it. I think that it’s healthy that people around the world are starting to prick up their ears to quality music, the downside is that it has now become so big that we are seeing lesser quality bands and wagonjumpers appearing here and there so that labels can cash in (nope – I will not give any examples since this is my highly private opinion) which will, as always with trends and genres, lead to a decreased interest in this type of music and then people and media will turn their attention to the next thing. Only a few bands, as with any genre, will survive. As to what sparked this rebirth I couldn’t really tell.

How do you imagine the future of the band and what are your expectations?

Per: Given the right opportunities we will work as hard as we possibly can to make YOTG a household name. In the musicbusiness you never know what will happen since there are so many factors involved, but our hopes and expectations are to make it as far as humanly possible.

So, what are your future plans?

Per: We are in the process of booking as many gigs as possible to support AN and bring it out to a larger audience. Some already confirmed can be found on our facebookpage, and more that are under discussions. We are working on a better website (yearofthegoat.se) and are therefore not updating that one as much at the moment. More so, we are already one step ahead and are plotting our next fullength already and have quite a bit of material to work with. So, if I can stay away from breaking any more fingers and causing massive delays it shouldn’t be too far away for the next fullength. Being the timeoptimists we are we’d like to start recordings sometime later this year.

Thanks for the interview. The last words belong to you.

Thomas: Many thanks for the interview and we wish you all the luck with Metalpaths! AVE LUCEM FERRE !