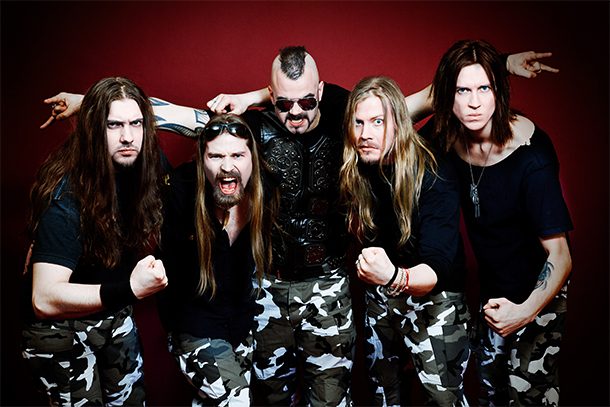 Just before Sabaton’s gig in Athens on March 22nd, Metalpaths had the chance to meet Joakim Brodén, the voice of the band. The talk revolved around “Carolus Rex”, of course, the Swedish Empire tour, the new members and other warfare stuff…by Stella Papaspyropoulou

Joakim welcome to Metalpaths! How have you been?

Thank you! Well, in general, very very good, thank you, but it’s been a bit chaotic here, a bit stressful since we got our trailers back at the Croatian borders, which meant we had to go back from Slovenia to Croatia and try to travel through Hungary and Bulgaria to get here. But there was a big big snowstorm in Hungary, which meant that we ended up missing one or two flights because we were with the tour bus, so we flew to Thessaloniki. We came three hours before the show, set everything up and play. It’s a shame, because we really wanted to bring the whole stage set and the full production, since we haven’t been here in Greece since 2009, but at least we managed to sort it out and we still haven’t cancelled the show.

Lucky for us! And how is the Swedish Empire Tour going so far?

Way better than we expected actually! We are really happy with not only how many fans there are, but there seems to be an increase of people that are not coming for only one song. The majority of the crowd actually sings along in almost any song we play, which was not what we expected!

Well you have some very powerful songs throughout all your albums! 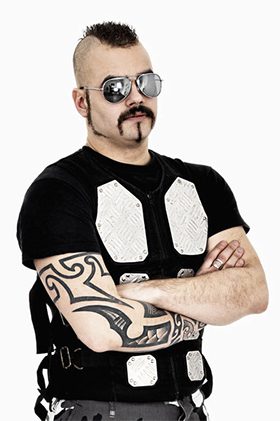 Thank you! We do our best, so I think we made a right choice with the setlist.

So, last May you released “Carolus Rex”. How have the fans received your new album?

There was a little bit of “what the fuck!” reaction when we announced that there was gonna be a release in Swedish. But obviously we thought it’s gonna be of course we’re gonna release it in English. When we laid the news that the album was going to be available in Swedish, some people thought that it would be available only in Swedish, so we had a few people screaming really loud. As soon as people realized that and with the album out, most people were a bit surprised that we didn’t do the expected thing, like World War II area. So, a little bit of a surprise there, but other than that it turned out very good. Most people seem to like it, once they got used to the idea that it’s not about the Second World War.

Have you ever thought of experimenting on that and try new stuff, other than battles?

Maybe we’ll do an album one day called “Cease Fire” (laughs). In general, we are very interested in history, especially military history. It’s what we want to do and what the majority of our fans want to hear. So, as long as we want it and the fans want it, there will be no change in the foreseeable future. Why change something that everybody likes?

That’s true. And it’s a subject that fits metal.

Yeah! And even if nobody ever gets killed from now on, ever in war, we’ll still have enough material for one hundred albums

That’s really unlikely though; that there won’t be any more killings…

Just before “Carolus Rex” was out, four members of Sabaton parted ways and you found their replacements right before your tour. What was the reaction of the fan towards the new members?

In the beginning it was kind of negative, but as soon as we started playing, that changed quite quickly. In general, I’d say 90-95% of the reactions have been polite and nice, or very positive. There are a few, of course, who have a personal connection with some of the band members that left. It’s understandable.

True. A bit more about your new album now. For the first time you created a concept album in the full sense of the word. Was it more difficult to create it than your previous works?

Yes and no. “Art Of War” was about as hard to create because basically you have a theme, or several subjects you’ve got to fit in, and the subjects have to fit with the songs, but it also has to fit the storyline you are telling. For example, this song is an aggressive one with an aggressive subject, so we have aggressive subjects here, here, here; that’s a possible way to do it. Sometimes, 90% is done like a puzzle, if you will, and then you have to tear it all apart, because the final pieces of the puzzle don’t fit in. So, in that sense we’d rather start back from the beginning, because there’s not only the story to take care of but also the dynamics of the album. It’s not nice if you start with five slow songs and end up the same. Taking that into consideration, you can’t really sing happy, happy, joy, joy when you sing about people dying for example. So making all these things fit together is kind of a tricky part. But I think it worths it. 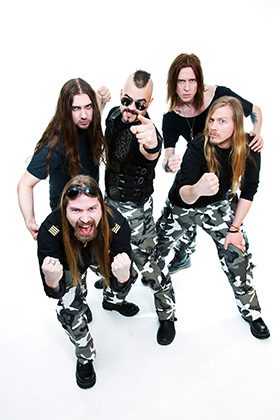 How come you did not make an album about the history of Sweden before, since you are Swedish?

Oh well, in a sense, it’s a little bit politically connected in Sweden and we didn’t want to be at all. For some reason, Swedish history is connected like that, but especially the first in “Carolus Rex” is kind of loosely connected to the right wing in Sweden. Mainly because they use him as a figure of the wrong, which I think is fucked up. But at this point, I think that we have established enough as a band, that we could do it. We also basically wanna make a statement that military history has nothing to do with politics.

I see. And was it difficult to adapt the songs to both languages?

Yes and no! They were very similar in the amount of syllables used. Sometimes we wrote the Swedish version first and then we wrote the English and sometimes we wrote them at the same time. Actually the hardest part for me is to remember in which language I am singing (laughs). Writing it and doing it in the studio wasn’t a problem!

In the special editions of “Carolus Rex” you included three covers of Amon Amarth, Status Quo and Rammstein. How did you end up in doing these covers?

(Laughs) Well, both the Rammstein and Status Quo songs are military related, so that was the connection there. When it comes to the Amon Amarth cover of “Twilight Of The Thunder God”, it’s just that we think it’s a great song and we also tried to make a statement that if you do a cover, it doesn’t mean that you totally remake something that was made in the 70s. You can make your own version. Musically there’s no big difference at all. Of course, we added some synthesizers to it, and I added some vocal melodies.

Yeah! It is fun! But it’s obviously coming back; it’s not the same magical experience that’s the first time. Back then, that was the first cruise ever done, there were no pictures, nobody knew what to expect, how the ship is going to look like, what the stages are going to be like. So that was big surprise and quite a magic trip. This one was a shitload of fun!

And it must be chaos with all the fans and the crew and the bands in the same space!

Let’s just say, it’s hard to find any kind of privacy. But you get used to it. You think, ok, there are about 2000 metalheads on this cruise and I could hide, that’s option number one, which is gonna be boring because it means I’m going to be staying in my cabin. So I figured, if I’m out, running around, having fun, being drunk, sooner or later I must run into most of these people. And out of these 2000, not everybody is going to care about Sabaton, or even like us. I figured that maybe half the boat wants an autograph or a picture, oh well I can do that! And then they’ll leave me alone (laughs)!

So, I believe, and many would agree with me, that this period is one of the best for Sabaton. In your opinion, in Sabaton’s course, what was the best moment or one that stayed in your mind? 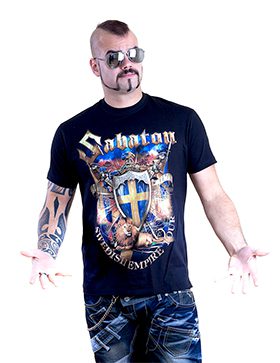 Oh there are several ones actually! In one sense, it has to be what we did last August in Poland. We recorded it for a DVD, which will be out later this year. The show was called Przystanek Woodstock Festival, 600.000 people were watching the show. It was massive. Of course, having that amount of people in front of you, we had the normal stage pyros and two smalls, we had to use fireworks, it was crazy.

Last time you were in Greece, in 2009 in Athens, that wasn’t the best time really…There were strikes going on and demonstrations on the streets and as a result, the attendance was a bit low. Before you booked the show here, were you apprehensive at all that you might have to deal with this situation again?

No, not at all. I think people wanna see heavy metal, no matter what’s going on around them. And also one of the main reasons why we haven’t come here before is actually that we wanted the time, because we were touring all the time. Greece isn’t really next door to Sweden. And we wanted to able to bring the full production, which is so typical now that it got stuck in the two borders, so now it’s waiting in Sofia.

What do you expect today from your Greek fans and what should we expect from Sabaton?

Well, judging from the last time we were here, I remember there weren’t so many people, as you said, but they sounded like an army, volume-wise! And judging from yesterday, it was a really loud show, and I’m not talking about the band, I’m talking about the crowd! Sometimes I think half the crowd knows the lyrics better than I do! If I ever forget the lyrics, I’ll just motion the microphone to the crowd and go “yeah!”. With the setlist, we are doing a little bit difference here than in the rest of Europe. Other places have had the chance to see us before. And there are some songs that we are not playing here and other songs that we are. I think that we have one or two more songs here.

That’s great for us! Are you going to sing anything in Swedish?

Yes! We have several places in the set when we ask the crowd “what do you wanna hear?” And at one point we had so many mails requesting that we play something from “Carolus Rex” in Swedish. So, one time we let the crowd choose between “A Lifetime Of War” and “Carolean’s Prayer” and that was it.

Thank you for your time! The last words are yours! Anything you wanna say to the Greek fans and the readers of Metalpaths?

Nothing else but thank you for the support and thank you for being so patient! Sorry it took us 4 years to come back. It’s not gonna happen again!