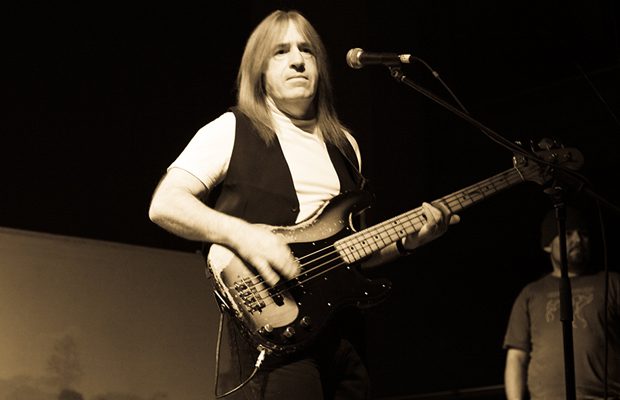 Longtime URIAH HEEP bassist Trevor Bolder has died of cancer at the age of 62.

Bolder joined HEEP in 1976 as the replacement for John Wetton and made his recording debut with the band on 1977’s “Firefly” LP. He played on three more albums before joining WISHBONE ASH. In 1983, he returned to URIAH HEEP and has appeared on all of the band’s studio albums since then, including their most recent outing, 2011’s “Into The Wild”.

Said URIAH HEEP in a statement: “It is with great sadness that URIAH HEEP announce the passing of our friend the amazing Trevor Bolder, who has passed away after his long fight with cancer. Trevor was an all time great, one of the outstanding musicians of his generation, and one of the finest and most influential bass players that Britain ever produced. His longtime membership of URIAH HEEP brought the band’s music, andTrevor‘s virtuosity and enthusiasm, to hundreds of thousands of fans across the world. He joined the band in 1976 and, barring one short break, was a fixture until his ill health forced him to take a step back early this year. Prior to joining HEEP, he was a founder and ever-present member of David Bowie’s legendary SPIDERS FROM MARS band, performing on all of their key albums and at countless shows. He also performed withWISHBONE ASH, CYBERNAUTS and THE RATS.”

Added URIAH HEEP guitarist Mick Box: “Trevor was a world-class bass player, singer and songwriter, and more importantly a world-class friend. He will be sadly missed by family, friends and rock fans all over the world. We are all numb to the core.”