Frontman of Mystic Prophecy and Valley’s Eve, producer and now frontman in a Hard Rock band called Devil’s Train! RD Liapakis seems to have done it all, and is ready for some rockin’ action. Metalpaths caught up with him to have a more rock n roll discussion on the typical subjects that can be of our interest, such as their new album “II”. Phones rang, phone issues (my personal apologies to Dimitris for that), hell even the interview procedure was rock n roll-flavoured. Now it’s done, so grab your shot of whiskey on the rocks, and enjoy…

Good afternoon Dimitris! The new album “II” came out in January 26th. What do you think now that it’s done?

It’s exactly what we wanted to do, along with Lakis, a strong back-to-the-roots 70s-80s rock n roll album. It had a great response, especially in the US and UK, which are harder markets to be successful at. Because when you’re a Greek-German-Finnish rock band, it’s harder to step next to huge names like Whitesnake from the UK, Black Stone Cherry from the US. The album came out a month ago, and in the German charts, which are something over the top for us Greeks with only Greek bands in there being Mystic Prophecy, Devil’s Train and Suicidal Angels, things are going really well. We are really happy with what happened, and the music style you listen to on the record is exactly what we wanted to do.

Where would you spot the differences between “I” and “II”?

Look, on the first record, we did that move to see where the band is at the moment. Party 70s-80s, bands like Badlands, Blue Murder, Bad Company. Blues rock n roll with somewhat heavier guitars. On the second record, there’s a lot more soul, blues elements, some stoner elements. The band explored different paths this time, and it sounds tighter, sounds more like a band. In the first album, the members didn’t quite know each other, even though the chemistry between me and Lakis is extremely good, and there was no problem in arranging the songs. So the first album was more Heavy rock and the second one was more “Whiskey blues rock” as the Americans call it. We’ve kept the style of course, Hard Rock with lots of groove. 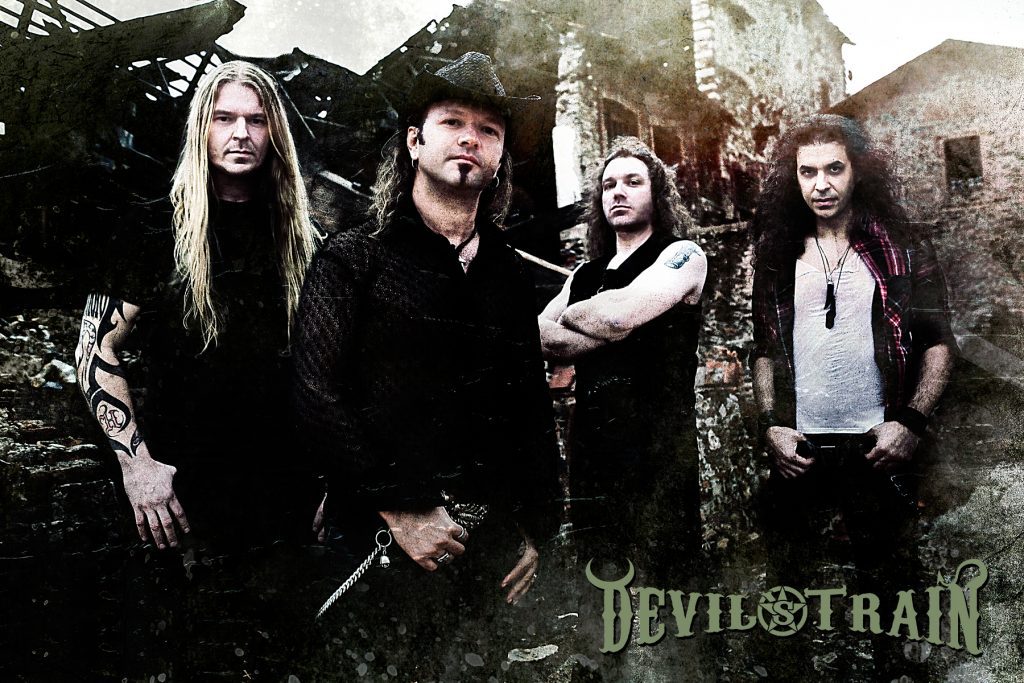 What lead you originally to start this Hard Rock project? And in general, how did it all start?

So, I’m a man of a certain age, and I was raised on such bands, you know Bad Company, Led Zeppelin, Deep Purple and these are the roots for all of us who started listening to music back then. Heavy metal came around 80-81, we were all influenced by it, we formed Mystic Prophecy, but in me I always wanted to do a band in the style of the 70s 80s stuff I mentioned earlier. So I was looking for a guitar player who knows this kind of music, you know it’ really hard to find young guys who are into that kind of music. So I looked here and there and I was lucky to find Lakis Rakatzas through Chrysafis, the drummer of Crystal Tears, that I was in the studio with, who talked to me about it. I’ve never met that guy before, I didn’t know him personally. So he sent me something, I liked what he did and so we came together and started this band. The thought was for it to be a project, but as we played and when we went as Crystal Tears on tour with Stratovarius, Jorg loved the songs and he asked us whether we would record an album, cause he wanted to play drums in it.

Which is that element in your music that you think it’ll make Devils Train stand out?

I was asked that question before. I think that if you take a look at the scene, like you do cause you take a lot of records to listen to, especially in Germany where the rock/metal market is bigger, there were 130 releases this month, including the Devil’s Train record. And I think it’s the only one that has this groovy American style, the rest of them were either Power metal or Thrash metal. I think this album attracts people around the ages of 35-40 years old, and that’s true because our label gets pre-orders and sees the age of people that buy our albums. It sets itself apart cause it has that 70s-80s back to the roots feeling. I don’t know if there’s an album out this month, the previous one or the one to come, close to that style. We’re not going to play something that hasn’t been played by many other bands before us, it’s just that this style is getting more rare.

The video for “Hollywood Girl” has everything we love in Hard Rock videos: beautiful ladies, laid back attitude and crazy times. Is that attitude indicative of the vibe within the band?

Look, rock n roll is a way of life, like it is for all the bands we love, Rolling Stones, Led Zeppelin all of them lived their lives. And women are a part of that: beautiful women, sexy women, you know rock n roll is about having fun, going out and playing music for yourself. That rock n roll cliche, Kiss, Motley Crue, they all had that touch. We try to catapult them back to the 70s, those nostalgic 40-year-olds to go back to the 80s and feel like they’re 15-25 years old again. We’re gonna use every cliche possible to create that 80s nostalgia.

You gained your first audience by promoting that video with the cover of “American Woman”. That was an old school strategy back in the 70s and 80s, for cover songs to be the first singles, as you know. Was that intended to be a video for that first album or just something that?

Of course it was intended, we wanted to show right from the start which is the path this band will follow. That’s why we choose to cover trademark songs of that era. “American Woman” was THE rock n roll song when it came out in late 60s/early 70s. Also Steppenwolf (“Born To Be Wild”) in terms of bikers, we use the whole lyrical range as you can see. “American Woman” in terms of women and bikers, and then there’s “Immigrant Song” (Led Zeppelin), lyrically about Sweden and Vikings, but then it was a trademark of that music. And the rest of the album gives an 80s touch with bands like Blue Murder, Badlands, Tesla, a bit of Cinderella here and there, a bit of stoner in terms of tuning, in order to give something interesting to the new fans as well. And as for the covers, we play them so that the people will have fun at our shows. You give them something that they already know, 2 songs they might have heard on YouTube and 10 more they don’t know. So you’re making business, and I think that instead of only killing the people with your own songs you should always give them something to have fun with, create a more easy and cool atmosphere. 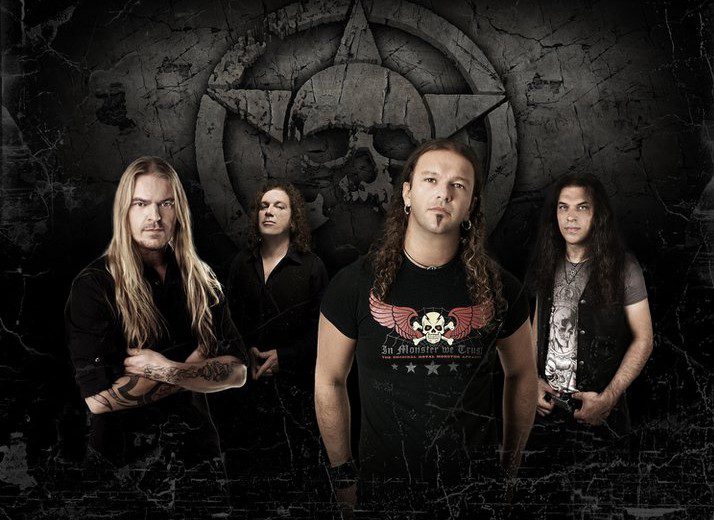 You seem to draw inspiration from personal experiences mostly lyricwise. What else inspires you to write lyrics?

It’s a lot of stuff in general. I don’t limit myself. I just give the song a title and try to think of lyrics based on the title. For instance, “Mr. Jones” deals with death, Death is Mr. Jones, a rocker who shows his whole life course, every rocker cliche, he’s raised by bikers, spends his life in strip clubs etc and even when he’s at his funeral, bikers take him there! The whole album deals with women, OK? Lots of issues, from personal stuff, to stuff that have happened here and there. Cabaret, porno stuff. The whole woman thing, includes one more cliche: sex. And all our videos have that, this band quite frankly revolves around this cliche. Woman, rock n roll, the stage, how a man can survive this rock n roll lifestyle for 25-30 years of his life and have a good one. Music for us is fun, not something we’re forced to do. And women hopefully are a big part of this.

The albums’ already out about a month now, so there are some festivals and clubs asking us to do a live show. We’re looking at them all, so that in the next 2-4 months we’ll play at some clubs. We’ve already been booked by five MC (Motorcycle Clubs), by the whole image of the band and ever since the first album, we had the biker touch, so we’re booked at many festivals where only bikers go. We’re talking like 5 000 – 10000 people. And we got a lot of shows from such clubs. We’re asking whether we can play at Wacken festival, Summerbreeze, lots of big festivals. And towards the end of the year, around September/October, we’ll look for a european tour. 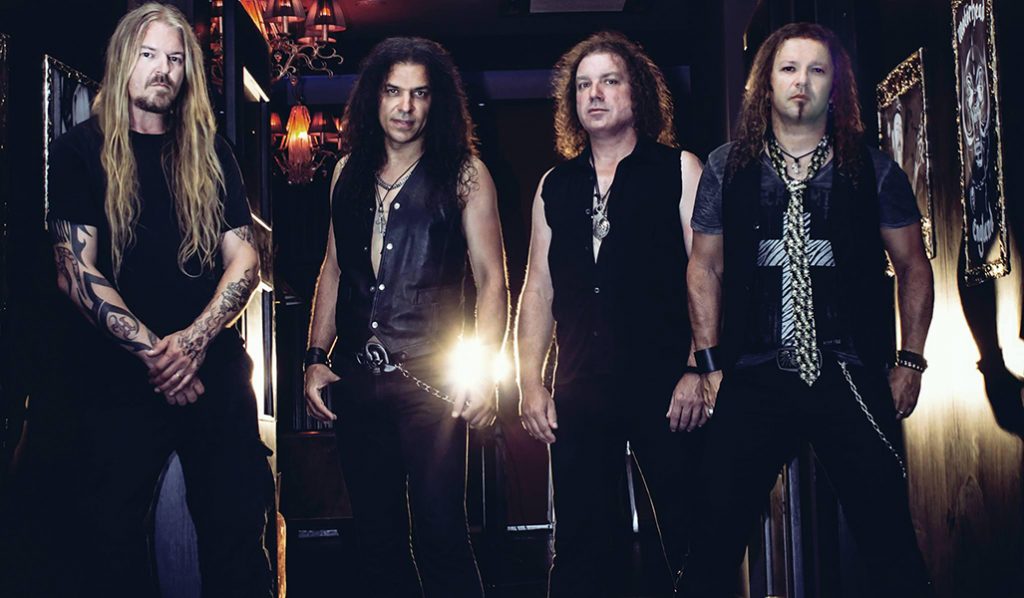 Will the tour be including Greece?

Wow that’s a hard question! I don’t know how things are going politically in Greece, but there is always hesitation, due to the fuckin’ political issues. They confuse everything, “are you going to play in Greece?” “will they be able to pay you?” so things go elsewhere. I can’t tell you whether there’s interest for Greece or not at this point. Devil’s Train (even though we’re two Greeks) we should have a bigger audience, which is not I expect from the people. People will listen to whatever they love to. So no one has ever called us from Greece to play, we’ll see and if we find something, I’d be more than happy to play at my home-land, no question about it.

That was about it Dimitris! Thanks a lot for the interview, it’s been an honour. The final words are yours.

Lots of cheers to Greece, stay heavy, hold on tight, with all that shit happening down there. Anything that’s happened with that politics shit, it’s not the peoples’ fault. Lots of cheers to the rock fans of Greece, hope they’ll give a chance to Devil’s Train, and a big thanks to you for giving us the chance for an interview.