Queensryche: “If I Were King” Cd Single Available For Download 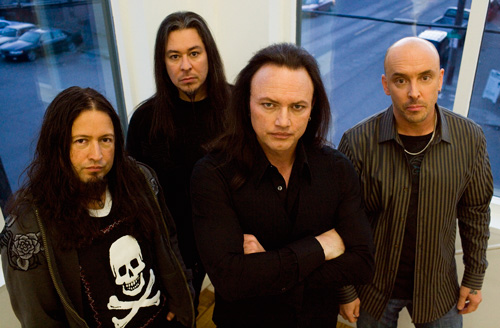 “If I Were King” the first single from Queensrÿche’s highly anticipated new album AMERICAN SOLDIER, is now available for download from all digital retailers. “If I Were King” was written based on an interview lead singer Geoff Tate conducted with Sean Lenahan, a veteran of U.S. conflicts in Somalia and Kosovo. Some chilling sound bites from Tate’s interview with Lenahan can be heard at various points in the song. The song is also streaming at myspace.com/queensryche.

“This is a song about loss and healing,” says Tate. “A soldier who lost his friend in a firefight and spent a lot of time afterwards struggling with his feelings, wishing he could have done more to save his friend. The song is saying if I were king, if I could do anything, I’d have you back in my
life again, back by my side. I thought that was a very interesting and inspiring viewpoint.”

Queensrÿche has also set up the phone number (206) 260-1215 for fans to call and get updates on the new album and tour directly from Tate himself. The number also has an option where fans and soldiers can leave a message for the band. Every day starting on March 20, a new 30-second preview clip of one of the songs from AMERICAN SOLDIER can be heard by calling the number, leading up to the March 31 release of the album.

AMERICAN SOLDIER features a dozen songs inspired by numerous interviews with veterans conducted by Tate, who was intent on telling their story using their words. After speaking with soldiers who served in various conflicts–from World War II to Iraq–Tate turned their firsthand experiences from the frontlines into an unflinching musical examination of war from the soldier’s perspective.

Queensrÿche will launch an extensive tour of the U.S. on April 16 at the Snoqualmie Casino outside of the band’s hometown of Seattle. The shows will be presented in three suites, with the band performing sets from AMERICAN SOLDIER, Rage For Order, and Empire.