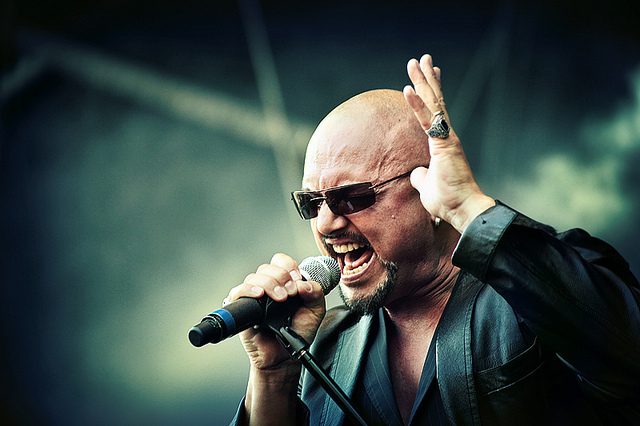 Shawn Perry of VintageRock.com recently conducted an interview with QUEENSRŸCHE singer Geoff Tate. A couple of excerpts from the chat follow below.

VintageRock.com: Earlier this year, you released an album, “Frequency Unknown”, which I believe was the first album of yours under the QUEENSRŸCHE name without the members of the other QUEENSRŸCHE. And I read that there were some issues early on with the mix, which were later resolved. But overall, were you pleased with that record? I’ve been listening to it and it sounds really good to me.

VintageRock.com: Are you preparing a follow-up to the album?

Tate: Yeah, we’re working on a new record now. I’m about … I don’t really know where I’m at with it. I’m in bulk writing mode where I write every day and put ideas down in a rough form and typically I’ll go back after a few months of doing that and see what I have and then piece together an album out of good ideas that I’ve got recorded.

VintageRock.com: As I’m sure you’re aware, the other QUEENSRŸCHE released a record this year. I don’t suppose you heard that or listened to it at all, did you?

Tate: No, but I heard they released one.

VintageRock.com: It gets a little confusing with there being two QUEENSRŸCHEs and I did read in a recent interview with you where you discussed the issue of who gets to keep the name, and that whole issue will be resolved next year. Is that correct?

Tate: Yeah. We have a court date that was set for November that recently got pushed back to January. So that’s when our actual court date will happen, is at the end of January.

VintageRock.com: Why is it important to you to keep that name?

Tate: Well for me, it’s my life’s work. It’s…what you hear when you listen to a QUEENSRŸCHErecord is my ideas. My hopes, my dreams, my fears, my fantasies — all the stuff that is me is in those records and those songs. I’ve worked tirelessly over the years to protect the name, to bring value to the name, and I just can’t give it up. It’s me. It’s who I am.

VintageRock.com: Do you have any sentiment for the other guys — do you miss playing with them at all? Or are you just kind of moving forward and you’re digging playing with new guys? What’s your feeling on that?

Tate: Oh, I’m really interested in playing with the guys I’m playing with now. They’re all really fantastic musicians and we have a generally good time when were on the road. It’s a bunch of personalities that really work well together. And I’m just digging it. It’s a happy scene.

Tate: Yeah, it is. It’s no fun to go to work and not get along with the people that you’re working with. It’s much better if you’re hanging out with people for days on end and hours on end to be able to laugh and have a good time and enjoy life.

Read the entire interview at VintageRock.com.