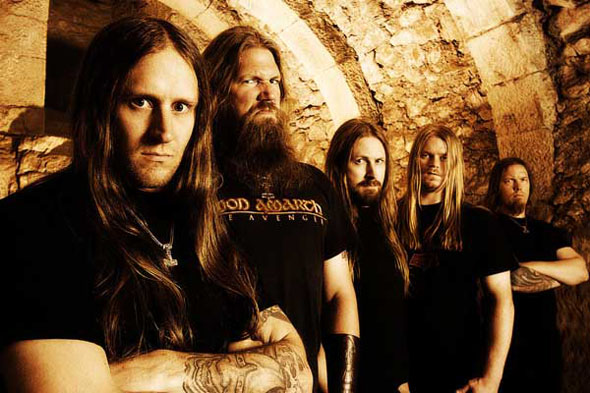 “Guardians of Asgaard”, the new video from Swedish viking metallers AMON AMARTH, can be viewed below. Also available is a a five-minute clip featuring behind-the-scenes footage from the making of the video.

“Guardians Of Asgaard” comes off AMON AMARTH’s seventh full-length album, “Twilight of the Thunder God”, which sold more than 11,000 copies in the United States in its first week of release to debut at position No. 48 on The Billboard 200 chart.

“Twilight of the Thunder God” was recorded at Fascination Street Studio in Örebro, Sweden and features several high-profile guest appearances including ENTOMBED singer L.G. Petrov (on “Guardians of Asgaard”), CHILDREN OF BODOM guitarist Roope Latvala (who shreds a fierce solo on the track “Twilight of the Thunder God”) and Finnish cello metal band APOCALYPTICA (a guest appearance on “Live For The Kill”).

The video for the title track off “Twilight of the Thunder God” was filmed on the old Viking site, Jomsborg, home of the Jomsvikings in Wolin, Poland, with the Polish team Group 13 and director Dariusz Szermanowicz. The song features a guest appearance by CHILDREN OF BODOM guitarist Roope Latvala.

AMON AMARTH is having its first four albums reissued in 2009. The series kicked off with “Once Sent From A Golden Hall”, which was released on February 27 in Germany, Austria, Switzerland and Italy and March 2 in the rest of Europe as a double-popup-digipak featuring two discs. Disc one features the entire “Once Sent From A Golden Hall” album remastered plus the bonus track “Siegreicher Marsch” (German version of “Victorious March”). Disc two features the live recording of the show AMON AMARTH played on December 28, 2008 in Bochum, Germany where they played the album in its entirety. The order of songs is the same as on disc one (excluding “Siegreicher Marsch”). This reissue (and all the other ones that will follow later in the year) was released as an eight-sided double-figipak with individual pop-up. All four pop-ups attached to each other show a special three-dimensional pic. The reissue also features liner notes by the band and was released for the price of a regular CD.