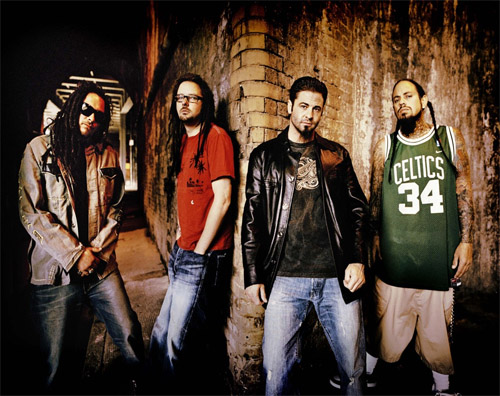 What’s Up magazine recently conducted an interview with KORN frontman Jonathan Davis. A couple of excerpts from the chat follow below.

What’s Up: When can fans expect a new KORN album?

Davis: KORN is working on it. Getting started getting into it. The guys are doing the writing; I haven’t been around. I always take myself out of the first part of the writing process because I always sing melodies, then tell the guys to play stuff on guitar, and I screw myself because they should have been vocal melodies. So I let them write the songs first, and then I come in and do the vocals and the melodies later.

What’s Up: What are some of the themes going to be lyrically for this next album?

Davis: Yeah, it’s gonna be a concept record. I have these five symbols that I’ve come up with that I think are the downfall of man. And each symbol is going to have a couple songs about it and go through in order, and then a couple songs about how they are all tied together. That’s just my general brainstorm right now. I’ll get more into it when I hear the songs and start writing the lyrics.

What’s Up: What are the five symbols?

Davis: First one is drugs, the pharmacy side — a person who is not medicated or medicating themselves some way to deal with life. Second (is) religion, organized religion. I don’t mean spirituality but religion in general, where people are controlled and believe their god is better than another god. Third one is the power symbol — most all humans are power hungry. Fourth is the money sign. People will do anything for money. Money — just the concept of it is stupid, and it’s a pretty f*cked-up thing. The fifth one is time. It’s our biggest enemy of all. Everyone is always battling time; people don’t have time to do this, people don’t have time to do that. They spend millions of dollars to buy Botox trying to buy time. I think it’s a killer of all of us.

What’s Up: Is Ray Luzier going to be a permanent member of the band?

What’s Up: How’s he working out?

What’s Up: You’ve worked with Lil Wayne a couple of times and even did a remake of his song “Got Money”. Why?

Davis: We only worked with him once. On his video, he asked us to be a part of it. I just liked that “Got Money” song with T-Pain and him. I just did the cover of it for fun, and I put it out for free for kids to download. I just like the way he raps and his style.

Read the entire interview from What’s Up magazine.