Sonic Excess recently conducted an interview with guitarist Andreas Kisser of Brazilian/American thrashers SEPULTURA. A couple of excerpts from the chat follow below.

Sonic Excess: With SEPULTURA’s 11th studio album “A-Lex” having been released nearly a year ago, are you happy with the final result, or looking back now, would you change anything?

Andreas: I am very happy with “A-Lex”. The album came out in January and we did two tours in Europe. We still want to go back there and a few other places we haven’t been to yet. We played Argentina with IRON MAIDEN and it has just been a great tour. But I am very happy with the album; it was inspired by the film “A Clockwork Orange” and an amazing book. We did a version of ninth symphony from Beethoven, so it was a great experience to record that album especially with a new drummer. This album has presented up with a lot of possibilities, we are thinking about playing the album with an orchestra.

Sonic Excess: That sounds like a good fit. Now would you say “A-Lex” is SEPULTURA’s most progressive album to date? I thought much like the film “Clockwork Orange”, “A-Lex” was ahead of its time. Was SEPULTURA worried that some people might not understand it? 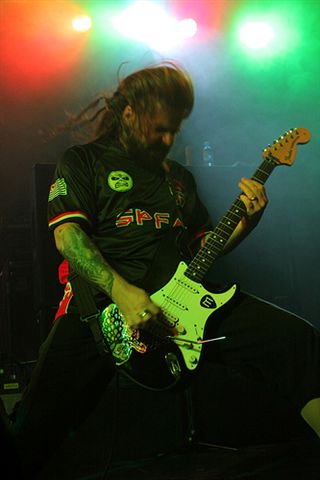 Andreas: Not at all. For SEPULTURA this has become so common to bring something different. Of course, we lose and gain fans in doing that. If you put together all of our albums, they are all different. That is the way we are, always looking for something new. We cannot please everybody, that’s impossible and hopefully we never will. I think it’s good to have some criticism because that will show you stuff you don’t see.

Sonic Excess: SEPULTURA is coming up on 25 years together, and to celebrate, you will be releasing a DVD. Will this be career highlights along with the orchestra to?

Andreas: Definitely, that is the idea. We want to play our role in history. Even songs we have never played live and we will play more known SEPULTURA songs to that will be represented with an orchestra. We are working with the same guy who did arrangements on the “A-Lex”.

Sonic Excess: Out of all that time in SEPULTURA, you must have thousands of high points, but what is the one you think about most when reflecting on SEPULTURA’s career?

Andreas: I think the whole thing is just amazing that we are still here, with so many changes like Max and Igor Cavalera leaving the band. We have kept the same spirit through the changing times. When SEPULTURA started, we just had fax machines. Technology has changed so much, is so amazing.

Sonic Excess: It has been a few years since SEPULTURA came to the US. Is a tour in the works?

Andreas: Yeah, man. We are trying to put a package together but it has been very difficult to tour America the past couple years. Hopefully by the beginning of next year, we will be touring. I lived in Phoenix, Arizona for 10 years so we have many friends and people I want to see. We really want to play to the fans and show them the new material.

Sonic Excess: SEPULTURA played several festival dates over the summer in Europe and shared the stage with SOULFLY. Did you ever give any thought about having Max Cavalera (former SEPULTURA vocalist and guitarist) join you for a song onstage or a beer offstage?

Andreas: I wish that would be possible. It’s the first time [at the Devilside Festival on June 28, 2009 at Landschaftspark in Duisburg-Nord, Germany] that we [SEPULTURA and SOULFLY] have played together since he left the band. It’s kind of ridiculous after 14 years it took that long to happen. It was cool; they played a little bit later than us. I talked to people that that I have not seen in a long time. There were no hard feelings; I know there has been a lot of shit talked through the press but no hard feelings. I respect whatever decisions he made to leave SEPULTURA and whatever he wanted with a solo career with SOULFLY and CAVALERA CONSPIRACY. It is great to see the brothers getting together again so it’s cool. We are doing our stuff but it was great to see some people we have not seen in such a long time.