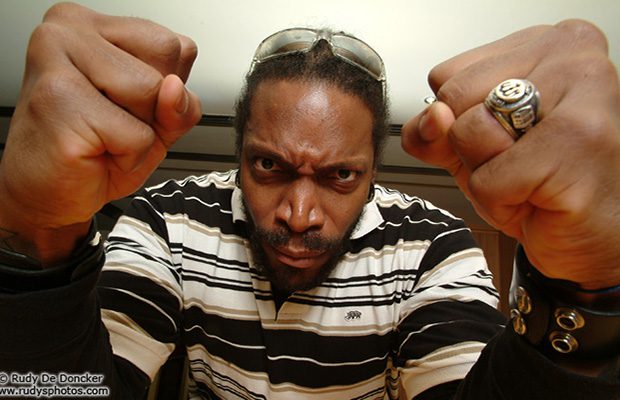 SEPULTURA frontman Derrick Green, an American national who has called Brazil home for most of the last 16 years, says it is “good” that people are criticizing the Brazilian government for spending billions on hosting a football tournament when that money could be better directed towards alleviating poverty.

Speaking to LoudTV.net at last weekend’s Hellfest in Clisson, France, Green said about protests from Brazilian activists interested in drawing attention to their country’s persistent problems of poverty and inequality: “A lot of the stuff that people are talking about, it’s good, because the fact is that a lot of the money and everything has been going into the wrong places. And especially, they shouldn’t have been having a World Cup there — even though it’s the biggest dream of a Brazilian to have a World Cup in Brazil. But I don’t think a lot of people realized what FIFA [soccer’s world governing body] was about. And that’s a big problem. I mean, if you look at the history of FIFA and what it’s done to certain places, you would really understand how wrong it can go. But it’s gone horribly gone there [in Brazil], because it was already corrupted to begin with, and when you add those two together, it’s just gonna be an even bigger amount of corruption. So all those things that people are talking about, it’s good that people are actually talking about and kind of waking up Brazilians, because there’s a lot of things that were problematic way before the World Cup that I recognized, just being an outsider so it’s easier for me to see those different things, especially coming from the U.S., where they have their own problems as well. But the first time entering Brazil, I realized, I was, like, ‘Wow. There’s a lot of education that’s needed,’ number one, with hospitals and all this stuff.”

He continued: “People get psyched on the propaganda of the World Cup and everything. It’s the biggest sport in the world and, of course, Brazil has been a five-time champion, so it’s in the blood of Brazilians.

“It’s unfortunate that all this money was wasted on… I feel… I’m a fan of sports and everything, but I’m not fanatical, and I understand there’s much more important things that are needed in the country than a football stadium that nobody’s going to go to after the World Cup is done. It’s just a strong wake-up call, like I was saying. But hopefully people will see things differently now….

“Like I was saying, coming from the U.S., where they designed that whole idea of mass propaganda — it’s such a genius way to manipulate people, and it’s neverending, but people don’t understand the power that it has. And especially growing up in the U.S., you’re bombarded by it every day where you become completely numb to what’s really going on, and I grew up with that way. But living in Brazil now for almost, or being outside the U.S. for 16 years, I’ve really been able to see all these different changes and how effective it is.”

SEPULTURA‘s new album, “The Mediator Between Head And Hands Must Be The Heart”, sold around 1,800 copies in the United States in its first week of release. The CD came out on October 29, 2013 via Nuclear Blast Records.