Metallica, Slayer, Megadeth And Anthrax To Share Stage In Europe

METALLICA’s official web site has been updated with the following message: 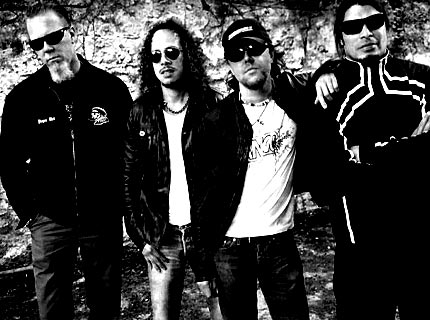 “You’ve been posting and chatting about it for months and we’re here now to confirm it . . . METALLICA, SLAYER, MEGADETH, and ANTHRAX will all share the same stage fo the first time EVER! Look for the four of us at the Sonisphere shows in Warsaw, Poland and Prague, Czech Republic on June 16 and 19, 2010, with a few more of the festival dates still in the works. You can be sure these shows won’t be the only ones.”

Commented METALLICA drummer Lars Ulrich: “Who would have thought that more than 25 years after its inception, thrash metal’s ‘Big Four’ would not only still be around and more popular than ever, but will now play together for the first time…what a mindfuck! Bring it on!”

The announcement on METALLICA’s official web site seems to directly contradict MEGADETH mainman Dave Mustaine’s December 8, 2009 online posting in which he said, “Although there have been many rumors about a reunion of the ‘Big Four’ set to happen in Eastern Europe next summer, the plan never came together for us. We are hopeful that this will happen for real one day and will keep you posted as things develop.”

Rumors of a massive tour featuring thrash metal’s “Big Four” — METALLICA, SLAYER, MEGADETH and ANTHRAX — first began circulating this past summer after SLAYER guitarist Kerry King told U.K.’s Metal Hammer magazine that Ulrich was trying to make the package a reality. Those rumors were seemingly squashed when METALLICA guitarist Kirk Hammett said that the outing would never see the light of day. Kirk said in an early October radio interview, “That tour is not gonna happen. I’ve been hearing that, we’ve all been hearing that for awhile. I get asked about it regularly. And as far as a tour going on, it’s not gonna happen.” When asked why, Hammett said, “Conflicting schedules, conflicting personalities, a lot of conflicting things. It’s a good idea though. And, personally, I can see the significance of playing a tour like that, but… it’s not gonna happen.”

METALLICA frontman James Hetfield recently gave The Pulse of Radio a little more insight into how the “Big Four” tour rumor started. “I think it was certainly spurred on by the Rock and Roll Hall of Fame and getting all these great, nostalgic feelings, you know. And, you know, the more we thought about — ‘Hey, you know what? We should celebrate the Bay Area thrash scene. Why don’t we make a reunion of that or something?’ And it basically morphed into, you know, the Big Four doing a gig together, and how cool that would be. Pretty much it went as far as that.”

Hetfield added that while the idea was looked into, it never really got that far. “We kind of talked a little bit about it, went back and forth,” he said. “No one really looked into it. But then the rumor got out and it’s one of those things like, ‘Well, is it true?’ It’s one of those awkward positions that you’re in — you have a good idea, and you haven’t followed through with it quite yet. But I think it would be a great celebration of the past and where we are now in our lives. I think it would be great.”

Much of the fan speculation about such a tour revolved around the participation of MEGADETH, which is led by former METALLICA guitarist Dave Mustaine. Mustaine has expressed ambivalence about opening for the band that kicked him out 27 years ago and has gone as far as to say that he would not be interested in playing “in the round” (with the stage in the center of the arena and the crowd surrounding), which seems to be METALLICA’s preferred stage setup nowadays.