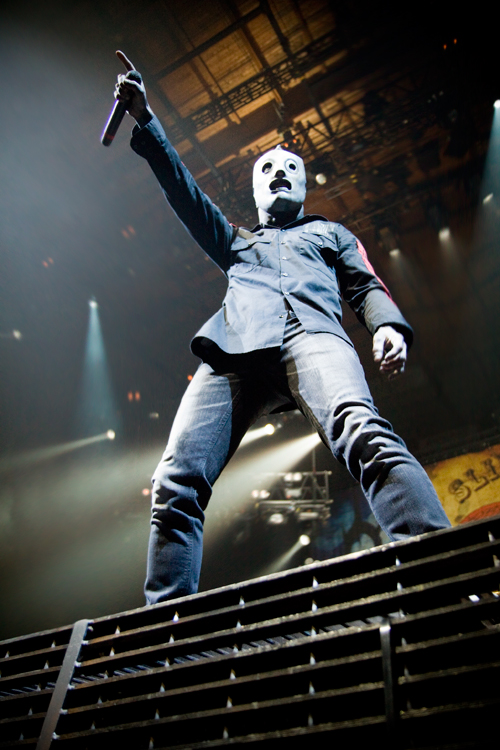 Late SLIPKNOT bassist Paul Gray will be honored by the organizers of the U.K. edition of the Sonisphere festival on July 10, which the band will close with a headlining performance. The festival will hold a two-minute silence at 2:00 p.m. that day in honor of Gray, who was known as “Number 2” in the group. Fans will also be able to leave tributes to Gray in a book of remembrance that will be left open at the Metal Hammer signing tent for the duration of the weekend from midday to midnight each day. The book will be given to SLIPKNOT following the end of the festival.

Speaking to BBC Radio 1’s Daniel P. Carter backstage at the Finnish edition of Sonisphere, SLIPKNOT singer Corey Taylor said, “At Knebworth at 2 p.m. on the 10th we are going to observe a two-minute silence for Paul — in honor of him. I’m really, really glad that everyone has responded to it and are ready to join us for it. It’s gonna be pretty heavy and I’m looking forward to feeling that. There’s something to be said about that which is so loud and so much louder than this band. It’ll be good for everyone to pay their respect.”

The Sonisphere show on July 10 will be the last on this current tour for SLIPKNOT, which is performing for the first time without Gray. The band’s future beyond this run of shows is unclear.

Corey told BBC Radio 1, “We’ve done a handful of [shows so far on this run] and it’s been good with good feedback and a good way for us to say thank you to the kids and celebrate with everybody.” He added, “[At the U.K. Sonisphere] we’re going to have huge booms, fire, Corey makes big boom go boom. We’ve got a really good set together which really celebrates the whole career. It’s very much about the audience, getting them into it and giving something to them and putting on a good, old-school SLIPKNOT show. Enjoying it for what it is. The fans have really been responding to it so far.”

Gray passed away in May 2010 from an accidental overdose of drugs, leaving behind his wife Brenna and daughter October, who was born the following August.

SLIPKNOT percussionist Shawn “Clown” Crahan told The Pulse Of Radio that the support of the group’s fans has been crucial to helping with the grief. “I definitely want to spend just a moment thanking all of our kids out there because, I mean, when you have kids all around the world — Japanese, people in Great Britain, all of Europe, and then everybody in America — when you’ve got all these people coming together to let you know how much he was loved, and how much he’s gonna be missed, and just how important he was to what we are doing, it’s really made a difference.”