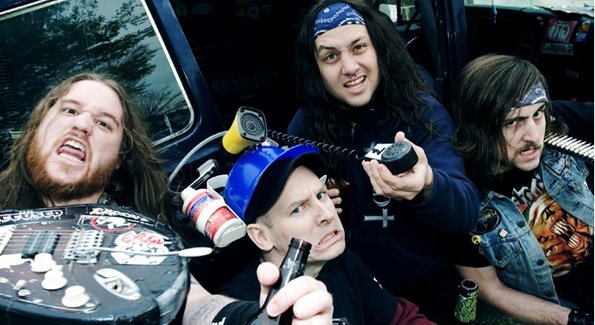 Puerto Rico’s Internet TV show “Rockspot Plus” recently conducted an interview with guitarist Ryan Waste of the crossover thrash metal band MUNICIPAL WASTE. You can now watch the chat below.

MUNICIPAL WASTE will headline the first night of The Metal Suckfest. The festival will take place at New York City’s Gramercy Theater and will feature 20 bands over the course of two days, November 4 and November 5.

MUNICIPAL WASTE will enter the studio later this summer to begin recording its fifth full-length album for a 2012 release via Nuclear Blast Records.

“Massive Aggressive”, the latest album from MUNICIPAL WASTE, landed at No. 10 on the Top New Artist Albums (Heatseekers) chart, which lists the best-selling albums by new and developing artists, defined as those who have never appeared in the Top 100 of The Billboard 200.

“Massive Aggressive” was released on August 25, 2009 via Earache Records.