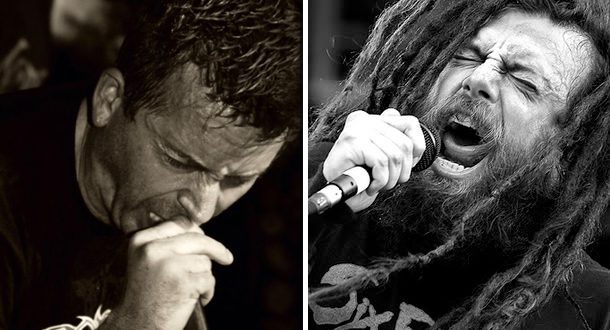 In a posting on his Facebook page, Ryan wrote, “Chris Barnes is a fucking hack. I’ve personally passed on at least five SIX FEET tours over the last eight or so years because he pulls so much nonsense on the support bands because his ego is astronomical.

He continued, “[Barnes] couldn’t handle the fact that we were destroying him nightly on merch and talked shit about us on stage last night. I went to confront him about that and he suckerpunched me as I was talking. He immediately RAN out the door and fled to his bus like he does every night when the two fans that are left for their show are trying to get him to sign something.

“We’re leaving because we have no interest in bringing more people to theChris Barnes show.

“There was no ‘fight.’ He punched me, RAN away and a few people saw it. I just walked out told his tour manager the deal, wrapped up the merch and left.

“CATTLE DECAPITATION is not doing this tour as we no longer wish to bring people to his show. ‘Cause it’s HIS show. More than enough people have drilled that fact into us.

“He says, ‘What about showing some respect?’ I laughed, said, ‘Respect?’ And proceeded to tell him about the time where he spent all night with me outside their bus at the tail end of the ‘Butchered At Birth’ tour [fromBarnes‘ pre-SIX FEET UNDER band CANNIBAL CORPSE] in ’93 and that respect was paid long ago and he’s since proved to the metal world how much of a bitch he is… I got, ‘Dude, in 1993…’ in there and he punched me as I was talking. Ran out the door and seriously thinks he’s a badass still? Hahaha…

“Here’s how Chris Barnes works: punches. Runs. Does the Rocky dance like he’s a badass on his tour bus he’s about to not fuckin afford.”

Barnes responded on his official Twitter page, writing (the tweet has since been removed), “If you eat tofu, you’ll get [your] ass kicked in a fight. #knocked out.”

He then added, “Bottom line: If you break into someone’s backstage [and] start calling them names and get in someone’s face, what do [you] think will happen?

“Oh and [by the way], it WAS NOT a suckerpunch. I didn’t even throw a punch.”