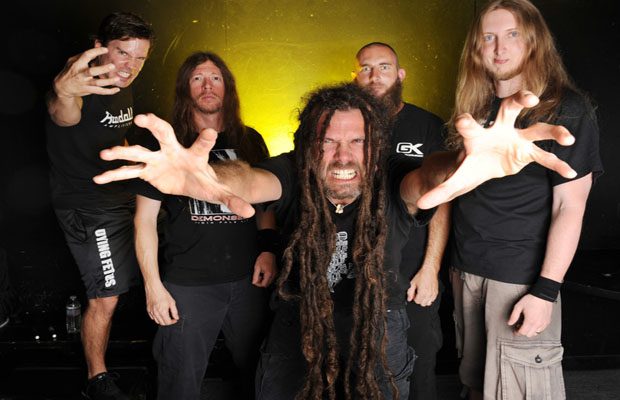 Florida-based death metal veterans SIX FEET UNDER have parted ways with drummer Kevin Talley and have replaced him with Marco Pitruzzella.

Comments SIX FEET UNDER frontman Chris Barnes: “I’m proud to announce a new addition to the ranks of SIX FEET UNDER. Replacing drummer Kevin Talley is our new friend and cohort, Marco Pitruzzella.Marco has worked with Jeff Hughell in their former band, BRAIN DRILL, and is such an amazing talented and great guy. I’m very excited having him in the band and can’t wait to take the stage with Marco this Saturday in Memphis for Scion Rock Fest!”

He adds: “It was good working with Kevin Talley for the past couple of years, but we are very ready and extremely focused on moving the band forward with a new, more stable and permanent lineup for writing as well as touring.

“Be prepared to be shredded! See you all soon!”

SIX FEET UNDER‘s tenth full-length album, “Unborn”, was released on March 19 via Metal Blade Records. The follow-to to 2012’s “Undead”was mixed by Chris “Zeuss” Harris, who has previously worked withSUICIDE SILENCE, ALL THAT REMAINS, SHADOWS FALL and SOULFLY, among others.

“Unborn” was released as an exclusive European box-set edition which included the limited digipak of “Unborn” and a bonus track entitled“Illusions”. Additionally the box featured a poster, a patch, two pins and a sticker plus enough space for last year’s “Undead” album. The bonus track was featured on the vinyl version of “Unborn” as well.

SIX FEET UNDER in May 2012 announced the addition of Swedish rhythm guitarist Ola Englund (FEARED, SCARPOINT) to the group’s ranks.Englund, who made his first official appearance with the band on the “18 Nights Of Blood Tour”, took the place of Rob Arnold (CHIMAIRA).