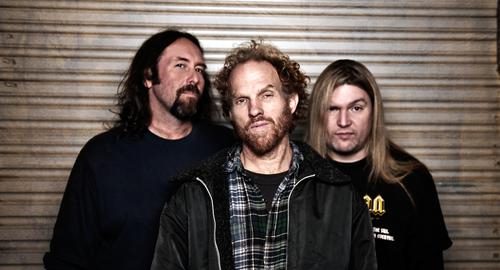 “Feed On”, the new video from Raleigh, North Carolina legendsCORROSION OF CONFORMITY, can be seen below. The song comes off the band’s new EP, “Megalodon”, which was released on November 13 viaScion Audio/Visual, (a.k.a. Scion A/V), the in-house record label and lifestyle marketing division of the Scion marque produced by Toyota Motor Corporation for the North American market.

In a recent interview with Revolver magazine, CORROSION OF CONFORMITY guitarist Woody Weatherman stated about“Megalodon”, “We did that in our hometown of Raleigh, North Carolina, which is kind of nice, to be able to hang around in town and not have to go out somewhere, go to L.A. or New York. Sometimes it’s nice to record at home. You get a little better vibe. Plus I got to use all of my own gear. So it was fun.”

Candlelight Records has just re-released CORROSION OF CONFORMITY‘s “Eye For An Eye”. This special reissue has been remastered/packaged and includes the EP “Six Songs With Mike Singing”. Both titles have been out of print for years. It follows the successful release of the band’s self-titled album earlier this year. A deluxe digibook edition of the album, limited to 1000 for North America, is available at limited retailers and via Candlelight‘s official webstore. The digibook version includes extended liner notes and a rare pictorial gallery.

Formed in Raleigh in 1982, CORROSION OF CONFORMITY quickly transformed heavy music. Politically charged and socially aware, the band has influenced countless others and today remains humble about their accomplishments. With over 1.1 million albums sold in the United States, the band continues to find new fans via nonstop touring.