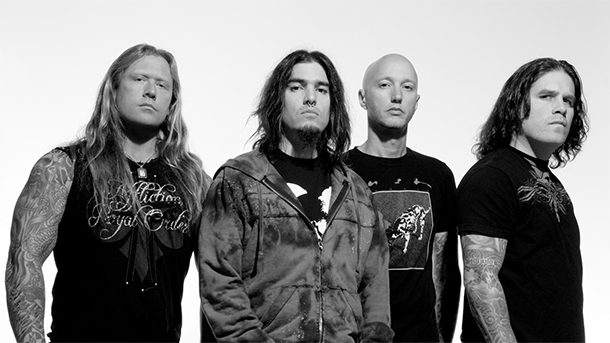 San Francisco Bay Area metallers MACHINE HEAD are scheduled to begin demoing material today (Thursday, April 11) for the follow-up to 2011’s“Unto The Locust” with engineer Juan Urteaga of Trident Studios in Pacheco, California. The band’s vocalist/guitarist Robb Flynn writes on the band’s official web site: “[MACHINE HEAD drummer Dave] McClainand I had a really good jam session on Monday. It was one of those jam days where you feel a breakthrough happen, a day where, for no apparent reason, several things fall into place and start to make sense. It is an amazing-yet-hard-to-explain feeling, but you know that a huge chunk of progress just happened! New riffs flowed, new ideas materialized and new concepts explored. It was definitely one of ‘those’ days.”

He added: “We had one more day of rehearsals yesterday and we’ll start demoing the new tunes today with my trusty engineer Juan from Trident Studios manning Da Tools.

“Phil [Demmel, MACHINE HEAD guitarist] begins his Jackson Guitarsclinic tour overseas for a couple weeks, so it’s a perfect time to demo. I tend to take over the jam room when demoing, so rehearsals fall by the wayside as I track and experiment with a million different ideas.”

MACHINE HEAD in February parted ways with bassist Adam Duce. Flynnexplained in an online posting: “We may have fired Adam on [February 11], but Adam quit MACHINE HEAD well over a decade ago. He just never bothered to tell anyone… but we all knew it.” A replacement bassist has not yet been announced.

MACHINE HEAD‘s most recent studio album, “Unto The Locust”, sold more than 17,000 copies in the United States in its first week of release to land at position No. 22 on The Billboard 200 chart — putting MACHINE HEAD in the Top 25 for the first time in the band’s 17-year history.