FAITH NO MORE IS ‘CONSIDERING DOING SOMETHING NEW’ 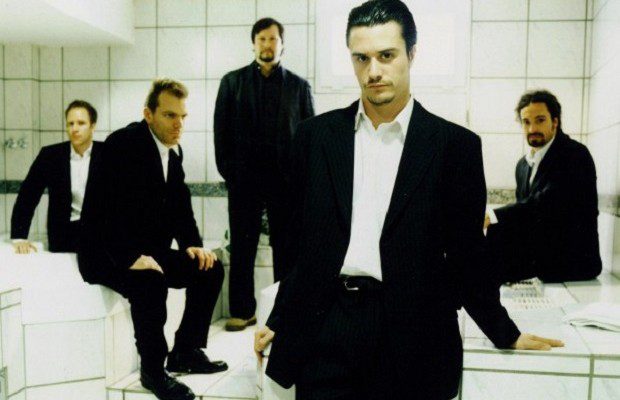 Bassist Billy Gould of the reactivated influential alt-metal act FAITH NO MORE has revealed to Classic Rock magazine that the band may begin work on a new studio album at some point in the not-too-distant future, explaining, “to do something creative would be a really good thing to do.”

FAITH NO MORE recently hinted at the possibility of new music 17 years after the release of the band’s last LP, “Album Of The Year”, and debuted two new songs, “Superhero” and “Motherfucker” — when they supported BLACK SABBATH at London,’s Hyde Park on July 4.

“We’re considering doing something new,” Gould said. “[But] we’re not going to go into a room and bang out a bunch of songs just to put something out; it has to to be right.”

He continued: “Our relationships among ourselves are really positive at the moment, and to do something creative would be a really good thing to do. We’re all at that stage. I mean, we’re still the same people and there’s still the same shit going on, but I think maybe we’re a bit more appreciative of one another than we were fifteen years ago.”

The group, which made a comeback in June 2009 with a headlining performance at the Brixton Academy in London, England and has played sporadic shows for the past few years, launched a new Twitter account and one of the first posts in May was as follows: “The reunion thing was fun, but now it’s time to get a little creative.”

“I think we still have a lot of potential to do really good things, and I think our heads, musically speaking, are in a really good space,” Gould told Classic Rock.

“If anything is to come out of this, I’ll probably have to be one of the instigators. But everybody has to want to do this or it doesn’t happen.

“At this point, no one has a carrot or a stick to use on anyone else. If it comes together, it’ll all be completely consensual.”

FAITH NO MORE singer Mike Patton said in a 2012 interview that one of the reasons the band’s reunion didn’t happen sooner is the fact that they wanted to avoid making it feel like a nostalgia thing — like “Here’s FAITH NO MORE again.” “We wanted it to feel fresh and still somehow vital,” he said. “It wasn’t an money grab. It’s funny to say, but we all kind of reconnected, and after quite a long time we all kinda looked at each other and were like, ‘Man, we actually spent half of our lives together.’ It’s interesting to see it through that set of glasses as opposed to the ones you wore back then. I suppose, at least personally speaking, I’ve grown up a lot since then, and I think I approach the music differently, and I felt better about the music than I did then.”