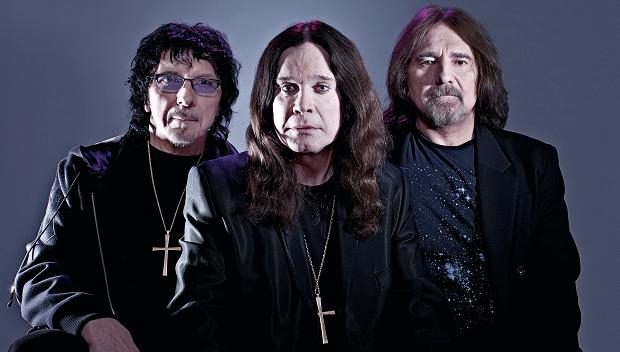 “God Is Dead?”, a brand new single from BLACK SABBATH, can be streamed below. The track, will be made available digitally on April 19, comes off “13” — the band’s first album in 35 years to feature bassistGeeezer Butler, guitarist Tony Iommi and singer Ozzy Osbourne — due out June 11 on Vertigo/Republic. This marks BLACK SABBATH‘s return to Vertigo, their original label, and the group’s first studio album together since 1978’s “Never Say Die!”

The drum tracks on the album were laid down by RAGE AGAINST THE MACHINE sticksman Brad Wilk following original drummer Bill Ward‘s decision to bow out of the reunion.

An invite-only listening party for “13” was held on April 10 at The Montalban in Los Angeles, California.

The following eight songs were played back to a small theater full of select media and VIPs:

Check out a report at the Black Sabbath Online web site.

In its report on the listening party, Loudwire stated about “God Is Dead?”: “Fans who caught the recent video tease the band release will recognize this track. Butler‘s bass work offers a mesmerizing beginning to the song that continues through a majority of the track. Osbourne sings about a bleak future and questions the existence of a higher being, given some of the hard times on Earth. As he belts, ‘Will someone please tell me is God really dead?,’ a musical shift begins to set in with Wilk and the band offering a swinging beat while Osbourne exclaims, ‘Nowhere to run / Nowhere to hide.'”

Ozzy told an Australian radio station that “13” is “mind-blowing,” adding, “It’s better than my wildest dreams; it’s so good.”

BLACK SABBATH will make a rare television appearance when the band performs a new song on the season finale of “CSI: Crime Scene Investigation”. The episode is set to air on Wednesday, May 15 at 10:00 p.m. ET on CBS-TV. The band will world premiere a song called “End Of The Beginning” from “13”. The episode’s plot follows the “CSI” team as they investigate a series of murder that resemble the sins in “Dante’s Inferno”, with the trail leading the detectives played by Ted Danson andMarc Vann to attend a SABBATH concert.