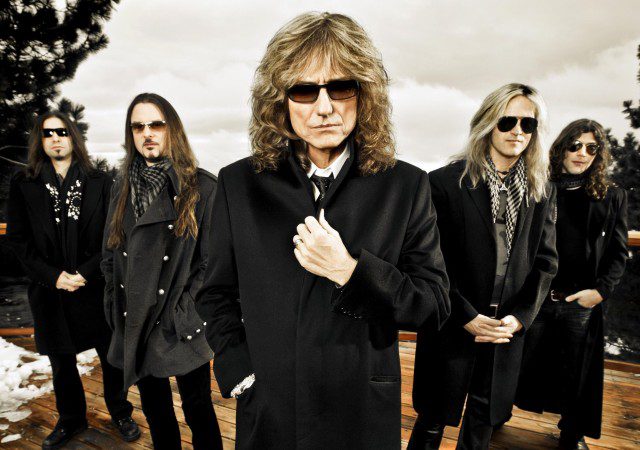 Frontiers Records will release WHITESNAKE‘s “Made In Britain/The World Record” in Europe on July 5 and in North America on July 9. The album will be released in Japan on June 19 via Ward Records.

During 2011, the mighty WHITESNAKE embarked on one of their most successful world tours in recent times, performing 96 shows in more than 35 countries, starting in North America in May until the second U.K. run in December. The request for another live album came from WHITESNAKE‘s incredibly loyal fans — never ones for being notoriously shy about insisting what they want from their favorite musical reptiles. Before heading out on the “Forevermore World Tour 2011”, the decision was made to record every performance on the tour.

After spending the early part of 2012 editing and mixing the WHITESNAKE “Made In Japan” DVD, the production team consisting of The Brutal Brothers (WHITESNAKE frontman David Coverdale and Doug Aldrichand Mikey Mac), had the task of listening to over 90 shows and 130 hours of WHITESNAKE performances. Inspired by the performances from the nine sold-out U.K. shows and a further 87 performances from around the world, the live albums “Made In Britain” and the accompanying “The World Record” were born. The recent “Forevermore” songs shine as brightly as classic WHITESNAKE songs such as “Is This Love”, “Still Of The Night” and “Here I Go Again”, all performed with feverish energy, encouraged by remarkably enthusiastic audiences from Newcastle to Sao Paulo.

Asked about the decision to release two separate live albums — “Made In Japan” and “Made In Britain” — several months apart, WHITESNAKEfrontman David Coverdale told Sweden’s Metalshrine: “We didn’t plan the Japanese project. You know, the Japanese tour was booked and we were invited to headline at Loud Park and I hadn’t headlined a Japanese music festival since 1984, so that was a very exciting premise for me. They made a very generous offer and then asked if they could film three songs for a TV special. We said OK and my co-producers, Doug Aldrichand Michael McIntyre, and I, mixed the three songs and obviously watching the video and going crazy. It looked fantastic and we had them send over the rest of the footage and thought, ‘This could be a fabulous follow-up to ‘Still Of The Night’.’ And where we are now, featuring new songs for the first time. The record company we work with, Frontiers, they were absolutely positive in their response, so we added that to the mix.

“What we’re doing with the ‘Made In Britain’ CD, is giving it a different sonic identity. The CD from ‘Made In Japan’ is a soundtrack and the bonus stuff features behind-the-scenes, soundcheck stuff we recorded in different Japanese venues. Having fun with some our songs, like trying an unplugged version of ‘Good To Be Bad’ and ‘Tell Me How’ from the‘Forevermore’ album. Stuff that people normally don’t get to hear. For the second CD, it’s ‘WHITESNAKE the world record.’ We’re taking songs from all over different cities, like Oslo and there might be a Sweden Rock. I’m not sure if we legally can do that. Stuff from Sao Paulo, Buenos Aires, Rio. It’s two entirely different projects, and for the end of the year, we’re hoping to achieve a limited-edition box set for Christmas, called‘Forevermore – The Complete Collection’, which will have everything‘Forevermore’-related plus outtakes, alternate mixes, acoustic versions of songs, behind-the-scenes footage. Really cool stuff.