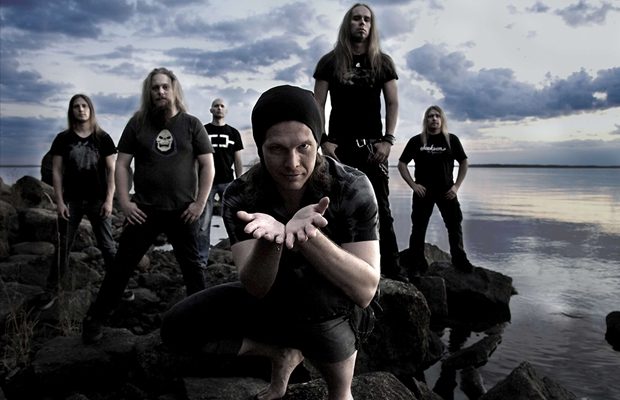 “Formidable”, the new video from Finnish melodic death metallers OMNIUM GATHERUM, can be seen below. The clip was directed by Hannu Mikkola of Visual Vortex at OMNIUM GATHERUM‘s hometown show in Kotka earlier this year as part of the “Beyond” record-release tour.

Says the band: “As you can see, it is not a huge stage, where bands usually do the ‘live-like’ music videos, but we hope this video captured the special feeing of the evening…”

“Formidable” comes off OMNIUM GATHERUM‘s new album, “Beyond”, which was released on February 25 in Europe and March 5 in North America via Lifeforce Records. The CD was recorded by Teemu Aaltoand mixed and mastered once again by Dan Swanö. The artwork for the follow-up to 2011’s “New World Shadows” was created by Olli Lappalainen and can be seen below.

The special edition of “Beyond” contains the band’s brand new cover version of “Subdivisions” by RUSH. OMNIUM GATHERUM guitaristMarkus Vanhala told Soundi magazine: “As pretty much everyone in the band is a fan of RUSH, we decided to take the bull by the horns and make or own bold ‘Omnification’ of ‘Subdivisions’. Besides, Metal Hammerwrote already at the time of our debut album that if OPETH are the PINK FLOYD of this scene, then OMNIUM are likely to turn into RUSH at the very least. It was time to pick up the gauntlet!”

Regarding the musical and lyrical direction of “Beyond”, Vanhalapreviously stated: “It’s now been approximately 10 years since our debut full-length album, ‘Spirits And August Light’, was released and the world was waiting. The latest 2011 album, ‘New World Shadows’, was a good breakthrough for us and lots of good things happened after that record, so, of course, we had some pressures to do a decent successor for that great record as the world was waiting again.

“Well, I think we managed on mastering that task and now we’re back again with the OMNIUM GATHERUM‘s sixth album called ‘Beyond’, the album that is really going beyond all limits of melodic death metal from the winter wonderland! The album follows the good known path of ‘New World Shadows’ and ‘The Redshift’, but adds a lot of new flavors and spices to the good ol’ melting pot to lift the band to a new heights. It’s our most melodic and versatile album so far, but at the same time, it still holds for example the most brutal death metal growls in our career yet as also some really tasteful clean vocals between the lines. I’m sure everyone who gives the album many spins can find something new with every turn, so this should be a album that hold up the sands of time and rewards the listeners who are digging deeper and searching something more than just a one hit wonders of the day!

“Lyrically told, ‘Beyond’ is about the culmination point of one’s existence. It is a coming-home story where the mysteries of duality are melted into oneness but without losing one single point of individuality along the arrival.

“As you can see from the cover, there’s also a strong sense of sea on the album, as we’re the sons of the sea from Kotka!”

“New World Shadows” entered the official chart in Finland at position No. 5. This marked the highest chart entry in the group’s history, having previously landed at No. 24 with 2008’s “The Redshift” and No. 31 with 2007’s “Stuck Here On Snakes Way”.