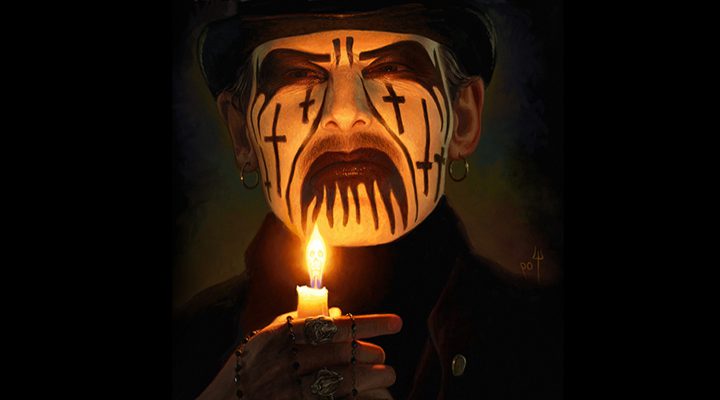 KING DIAMOND kicked off its European tour this past Sunday, May 19 at the Rock Hard Festival at Amphitheater in Gelsenkirchen, Germany. Fan-filmed video footage of the performance can be seen below.

KING DIAMOND‘s setlist was as follows:

Commented the band’s vocalist and namesake: “This is gonna be awesome! Another perfect piece of the puzzle. We have the full backup ofMetal Blade, and there’s an understanding between us that goes much, much deeper than before.

“Our new business setup will noticeably benefit the fans in so many ways. You must have already noticed some of all the cool new stuff that is happening. Now we can’t wait to get out there and start touring again!”

After a six-year touring hiatus, KING DIAMOND triumphantly returned to the stage in 2012 for European festivals Hellfest and Sweden Rock.

In a March 2012 interview with the Swedish metal blog Bara Metal, King Diamond stated about what he did during his year-long break, “Well, we did keep up with people. A lot. We started a thing where… it’s a Skypeweb site where people will sign up. And now and then I will call up fans and we talk. We have done that several times. We will call up three fans through that way, ‘King Diamond is calling you,’ and it could be one from Puerto Rico, one from Sweden, one from Scotland. We pick them randomly, but not the same person twice. Then we sit and talk for an hour. They can ask anything. They usually have a lot of question that are the same as the fans ask in the fan club, the Coven. So we get a lot of info out that way, and we upload it so other can listen to it. We are certainly in touch with our fans.”

When asked if there are plans to release new music in 2013, King replied, “That is absolutely the plan. Something has to go totally wrong for us not to do that. We will write material this fall. Hopefully during the autumn, we might do something here in the U.S., after the festivals. But we will not be doing a long tour, it is still a test, we will see what happens. We do not want to take stupid chances, it has to be done properly. And we have a lot to do still, but things are looking good.”

King, 56, underwent open-heart triple-bypass surgery in November 2010. He has since completed his cardiac rehabilitation program and has stopped smoking entirely, changed his diet and is getting regular exercise.

King Diamond made his long-anticipated return to the stage with hisMERCYFUL FATE bandmates Hank Shermann, Timi Hansen andMichael Denner on December 7, 2011 at the second of four intimate shows at the Fillmore in San Francisco as part of METALLICA‘s week-long celebration of its 30th anniversary as a band for fan club members only.

KING DIAMOND received a Grammy nomination in the “Best Metal Performance” category for the track “Never Ending Hill” off the group’s latest album, “Give Me Your Soul … Please”.

“Give Me Your Soul … Please” entered the Swedish national chart at position No. 28. The CD also landed at No. 58 on the Danish chart (the second highest new entry on the chart behind VELVET REVOLVER).

“Give Me Your Soul … Please” sold 4,500 copies in the United States in its first week of release to debut at position No. 174 on The Billboard 200 chart.