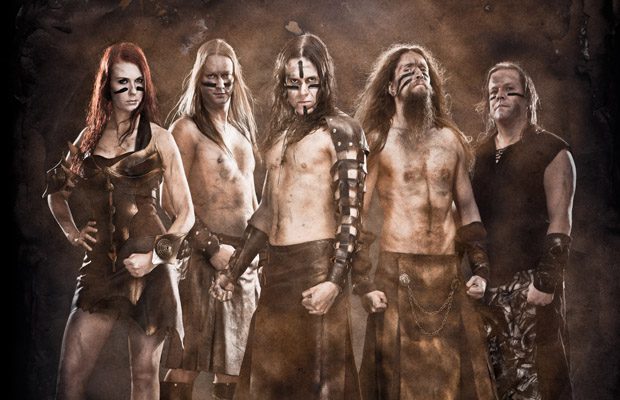 Keyboardist Emmi Silvennoinen of Finnish folk metallers ENSIFERUM will be forced to sit out the band’s South American tour — which is scheduled to kick off on May 28 in Bogota, Colombia — due to personal reasons. The group states: “The shows will go ahead as planned and the band will perform with Emmi‘s parts as backing tracks, so you needn’t worry about the shows missing the signature ENSIFERUM melodies!

“We’d like to assure you that everything is fine within the band — Emmi is healthy and this is just for this tour because of circumstances beyond her control. She will be performing at future ENSIFERUM shows.

“We hope to see as many of you as possible at the shows and look forward to playing in South America for the first time!”

ENSIFERUM recently forged a deal with Metal Blade Records. The band signed the agreement with Metal Blade CEO Brian Slagel during thePaganfest USA tour, and all parties are enthusiastic about new music and new possibilities.

Comments ENSIFERUM bassist/backing vocalist Sami Hinkka: “We are really looking forward to our co-operation with such a great and legendary label as Metal Blade. The next full-length album should be out in early 2015. We have already started working with the new songs and it’s obvious that the next album will be another step ahead for ENSIFERUM. And now that we have united forces with mighty Metal Blade nothing can stop us! The next album is going to be something that will rock the very foundations of folk metal genre.

“We also would like to thank Spinefarm Records for all these 13 years, it’s been as blast but now it is time for us to move on and head bravely towards new challenges.

ENSIFERUM will be touring throughout Europe and South America this summer as they continue their live campaign in support of their most recent album, “Unsung Heroes”.

“Unsung Heroes” was released on August 27, 2012 via Spinefarm. The CD was produced by Hiili Hiilesmaa (HIM, SENTENCED) at Petraxstudio (CHILDREN OF BODOM, NIGHTWISH) in Hollola, Finland and other locations in the Hämeenlinna area.