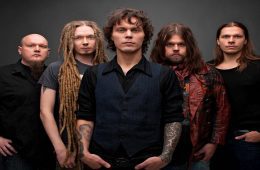 HIM Announce Breakup And Final Tour 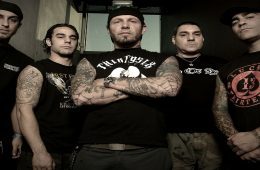 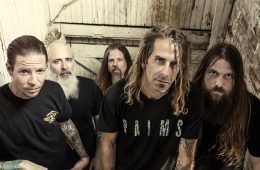 Manos SpanosJanuary 26, 2014
MOTÖRHEAD has been forced to cancel its previously announced European tour, originally rescheduled from last fall. "It is with great regret that MOTÖRHEAD has to announce the cancellation of their European tour, scheduled to start February, 2014," reads a statement from the band. "Many concerted, diligent and focused efforts were made by founding member, and international icon Lemmy Kilmister to deal with a range of health issues relating to diabetes. While there has been undoubted progress, Lemmy and the band were advised by doctors that it was still too soon to resume full touring activities, and so for the good of the future, the band and Lemmy reluctantly agreed to cancel. "No one is hurting more over this than Lemmy, and he feels the aggravation and inconvenience of every ticket, and every method of transportation, already paid for by loyal fans in anticipation of the tour. Being a road warrior of over 50 dedicated, non-stop years, it is equally distressing for him to be unable to occupy the top lounge of the trusty tour bus (his spiritual home) but Lemmy recognizes that his long-term health must win. It goes without saying that Lemmy profusely apologises for inconveniences caused, but he does want everyone to know that he is continuing on the road to a full recovery, and that the prognosis long term is very good." Since being diagnosed with diabetes in 2000, Lemmy's had to have a defibrillator installed in his heart, and more recently suffered from an "unspecified hematoma," which led to the cancellation of several European shows last summer. Factor in a daily intake of smokes, speed and Jack and Coke for the last 40-plus years, and it's a wonder he's alive at all. After decades of invincibility, the cracks are finally showing. Lemmy has had to make some difficult adjustments. "I had to give up the Jack and Coke because of the sugar," he told Decibel magazine. "I miss it. I gave up smoking, too. I gave up bread. It's been a bit of a job, you know?" Longtime MOTÖRHEAD manager Todd Singerman told Decibel: "[Lemmy's] been up and down. He's got a really bad diabetic problem, and it changes on a daily basis. A lot of it is just fighting the bad habits, the things that he's not supposed to do anymore. He's stopped smoking, but he probably sneaks Jack and Coke here and there. He'd be lying to you if he said he stopped. He's been trying to substitute it with wine, and I'm sure he's slowed down on the speed. He thinks wine's better than Jack, but it's still got tons of sugar, you know? He doesn't grasp that he's just trading one demon for the other. That was the compromise with the doctors, by the way — trade the Jack for the wine. But he doesn't tell them he's drinking two fucking bottles, either. These are the battles we're up against. Keep in mind, he's been doing all this stuff on a daily basis since Hendrix. And it's coming to roost. It's sad for him, because he's gotten away with this stuff for all this time. "I made them cancel [last fall's European tour], because Lemmy's not ready," Singerman explained. "He didn't wanna cancel. But what was gonna go down is what happened in Europe over the summer. See, he fucked up in Europe. He was supposed to rest for three months, and he refused. He ended up doing that show [Wacken Open Air in August], which he wasn't supposed to do, and it ended up being 105 degrees "Out there. He's playing direct in the fucking sun. The only thing I'm proud of him for is stopping when it didn't feel good. That was smart of him. The bottom line is that he needs to find a balance and then live that balance for a few months. But we can't find the balance yet. He has great days and then he fucks it up. And when you fuck up, you go backwards." Lemmy, who turned 68 years old in December, told Classic Rock he didn't expect to still be here at 30, "I don't do regrets," he said. "Regrets are pointless. It's too late for regrets. You've already done it, haven't you? You've lived your life. No point wishing you could change it.
04 min read

Manos SpanosSeptember 25, 2013
Following the success of Gigantour 2013 and sold-out shows with IRON MAIDEN and BLACK SABBATH, MEGADETH has confirmed the "Super Collider" tour. The cross-country trek kicks off in St. Paul, Minnesota on November 23 and makes stops in Detroit, Boston and Charlotte, along with other markets. Support on the tour will come from FEAR FACTORY and NONPOINT. MEGADETH has partnered with On The List Presents to offer a variety of VIP packages, including meet-and-greets and exclusive MEGADETH guitar packages. More information is available at Megadeth.com. The dates are as follows: Nov. 23 - St. Paul, MN - Myth Live Nov. 24 - Madison, WI - Orpheum Theatre Nov. 26 - Grand Rapids, MI - Orbit Room Nov. 27 - Detroit, MI - The Fillmore Nov. 29 - Montclair, NJ - The Wellmont Theatre Nov. 30 - Bethlehem, PA - Sands Bethlehem Event Center Dec. 01 - Boston, MA - House of Blues Boston Dec. 03 - Huntington, NY - The Paramount Dec. 04 - Silver Spring, MD - The Fillmore Silver Spring Dec. 05 - Charlotte, NC - The Fillmore Charlotte Dec. 07 - N. Myrtle Beach, SC - House of Blues Myrtle Beach Dec. 08 - Saint Petersburg, FL - Jannus Live Dec. 09 - Lake Buena Vista, FL - House of Blues Orlando Dec. 12 - Houston, TX - Bayou Music Center Dec. 14 - Socorro, TX - Socorro Entertainment Center MEGADETH's latest album, "Super Collider", has sold 67,000 copies in the United States since its June 4 release. The CD arrived in stores via MEGADETH mainman Dave Mustaine's new label, Tradecraft, distributed by Universal Music Enterprises (UMe). It marks MEGADETH's first release since the band's split with Roadrunner Records. In a recent interview with Metal Insider, MEGADETH bassist David Ellefson stated about the band's decision to release the new album via the group's own label, "The whole imprint idea is that we pretty much just put our logo on our own record [laughs], but we use the muscle of Universal Music Group around the world to push it out and to use all of their marketing and distribution, which is what you want.
03 min read 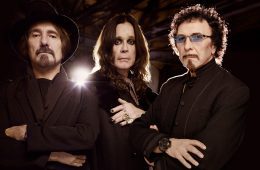 Manos SpanosJuly 26, 2013
BLACK SABBATH kicked off its 20-date North American tour last night (Thursday, July 25) at the Cynthia Woods Mitchell Pavilion in The Woodlands (a suburb of Houston), Texas. The band's setlist was as follows: 01. War Pigs 02. Into The Void 03. Under The Sun 04. Snowblind 05. Age Of Reason 06. Black Sabbath 07. Behind The Wall Of Sleep 08. N.I.B. 09. End Of The Beginning 10. Fairies Wear Boots 11. Methademic 12. Rat Salad/Drum Solo 13. Iron Man 14. God Is Dead? 15. Dirty Women 16. Children Of The Grave 17. Paranoid Fan-filmed video footage of the concert can be seen below. After 35 years, three original members of BLACK SABBATH released a new disc on June 11 called "13". The first SABBATH record since 1978's"Never Say Die!" to feature singer Ozzy Osbourne, along with guitaristTony Iommi and bassist Geezer Butler, it's their second attempt at new music together after a previous effort failed in 2001. The new disc does not feature founding drummer Bill Ward, who has sat out the reunion over contractual issues.
02 min read 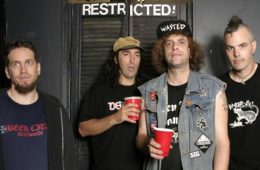 Manos SpanosJuly 10, 2013
Spike Cassidy (guitar) of hardcore/metal crossover pioneers D.R.I.(DIRTY ROTTEN IMBECILES) is reportedly suffering from tendinitis, forcing the cancelation of the band's previously announced European tour. A statement from D.R.I.'s European booking agency, M.A.D. Tourbooking, reads as follows: "We are really sorry that we have to tell you that another tour has been canceled. The guitar player of D.R.I. has huge problems with his finger, he can't bend it anymore, so he's unable to play guitar. Seems like it's from an injury moth ago. We wish him all the best and hope that he gets well soon!" Cassidy underwent emergency surgery in September 2012 for a severe blockage caused by the reversal surgery he had just three weeks earlier.
02 min read

Manos SpanosJuly 5, 2013
The first in a series of new tour-diary videos from British heavy metal legends IRON MAIDEN can be seen below. IRON MAIDEN singer Bruce Dickinson recently told the Swedish web siteTalarforum (Speakers' Forum) that there are plans for the band to enter the studio to record a new album for a tentative 2014 release. MAIDEN's 15th studio CD, 2010's "The Final Frontier", featured 10 tracks that had an average running time of seven minutes and 40 seconds, with the shortest song, "The Alchemist", clocking in at four minutes and 29 seconds, and the longest, "When The Wild Wind Blows", lasting ten minutes and 59 seconds.
01 min read 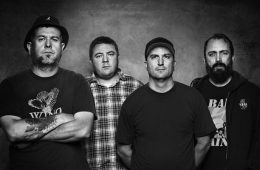 Clutch announced Cancellations and Reschedules in the current European tour

Manos SpanosJune 21, 2013
Unpleasant news has just been announced through Clutch's official facebook page just a few hours ago. Due to an unexpected family emergency they have to cancel or reschedule some dates in their current European tour schedule. Read the announcement below: "Due to an unexpected family emergency Clutch have made changes to their current European tour schedule. The dates from June 20th thru July 2nd have either been cancelled or rescheduled. All dates originally scheduled from July 4th in Sweden thru July 11th in the UK are unaffected and are still confirmed and scheduled as planned. A complete listing of cancellations and the rescheduled dates as well as a new, updated and confirmed itinerary is as follows: CANCELLATIONS/ RESCHEDULED DATES:
01 min read 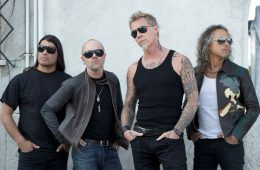