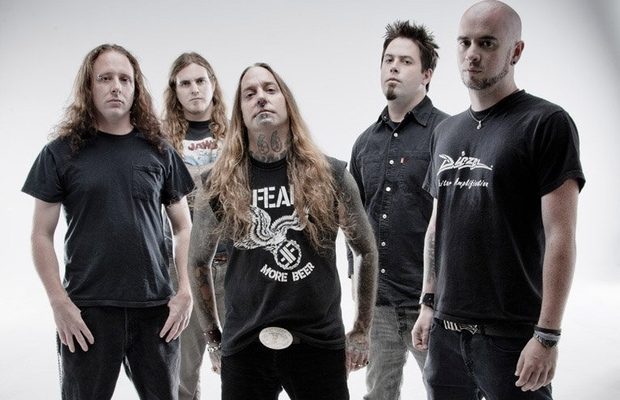 Californian metallers DEVILDRIVER have set “Winter Kills” as the title of their sixth album, due on August 27 via Napalm Records. The instrumental parts for the CD were recorded at Audiohammer Studios in Sanford, Florida while the vocals were laid down at singer Dez Fafara‘s home studio, with Mark Lewis (THE BLACK DAHLIA MURDER,WHITECHAPEL, ALL THAT REMAINS) handling production duties. The album’s cover artwork features a photograph by Dean Karr. The layout was done by Ryan Clark of Invisible Creature.

Comments Fafara: “This is by far DEVILDRIVER‘s most cohesive, powerful, groove-laden record to date! We delivered our signature California groove sound alongside a raw and biting guitar tone, mixed it with massive hooks, added in thunderous drums to rethink, and reshape another different sounding unique piece of rock and roll!

“Cutting our own path is something to be proud of.

“DEVILDRIVER has always and will forever be about thinking outside the box and delivering on something different from record to record. We cannot be assimilated into any scene or even genre of metal, and we will continue to do things our own way with a massive middle finger in the air to the status quo!”

In an interview with Loudwire, Fafara stated about the music direction of the band’s next CD, “Every record is different. That being said, I thought‘Pray For Villains’ was kind of an out-of-the-box record for us. I thought‘Beast’ was a weird out-of-the-box record for us. We’ve kind honed back in to where we are. This new record sounds a lot like the first three records. It’s got an intense groove to it, and I’m really happy. The writing is going extremely well. That being said, I think we’ve laid back on our laurels right now and be like, ‘We’re a groove band.’ The fans started calling us ‘the groove machine, The California groove machine.’ Everybody needs a title; we’ll take that one and we’re going to give them that on the new record, for sure.”

DEVILDRIVER‘s fifth album, “Beast”, sold a little over 11,000 copies in the United States in its first week of release to debut at position No. 42 on The Billboard 200 chart.