THE BLACK DAHLIA MURDER: Another New Song Available For Streaming 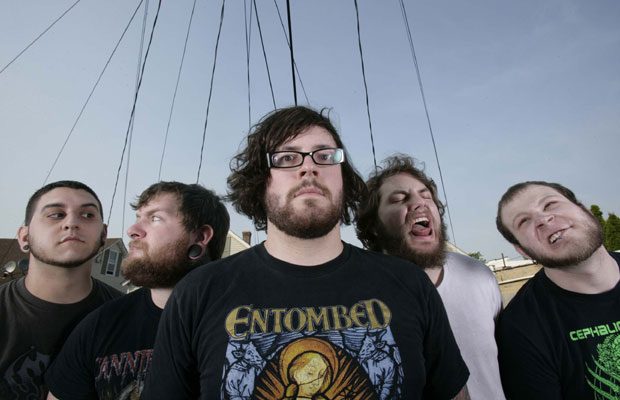 “Goat Of Departure”, a brand new song from Michigan’s unstoppable sons of molten melodic death metal THE BLACK DAHLIA MURDER, can be streamed using the SoundCloud widget below. The track comes off the band’s sixth full-length album, “Everblack”, which will be released on June 11 via Metal Blade Records. The CD was recorded at Audiohammer Studios (lead guitars and vocals), Rustbelt Studios (drums), and Regal Fecal (guitar and bass). Mixing was handled by Jason Suecof and Ryan Williams, mastering was completed by Alan Douches at West West Side Music (SEPULTURA, SUFFOCATION, UNEARTH) in New Windsor, New York. Frontman Trevor Strnad‘s horror-inspired lyrics persist on“Everblack”, beginning with “In Hell Is Where She Waits For Me”, a reference to the murder from which the band took for its moniker. The cover artwork was painted by renowned artist Nick Keller.

Strnad elaborates on the lyrical concepts: “The opening track is the first actual song we’ve done about the Black Dahlia. This one is for the fans… they’ve been asking for this to happen for a long time. The story takes place at the Elizabeth Short‘s rain drenched funeral, where her killer in attendance… just one of the many macabre tales woven into the fabric of‘Everblack’. Subterranean flesh-farming vampires, vine rape, Jeffery Dahmer, amputation… it’s all here! With this sixth slab of sickness I tried my best to honor the band’s legacy and write lyrics that will keep the legions of horror fiends perspiring with fear.”

Available at MetalBlade.com/bdm are a variety of limited edition pre-order bundles. Fans can grab “Everblack” on a triple gatefold double LP with purple/white marbled vinyl, along with “crime scene bundles.” An evidence pack, which includes toe tags, deceased band member photos, spent shotgun shells, and more can be viewed now. These bundles are extremely limited and expected to sell out quickly.

In a recent interview with Kaaos TV, Strnad stated about “Everblack”: “The writing was still taken care of Ryan [Knight] and Brian [Eschbach] — the guitar players. It was split pretty much 50/50 — pretty much like‘Ritual’ [2011] was; half the songs by Ryan, half the songs by Brian. I think what Max [Lavelle, bass] brought to this record is a really, really crushing bass sound that’s a little bit new for us, like a little bit more overdriven and distorted and it’s really energetic and heavy as fuck. AndMax killed it in the studio; he did great. [New drummer] Alan [Cassidy] also did great. He didn’t really have as much time to study the songs, because he came into the band so quickly, you know what I mean?! We needed him to come on tour with us to take Shannon‘s [Lucas] place, and things worked out so great with him that we asked him to stay. But he had to learn the songs for the album really fast. He was at home in Wyoming playing drums for 10 hours a day, he said, getting prepared for the album. He brought a lot to the drums; he’s a got a really awesome style, I think his fills are bit more busy than Shannon‘s. I think that there’s gonna be some stuff that makes him really stand out and will get people excited about him. ‘Cause I know right now people are, like, ‘Wow, they suffered a huge loss, losing Shannon.’ Shannon is a great drummer, definitely, but he’s gonna like what Alan has done on this record, too; it’s really impressive stuff and I definitely feel like we found the right guy for the band. So his playing is exciting and people are gonna take notice, for sure, as soon as that record drops. And I’m excited to get it out for that reason, you know — to kind of say to everyone, ‘We’re back.’ [laughs]”

Regarding whether drummer Alan Cassidy is now a full-fledged member ofTHE BLACK DAHLIA MURDER, Strnad said: “It’s very, very recently we asked him to join [the band as a member] — even after the album [was completed]. But he’s a great dude, great positive energy. He’s young, man — 23 years old — and he’s a monster at the kit. So it’s a good relationship, it’s been a lot of fun, he’s very positive and a really hard worker, and we’ve never had to ask him to do anything twice. He couldn’t have played on the album, he couldn’t have come on the tour if he wouldn’t have been a psychopath workhose, but he really was — he really worked really hard and exceeded our expectations and now he’s here with us and we’re definitely proud to have him.”

On the topic of how “Everblack” compares to “Ritual”, Strnad said: “I think that it kind of took what we learned with ‘Ritual’ and pushed it even further, I think. The biggest change for me, writing ‘Ritual’, was having more surprises in the songs and more dynamics — buildups, some quiet parts, samples, different kinds of instruments incorporated into the album. That has all carried over to this new one. And better solos, more solos, more time to solo. Ryan‘s guitar work on this album is mindblowing. He shocks us, pretty much, every time we come back to do an album with what he’s learned and he really sets the bar high for himself. So there’s definitely some fretboard fireworks on this one. I don’t know, man. People that liked ‘Ritual’, I think they’re gonna love the new one; it’s just us taking it further — darker music, more melody…. The melody that was really prevalent in ‘Ritual’ is there. But there’s also some heavy stuff, too — some slow, MORBID ANGEL-esque kind of slimy stuff. So I think people are gonna be really happy with it… [It’s[ a good mixture of all thingsDAHLIA. We [wanted to] keep it kind of raw with the mix — not too polished. Keep things sounding ‘real’ — like ‘Ritual’ was; I think that was a good move.”