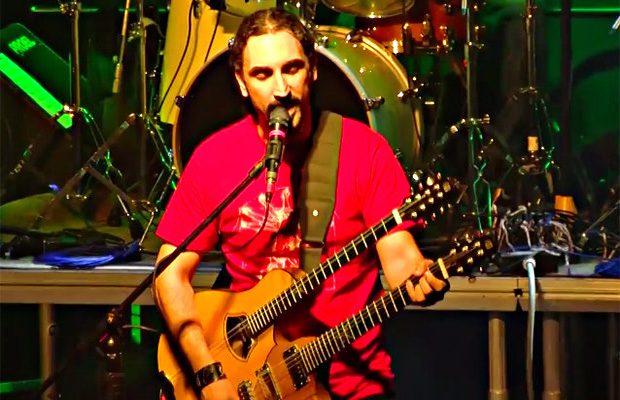 In a statement, he said: “I never thought that someday I’ll write these words… yet if there’s something stronger than our past — it is our future, and our dreams, as we evolve and understand what is right for us in the path ahead.

“You know I always strive to be creative, innovative, compose the next authentic thing, and devoted my life to fuse and mix together the East and West, acoustic with electric, rock with folk traditional music, all with authenticity and full heart.

“Books could be written from the what I’ve done for and gone through since founding ORPHANED LAND (initially named RESURRECTION in 1991), from every fan mail in the early ’90s, through signing the first deal with Holy Records, endorsements, budgeting, website development, pledging… the list goes on and on. Above all, I’m proud most of my vast compositions, arrangements, production and musical boundaries explored.

“ORPHANED LAND has been a dream turned into reality with tremendous hard work and accomplishments. It is my life’s work, spanning over more than 22 years as a founding member, composer, producer and many other roles. But mainly being ‘the heart’ I always believed ORPHANED LAND should reflect through.

“I feel that now, from all the right reasons that I can and cannot change, the time has come for new dreams.

“The first dream is on its way already. The new album I’m working on these days will be called ‘Desert Butterflies’, a conceptual piece, rich and diverse, continued to my debut solo release, ‘Melting Clocks’, and the ‘oriental rock’ genre I’ve been pioneering and redefining. It includes musical collaborations with Ron ‘Bumblefoot’ Thal (GUNS N’ ROSES), Marty Friedman (MEGADETH), Mariangela Demurtas (TRISTANIA) and more. it’ll be worth the wait.

“I’m not closing the door, not on ORPHANED LAND members, and certainly not on YOU, my beloved and loyal fans, friends and followers.

“The best is yet to come… I guarantee it to you, personally.”

ORPHANED LAND‘s sixth full-length album, “All Is One”, was released in North America on June 25, 2013 (one day earlier internationally) via Century Media Records. The cover artwork for the follow-up to 2010’s “The Never Ending Way Of ORwarriOR” was created by the French artist Metastazis (PARADISE LOST, AS I LAY DYING, SONNE ADAM, WATAIN) by perfectly incorporating the three biggest religious symbols into one piece of art.

The limited-edition version of “All Is One” contains a very special bonus DVD with some very exclusive music clips and an interesting documentary about the genesis and recording of the album.

ORPHANED LAND‘s new effort was the band’s first to feature guitarist Chen Balbus following the departure of Matty Svatizky in June 2012 due to “personal” and “professional” issues.

“All Is One” was mixed by Jens Bogren (JAMES LABRIE, DEVIN TOWNSEND PROJECT, OPETH) and was recorded in three different countries: Israel, Turkey and Sweden. Ironically, these countries are Jewish, Muslim and Christian, respectively, which strengthens the ORPHANED LAND message of unity through music. Over 40 musicians were used to flesh out the sound of “All Is One”, including 25 choir singers and eight classical violin, viola and cello players from Turkey.

ORPHANED LAND‘s concert DVD, “The Road To OR-Shalem”, was released in October 2011 in Europe and November 2011 in the U.S. via Century Media Records.
Read more at http://www.blabbermouth.net/news/orphaned-lands-founding-guitarist-and-main-composer-yossi-sassi-quits-band/#rtXuRlKeqAuPh58a.99