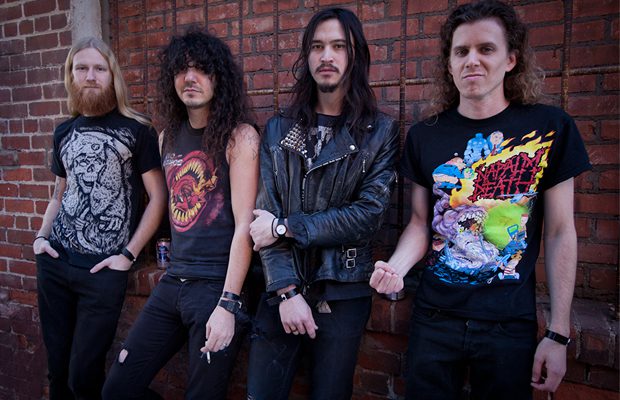 David DiSanto, vocalist and guitarist for progressive thrash band VEKTOR, was reportedly arrested yesterday at the Scion Rock Fest in Memphis, Tennessee. According to MUNICIPAL WASTE, which also performed at the event, DiSanto “got locked up for throwing a beer on a Christian protester.”

A couple of photos of DiSanto being led away in handcuffs can be seen below.

The other members of VEKTOR have since released the following statement regarding the matter:

“Alright alright alright. As many of you know, it was an intriguing evening in Memphis after the show itself (which did rule, thanks to you all, by the way).

“We’d like to clarify a bit, though. The blurb going around is sounding a bit misleading.

“1. ‘Threw a beer’ does not mean ‘chucked a glass bottle,’ or even a can/cup. (allegedly) beer was splashed out of a plastic cup, no violence.

“2. He’s not locked away or anything, only a misdemeanor…

“We are getting a well-needed chuckle from all the FREE DAVE/FREE VEKTOR stuff, though.

“Even though you guys have put a somewhat positive spin on it, it was a stressful ordeal for everyone involved last night, and all before an early morning flight. He is safe and sound, though.

“We are still missing details, as none of the three of us actually saw what happened and haven’t been able to communicate with him whatsoever since.

“Thanks for your amusing support.

“Nothing remotely like this has ever happened to him (or us), so we’re kind of dizzy.

“Pretty absurd, but not the end of the world or anything.

“We probably shouldn’t say much more yet, and we have yet to see if or how this will affect things. It is unfortunate, but what’s done is done and hopefully the consequences are as mild as the (alleged) act.”

Originally released on Heavy Artillery Records in 2011, VEKTOR‘s latest album, “Outer Isolation”, is now available on CD again with new artwork, as well as on limited-edition colored vinyl for the first time.