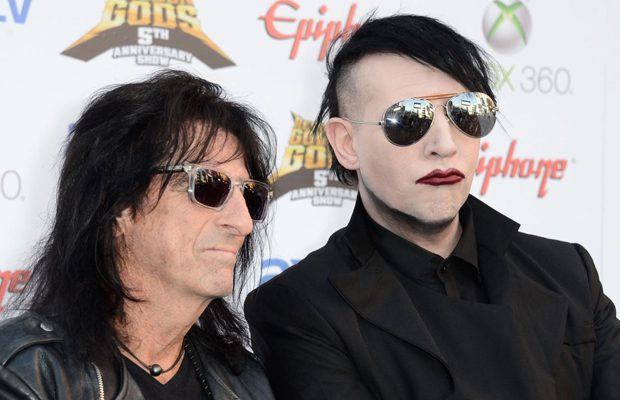 Marilyn Manson joined Alice Cooper on stage last night (Saturday, June 1) at the Isleta Amphitheater in Albuquerque, New Mexico at the opening show of their co-headlining “Masters Of Madness” tour to perform the Cooper classic “I’m Eighteen”. Video footage of Manson‘s appearance can be seen below.

In what is obviously a “dream” pairing, or some might say a “nightmare,” Cooper and Manson have teamed up for “Masters Of Madness” through June 28. Following recent pairings of Alice with Rob Zombie and then Rob Zombie with Manson, this combination of Alice Cooper and Marilyn Manson has been long awaited by fans of both artists.

Alice Cooper is a true rock icon, having pioneered the use of theatrics and shocking images onstage in concerts from the earliest days of the original band of the same name. Since going solo, he has continued to produce elaborate stage shows providing fans with both shock and rock of the highest caliber. Inducted into the Rock And Roll Hall Of Fame in 2011, Alice has toured and recorded continuously, with his most recent album being “Welcome 2 My Nightmare” through UMe. Recorded with longtime collaborator Bob Ezrin, who produced the original ground breaking, multi-platinum “Welcome To My Nightmare” album in 1975, the album picks up right where they left off, with Alice trapped in his own warped mind.

Marilyn Manson‘s most recent full-length album, “Born Villain”, his eighth overall, debuted in the Top 10 on The Billboard 200 chart. The CD earned Manson his fourth Grammy nomination at the 2013 Grammys in the Best Hard Rock/Metal Performance” category for the album’s lead single, “No Reflection”.

The tumultuous relationship Marilyn Manson has cultivated with the public through his genre-defying music and anti-status quo message of thinking for oneself has resulted in sold-out tours, protests, legal battles, adoration, hate, more than 50 million records sales, award-winning distilled spirits, several Grammy nominations and, most importantly, a long list of some of the most enduring and powerful singles ever.

Manson‘s last U.S. tour was the “Twins Of Evil” run with Rob Zombie, a bill that looked good on paper but which did not go smoothly, leading to some verbal exchanges between the two shock rockers onstage.

Both Zombie and Manson have acknowledged the legendary Cooper as an influence on their own careers.