JASON BONHAM: ‘My Dream Is To Do The Hologram Drum Solo With Dad Next To Me’ 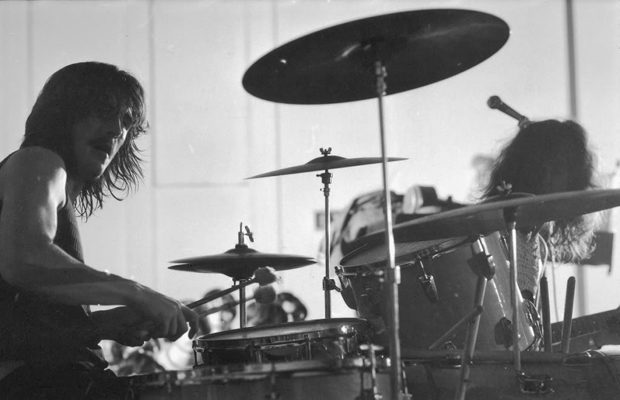 Legendary Rock Interviews: You’ve said before that your current touring band, JASON BONHAM’S LED ZEPPELIN EXPERIENCE, was in part inspired by the LED ZEPPELIN show at O2 Arena. How so?

Jason: It was, but there was also a considerable amount of time between when the actual concert took place in ’07 and when the “Celebration Day” CD/DVD was released late last year where I gave it lot of thought. I really started considering it but I was of two minds. At first, I thought I would really just leave playing those songs with those guys at that and I was really worried about what people would think — not critics, but fans in general. I gave it a tremendous amount of thought, and it was a couple of years before I actually took it out on the road and it was well-received. Then, when the actual O2 concert was finally released, I would have never imagined that I would still be playing the material and doing the shows, but it’s still doing well. I think the DVD of “Celebration Day”helped, though, people seeing me performing with John Paul [Jones],Jimmy [Page] and Robert [Plant]. It’s definitely helped with people coming out to the shows. I think if you were a non-believer before, I feel confident that my performance on that show was me giving my best at that time. I think that my performances with LED ZEPPELIN got better with each performance and I think that our performances as LED ZEPPELIN EXPERIENCE have also gotten better with each show. The more relaxed we play, the better it sounds.

Legendary Rock Interviews: There is a lot going on visually during these shows. I don’t wanna give it all away, but how much fun is it for you to work with the show elements of the LED ZEPPELIN EXPERIENCE tour?

Jason: It’s been fun, and it’s important to me to have something in addition to the music; that was the whole point of it. When I first started doing this, I was working with some of the people behind some of the biggest tribute tours like THE PINK FLOYD EXPERIENCE, THE BEATLESand now I’m doing it. It’s imperative that I continue putting together the best shows and take it to the next level. I’m talking to people about holograms, and my dream is to do the hologram drum solo with dad next to me.

Jason: [laughs] Yeah, so…. That is my goal, my dream and we’re just trying to figure out everything that we can do with this show. There’s so much more that I would love to do, but obviously, I am limited somewhat as far as the footage that I have and the quality of the footage. These guys were operating in the 1970s, and it’s not at all like it is today where everybody can record everything with a phone or digital camera. Back in those days, if you had a camera that could record video, you were well off, and to be able to be proficient enough to edit or work with it or process it and release it was a whole other matter. It wasn’t as instant of a thing as it is now. [laughs] I am trying to work with the limited footage I have, to put it together in a way that works and is purposeful. I did not want to go onstage and play LED ZEPPELIN songs; there has to be more than that. I wanted to create a complete experience of what LED ZEPPELIN means to me, growing up around them and being part of it all my life. Believe me, it can also be a hindrance but it has mostly been a pleasure, and if anything, playing their music and performing this show has simply been a pleasure. It’s definitely less stressful for me, because I am way less critical of this music, obviously, than I am when writing or recording new material for myself of my band. I am notoriously hard on myself in terms of working on new material and while I am critical of my performance on the LED ZEPPELIN material, I am way more critical of my own stuff. I’m pretty hard on myself.

Legendary Rock Interviews: I think you got some of the best advice in general from Robert Plant when he told you if you’re going to do it you need to do it with a big smile on your face.

Jason: Yeah, and just his advice to enjoy playing in general. Even moments before we went onstage at O2, he was telling me, “Remember to enjoy it, Jason, because it will be over before you know it, and no one can ever take that away from you.” Sometimes when you play these gigs, shows you’ve been looking forward to all of your life, you can get caught up in the moment or caught up in the playing and forget to enjoy it. [laughs] It was around my third song in (at the O2 ZEPPELIN show) where I really started to relax and take it all in and it was amazing. It still is. Who wouldn’t enjoy playing this music? I’m very lucky, I’m working with some truly great musicians who are passionate about LED ZEPPELIN, as I am and it’s fun.