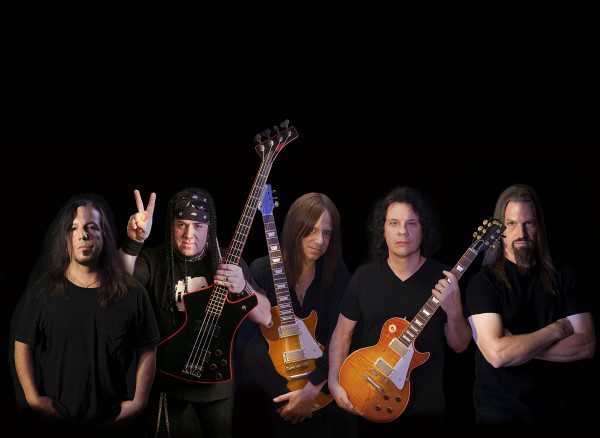 Long-running U.S. metallers RIOT will release an as-yet-untitled new album in 2014 via SPV/Steamhammer (in North America and Europe) and Avalon/Marquee (Asia). The band will enter the studio in December to begin recording its first studio CD without guitarist and founding member Mark Reale, who died in January 2012 in a San Antonio hospital due to complications of Crohn’s disease — an ailment he had battled for most of his life. He was 56 years old.

Although no decision has yet been made in the matter, RIOT bassist Donnie Van Stavern has revealed that the group’s new album may be issued under a different band name — presumably in recognition of the fact that Reale was RIOT‘s only remaining original member prior to his passing.

“Thank you, fans, for your support!

“Thank you, Mark. This is for you and dedicated to you! Shine on, metal warrior!”

Reale spent most of his life working and performing while enduring almost constant pain and the side effects of treatment for Crohn’s disease. He was in Texas bravely attempting to practice for the shows, but was felled by a severe onset of Crohn’s symptoms, leaving him in the Intensive Care Unit at an undisclosed facility. Mark was struggling with these symptoms throughout the production of RIOT‘s last album, “Immortal Soul”, and guitarist Mike Flyntz recorded a major portion of the guitars on the LP with Mark‘s creative direction while Reale was unable to perform.

In a September 2012 online posting, the surviving members of RIOT rejected claims that they were trying to cash in on Reale‘s death, writing, “RIOT has never really made lots of money — not even Mark. He lived with his parents until the day he passed. And we all have day jobs.

“Mark was our brother. He lived with us and we took care of him up until his passing, and we are still deeply saddened by the death of a family member.”

They went on to say that Reale was “too shaky” to play anything but four rhythm tracks on the “Immortal Soul” album, leaving Flyntz to complete the work. “It did frustrate him,” they added. Nevertheless, “Mark was at the studio, and was pleased with how it was coming out — and was proud to call it a RIOT record.

“Mark and his estate’s wishes were for us to go on, and most people want us to. We play songs we wrote or co-wrote, and play a few of Mark‘s songs in tribute to him and the early years… We’re all fans of the early stuff.”

“There are bands out there playing songs and performing with ONE original guy in the band and some didn’t write any of the music — QUIET RIOT, GUNS N’ ROSES, GREAT WHITE now QUEENSRŸCHE! And, of course, THIN LIZZY (well, a couple of guys, but NOT Phil [Lynott]) but people come out to hear songs they love.

“Mike Flyntz has been taking care of Mr. Reale [Mark‘s father] since Mark‘s death because [Mike] is like a son to him now.”