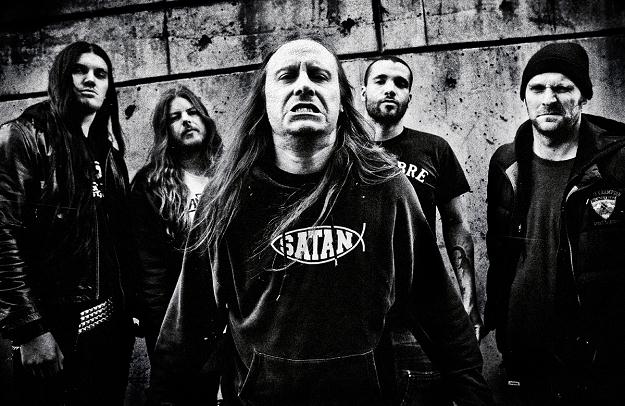 Swedish metal veterans ENTOMBED have inked a deal with Century Media Records. The band’s tenth album, “Back To The Front“, will be released on October 29 (one day earlier internationally). The CD was recorded at Studio Bohus (ABBA, EUROPE) in Kungälv, Sweden with producer Roberto Laghi (IN FLAMES, HARDCORE SUPERSTAR). The cover artwork was painted by Zbigniew Bielak (WATAIN, VADER) and can be seen below.

A press release states: “Don’t be afraid that it will sound like ABBA — it’s 666% true to the ENTOMBED everybody loves. While not falling for total regression back to the early classics ‘Left Hand Path‘ or ‘Clandestine‘, expect a total bone-crushing opus that will have fans of ‘Wolverine Blues‘, ‘To Ride…‘ or ‘Morning Star‘ cry tears of joy. From the morbid, pissed-off lyrics over detuned, massive riffs to the inimitable brick-heavy groove and L.G. Petrov‘s titanic roar, ‘Back To The Front‘ has it all, so get ready for a stone-cold stunner!”

Comments singer L.G. Petrov: “After almost seven years of studio absence, we are back with a new album called ‘Back To The Front‘ ready to blow metalheads away around this world! Feels great to announce this deal with Century Media! Can’t wait to let you all be a part of it!”

Adds Jens Prüter, head Of A&R at Century Media Records Europe: “I first saw ENTOMBED in 1992 on the Gods Of Grind tour and was blown away by their merciless sound that was even back then more than just death metal. Over 20 years later, they still kick ass and we are more than proud to finally welcome them to the Century Media family.”

ENTOMBED recently teamed up with PledgeMusic to launch a reissue campaign for some of their albums.

In early 2012, Threeman Recordings, which is owned and run by members of ENTOMBED, launched a collaboration with Ninetone Records. The first release under this arrangement was a single for the re-recorded version of the song “Amok” from ENTOMBED’s 2007 album, “Serpent Saints – The Ten Amendments“, produced by Patrik Frisk (CORRODED).