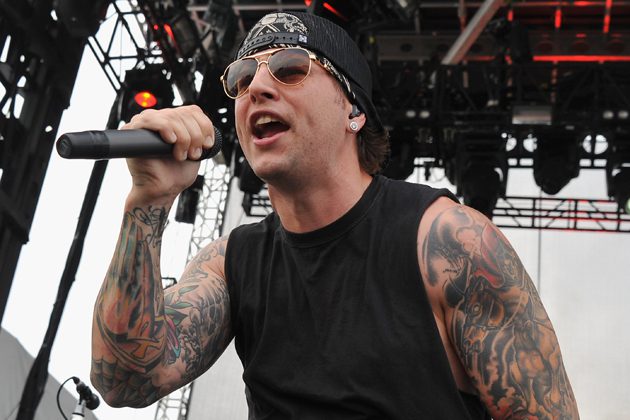 AVENGED SEVENFOLD singer M. Shadows claims that he isn’t bothered by MACHINE HEAD frontman Robb Flynn‘s criticism of AVENGED SEVENFOLD‘s new album, telling a radio station in Canada that “everyone should be entitled to say whatever they want.”

In a lengthy critique of “Hail To The King” at MACHINE HEAD‘s Facebook page, Flynn wrote that the new AVENGED disc is a “blatant jackery” of material from other acts.

Flynn didn’t pull any punches, writing, “Congratulations to AVENGED SEVENFOLD on their latest ‘covers album’ coming in at #1. Who knew that re-recording METALLICA, GUNS N’ ROSES, and MEGADETH songs could be such a worldwide hit!!?? Ba-dap Psssssss!!”

It was back to METALLICA for Number Three, as Flynn wrote, “‘Black album‘ sales skyrocket as fans realize where new songs came from.”

Flynn maintained that he was just having some fun with AVENGED in his critique, saying he was “happy” for the band’s success and adding, “While I like the new record, and really dug the last record ‘Nightmare’ . . . It’s time to poke a little fun at A7X.”

Speaking to Amy Volume of Ottawa, Ontario, Canada’s 106.9 The Bear radio station on Wednesday (September 11), Shadows was asked for his response to Flynn‘s takedown. “Actually, [FOZZY singer and WWE wrestling superstar] Chris Jericho sent it to me [Tuesday] morning,” Shadows said (hear audio below). “He’s, like, ‘Dude, look at this B.S.’ [He was] going crazy. And I was, like, ‘Ah, Chris, I love you.’

“I have met Robb on numerous occasions and he’s always been cool to me. And I just read it as a joke.

“I really don’t know what to say about it other than I agree with him on the [METALLICA] ‘Sad But True‘ thing — that was obviously an inspiration for that song. Everything else, I kind of think he… If it is a joke, it was kind of overboard, ’cause it doesn’t make sense in my mind. But at the same time, he was saying it was a joke, so…

“I have no ill will towards those guys. I’ve met [MACHINE HEAD guitarist] Phil [Demmel] a couple of times; he’s cool. Robb is cool. And I think the guys has the right to go make… if it’s really a joke, in his mind… Some people might see it as being as an underhanded… joke. But, to me, if he just wants to go in there and write whatever he wants, I think that’s totally cool. Everyone has an opinion and everyone should be entitled to say whatever they want. So it’s no skin off our backs.”

Asked if the bands that Flynn mentioned in his critique were influences on AVENGED SEVENFOLD, Shadows replied: “I think all the bands he said we were very inspired by. I think also [BLACK] SABBATH, [LED] ZEPPELIN, THE ROLLING STONES.”

He continued: “I think when you take a record like this and the way metal has become very blast-beat, screamy-oriented, when you kind of take things back and go to a more classic-rock feel, you’re gonna feel the similarities to what we were trying to do; we were trying to make an AVENGED SEVENFOLD album from the early ’90s and late ’80s. It was just something that really intringued us and interested us. And so, for me, I think all those bands have always been an influence — you can hear that on ‘City Of Evil‘. And METALLICA has, obviously, influenced every single band that picked up a guiat and plays metal. So, yeah, all those bands, plus all the old greats.”

“Hail To The King” sold 159,000 copies in its first week of release, giving the California band their second straight chart-topper after 2010’s “Nightmare“.

Next up for AVENGED SEVENFOLD is its first major tour in support of the new CD, which starts October 3 in Chicago.