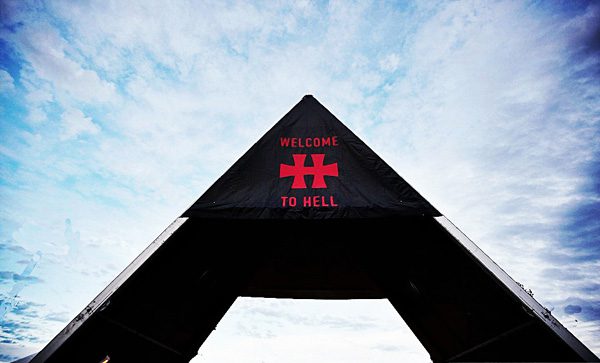 Second day of Hellfest and a killer day too! The schedule for this day was full. Unfortunately the huge line in the showers delayed us somewhat, so we missed a few of the bands we wanted to see. Finally we managed to be at the festival grounds by 13:00. How would all these bands fit in our program? Plus, we had arranged some interviews, so a visit to the Press Area was in order. This part of the grounds was a VIP area and a nice surprise for us. It had a bar of its own of course, a computer room, and an amazing “garden” full of iron skeleton sculptures. It was a really awesome place to just sit, relax a bi and recharge our batteries. And believe me, this day, with these killer bands, demanded it!

My first stop for the day was the Temple. Many had gathered already to listen to some nice death/doom by Necros Christos. Their performance was awesome and especially the vocals of Mors Dalos Ra were perfect. The sound of the guitars could be clearer, but that didn’t hold back neither the band, nor the crowd.

Chinese use to say that a picture can be described by a thousand words. Sometimes words cannot describe what exactly you have seen, what you have felt.. Since Death Angel had announced that was going to be a special show and they would play “The Ultra-Violence” because of the 25 year anniversary, the crowd was prepared for a battle. A battle without winners or losers but Thrash Fucking Metal!! The mentality which band imparted was amazing. Unstoppable moshpits and crowd-surfing by more than three-hundred people was nothing compared to the enthusiasm that crowd had. It was so sad that they didn’t have more than fifty minutes.

We pleaded them to play more, but in these kinds of festivals everything is predetermined and nothing can change the schedule. One of the “hot” moments was that for the first time Death Angel played the track “The Ultra-Violence”. One of the greatest performances at Hellfest for sure.

First band that I saw that day was Cancer Bats. They stepped into the stage and at the time me and Panos entered the place, they were playing “Sabotage”, a really cool song. I had never seen Cancer Bats before so I was wondering how it would be and it was great watching them on stage. They played also “Rats” from their new album and more like “Hail Destroyer”.

It was time for some rock and to give our ears and necks a small break. On “Mainstage 1” Uriah Heep warmed us up nicely under the sun. The sound was not their ally, but with songs like “Traveller In Time”, “Sunrise”, “Gypsy” and “July Morning”, it didn’t matter. At the end, they won the best response from the fans with the all-time classic, “Easy Livin’”. Good times!

I had the honor to see the legendary thrashers Exodus for second time in just a month. Their performance in Athens was fucking great and so that was too. I can’t really say the same about the audience. Here in Athens, the audience was so energetic, making so many pits and singing all the time, but in contrast with that, in Hellfest the crowd wasn’t fascinated, except for the crowd which was near the stage. Rob Dukes is one of the greatest frontmen because of his ability to transmit his passion to the audience. I’m not sure if he managed to accomplish that this time.

At the end, the “hot part” of this live was the addition of Mark from Death Angel who sang with Rob, and the “all time classic” wall of death in “Strike of the Beast” in which people went crazy. Nothing less, nothing more. I was disappointed about audience which maybe couldn’t realize who where on that stage.

Right after Exodus, I ran to the “Temple Stage” for something blacker. Shining, from Sweden, changed the mood in the Hellfest grounds. Atmospheric black metal, perfectly delivered, and the figure of the singer, Niklas Kvarforth, stealing everybody’s attention with his impressive voice.

Next stage that I attended to watch a band was “Altar Stage” for Aborted. First thing that I noticed when they came out was their sound. Really good one and full attendance by the crowd, with a set list of about 10-12 songs including “Global flatline”, “The Saw And The Carnage Done” and “The Holocause Incarnate”. We had a really good time with Aborted and they absolutely filled us up.

To lighten things up a bit, I decided to see what Within Temptation had to offer. I can’t say I’m a fan of symphonic or female fronted metal, but I was the minority at that time. Within Temptation, from their part, were good enough. The band was in a good mood and had nice sound. They also showed a few very cool videos on the video-walls. Only Sharon den Adel seemed to have a bit of a problem with her high notes, so she chose to remain in her comfort zone. And they were unlucky to pay right before Machine Head, as many started yelling for them instead.

After Aborted it was time for Unearth to play. Great show and full attendance in that stage. They had a crystal sound and songs like “This Glorious Nightmare” and “Thy Will Be Done” filled me up for the rest of the day. 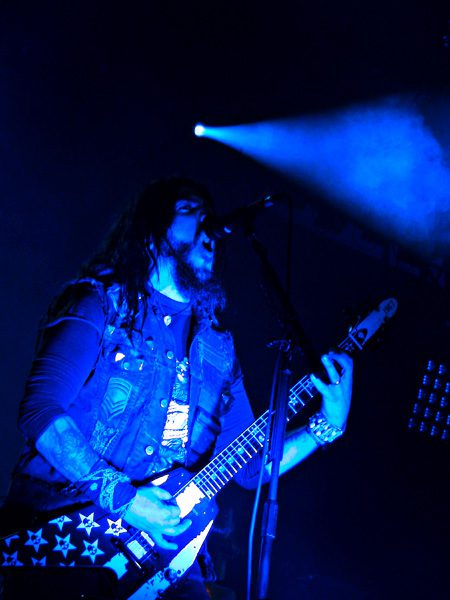 Finally the big moment came. The crowd shouted “Machine FUCKING Head” even if Within Temptation were performing on the stage. The words like “chaos” or “panic” are not enough to describe what we have seen. The people, who in previous bands weren’t as enthusiastic, changed to war beasts. Especially in tracks “Imperium” “Beautiful Mourning” and “Davidian” the crowd was so fucking awesome like I’ve never seen before. Even in the backstage, where you could see many artists from other bands, they couldn’t stop headbanging.

I can also remember Rob Dukes from “Exodus” who left backstage, grabbed a microphone and start singing “Davidian” with Robb (Flynn). I don’t know if this was pre-scheduled but Rob was so enthusiastic and so fucking crazy that it may have not been.

Right after Machine Head, I wasn’t really in the mood to rest, so I checked my options. Enslaved it was. I managed to see only the second half of their performance, but it was enough to understand that their appearance was top notch, accompanied by a great set. On the pluses was an unexpected but neat cover of Led Zeppelin’s “Immigrant Song” and of course “Allfadr Odinn”.

Entombed were hands down one of the unluckiest bands in Hellfest. Not because they played at the same time with another great band, but because after them played Behemoth. The Alter was halfway empty, because everybody had gathered at the Temple. Apart from that though, I can’t say that it was their best performance.

It’s 11:30, just a few minutes after Machine Head’s holocaust. Collecting my bones, I’m moving to “The Valley” stage where The Devil’s Blood were about to appear. Since I’m a big fan of vintage 70’s rock sounds and more specifically a fan of what we call “occult rock” – a genre which is becoming more famous day by day – I couldn’t miss the performance of the Dutch, who are, let me say, one of the leaders of this music style. It’s 11:55 and there are lots of fans waiting for the show.

Painted in blood, The Devil’s Blood hit the stage with “The Time of No Time”. Having an awesome sound from the very first minutes – and probably the best sound of the festival so far – a veil of mysticism unrolls above our heads and we’re lost in a labyrinth of psychedelic tunes which creates an unbelievable magical atmosphere. Next track in row is “Evenmore” and right after it’s “She” that blows my mind away! The sound is perfect still and the presence of the band on stage is superb!

Closer song is “Christ or Cocaine” and if you don’t know that song you definitely aren’t a Devil’s Blood fan and you can’t even imagine what happened when the crowd listened to the first tunes of that song! I can’t be less than satisfied with this performance. There is just one word to describe that show: EPIC!

After the great Machine Head show I headed up to “The Temple” stage, which was next to “The Altar” stage and I decided to sit in front of Behemoth’s stage and wait while Entombed was playing there. Unfortunately I didn’t pay attention at all because I was really tired and my mind was in Behemoth. And the time came to see them! I took my place up-front so I could watch the show properly. Suddenly they came on stage and oh my fucking God what was that? I started yelling and screaming, lights on and off, great show with burning crosses, Nergal changing masks, fire on stage! The sound was perfect and it was what I call a studio one. What a setlist!! They played many songs like “Ov Fire and The Void”, “Demigod”, “Conquer All” and a special song “23” which froze my mind! When the show ended I felt like a child that his candy was taken. What a show of that great band. Great way to finish the second day of the festival and a happy feeling stayed with me and along all the way back to the tent.

The second day left us all gathering our remains. Everything exceeded our expectations and most of the bands really blew our minds away. And now it was time for a much needed rest. For the brave and tireless the party would continue of course. If your ears could handle more metal in one day, there were some stages where local underground bands were playing, and there even were parties going on with djs and dancers. But we chose to prepare for the final day. The mud (due to the light rain that kept going all day) certainly made our way back to the tents more difficult, but who’s going to mind the mud? The second day was over and Machine Head and Behemoth especially had gotten us into a trance. It was only a matter of hours to see if the last day would have the same impact on us. And it would!