WITHIN TEMPTATION Collaborates With TARJA TURUNEN On New Single 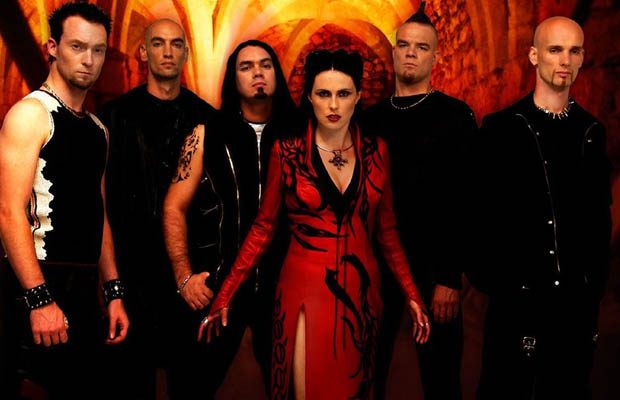 On September 27, Dutch symphonic rockers WITHIN TEMPTATION will release the “Paradise (What About Us?)” EP and promotional video, featuring a unique collaboration with classically trained Finnish rock diva, former NIGHTWISH singer Tarja Turunen, guesting on the title track.

Comments WITHIN TEMPTATION frontwoman Sharon Den Adel: “When we had written the first version of ‘Paradise‘ and listened back to the demo we’d recorded and the epic power of the song, we thought of Tarja instantly. How well this track would fit her classical voice and how extra special it would be if we sang it together. The more we thought about this wild idea, the more excited we got about it!”

Following several video trailers teasing the track, fans have been speculating on the band’s Facebook page who the duet would be with, some guessing it couldn’t possibly be a “competing” artist like Tarja. However, the two singers had no hesitation joining forces, having never thought of themselves as competitors. Sharon continues: “Of course I didn’t know what to expect from Tarja, as we’d never actually met in person ’till June this year. Our first encounter was via a Skype call we’d set-up to discuss the collaboration and we immediately clicked, not only creatively but personally. After we’d spoken, it felt completely natural that we would do this together!”

Tarja adds: “It was very nice to finally meet Sharon and the WITHIN TEMPTATION guys. I truly appreciate the invitation and the opportunity to work with them on their song ‘Paradise’. So wonderful that they thought of me! I hope our fans will like this ‘girl power’ duet!”

The song and accompanying music video share a central theme; that only constructive cooperation can lead to creation. To establish a new paradise, rising from the ashes of the old, we must work together.

For the first time, WITHIN TEMPTATION has also decided to give fans a very intimate insight into how they capture their song ideas early on. The EP will contain three additional tracks — demo versions of brand new songs intended for the forthcoming album. The demos include “Let Us Burn“, “Silver Moonlight” and “Dog Days“. Despite the demo versions missing intended symphonic, orchestral sounds and a finished mix, the powerful energy surging through the tracks can be heard right from the start.

The duet between Sharon and Tarja is just one facet of the new material. WITHIN TEMPTATION guitarist Robert Westerholt reveals: “For the first time, WITHIN TEMPTATION will release an album with several artistic collaborations, some of which will be seen as groundbreaking for our band and musical style.”

Consequently, the recording and production of the sixth studio album is still underway. With a release date set for end of January 2014, it is therefore necessary to reschedule the previously announced first leg of the band’s worldwide tour to allow time to rehearse the live show and prepare for the album’s release.

The band’s world tour will now begin on February 26, 2014 in Helsinki, with some newly added Eastern European dates, announced today, which will go on sale on Friday, September 20. The rescheduled shows will kick off on April 6 in Munich and run through to May 2 in Amsterdam. The band intends to add further overseas dates during the remainder of 2014.

Robert says: “We understand that the rescheduled tour dates are a blow for the many fans who have bought tickets early and we sincerely apologize for any inconvenience caused. We hope they feel a little compensated by the release of our new, special priced four-song EP, which gives them full insight into the kind of album we are working on. To make up for the rescheduled dates, we’re now pressured to work even harder to deliver our best and most impressive live production ever on the upcoming tour. However, the completion of a great new album is a prerequisite for that! And therefore the only option was to reschedule the dates for Western Europe.”

Tickets that have been purchased already will remain valid for the rescheduled dates.

“Paradise (What About Us?)” track listing: