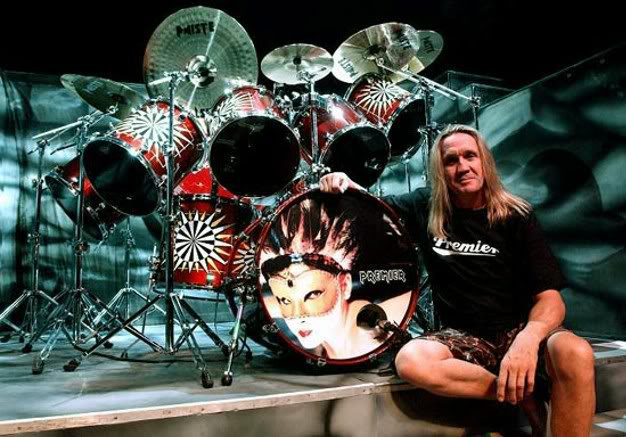 IRON MAIDEN drummer Nicko McBrain spoke to The Press-Enterprise ahead of the band’s September 13 concert in San Bernardino, California. A couple of excerpts from the chat follow below.

On playing in California again:

McBrain: “We love San Bernardino. Mainly, [we] just [remember playing] fantastic gigs [there in front of] fantastic crowds. I think 2005 was a little bit rough for us, but that was something that’s been very well documented and we shan’t talk about now.” [Referring to the band’s final gig on the 2005 Ozzfest in which they ended up with power cut off during the set and eggs thrown at them.]

“It’s always nice playing in California. We always used to stay uptown around the Sunset Strip area … we’ve calmed down from the party days. It’s a nicer pace of life in Santa Monica. It’s lovely being next to the ocean and the pier.”

On the “Maiden England” tour, which went worldwide in 2012 and brought back some of the band’s classics that haven’t been performed live in a while:

McBrain: “We dusted the cobwebs off of ‘Phantom Of The Opera‘; we hadn’t played that in about five or six years. The one that really gets me is ‘Seventh Son Of A Seventh Son‘. It’s a very tricky song to play. It’s got a lot of different moves and moods in it. That one I find really hard but challenging, and it’s really great to play because it’s a stunning piece of music.”

McBrain: “They’ve got a great show. They’ve got these wonderful Jumbotron tellies and screens and they’re sounding really, really good.”

On the possibility of IRON MAIDEN staging its own festival:

McBrain: “You never know, you just never know in this game. I think it would be great to do a Maiden Fest.”

Read the entire interview at The Press-Enterprise.