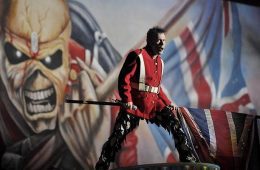 Manos SpanosOctober 13, 2013
IRON MAIDEN frontman Bruce Dickinson recently spoke to Argentina's Vorterix about the band's plans to record a new studio album, the touring life, his singing technique and his many outside projects, among other topics. A few excerpts from the chat follow below. (Thanks to MaidenRevelations.com for helping transcribe some parts of the interview.) On when IRON MAIDEN plans to release a new studio album: Dickinson: "Well, I mean, we are going to do another album. When we do it, I can't tell you." On whether any new material has already been written for the next IRON MAIDEN CD: Dickinson: "Actually I've written a load of stuff. You know, we're all writing little bits and bobs all the time. We'll see what happens, you know. But yeah, sure." On whether IRON MAIDEN plans to revisit its '90s material on its future tours: Dickinson: "We haven't got that far yet. Let's finish this one ['Maiden England'] first and see what happens next year. But yeah, I do not think MAIDEN fans are going to be too disappointed for too long." On how IRON MAIDEN has managed to avoid the excesses that came along with being a huge '80s rock band: Dickinson: "It's just kind of what we're like, really. I mean, I'm not saying that nobody in the band has ever tried or mucked around with smoking dope when they we're younger. Most kids have probably tried smoking dope. Most kids have probably tried a few other things that I've never tried.
010 min read

Manos SpanosOctober 4, 2013
IRON MAIDEN's "Maiden England" 2013 world tour came to a spectacular end two nights ago in Santiago, Chile, with a return to the Estadio Nacional, playing to 60,105 fans, "the largest audience by a British band ever" (La Tercera newspaper). This is quite ironic consideringMAIDEN was banned by the church from playing in Chile in 1992, yet has played there four times in the past six years alone, and, of course, recorded the live DVD "En Vivo!" at the Estadio Nacional in 2011. IRON MAIDEN tour production manager Patrick Ledwith has checked in with these details from his 2013 tour logbook: "Since rehearsals started 131 days ago with 1 band and 102 crew, there have been 46 shows, 1,175,714 MAIDEN fans, 45,350 miles travelled, 44 cities in 25 different countries on 3 continents, 3,853 hotel rooms, 71,579 lbs of air freight, 2,576 stage hands, 350 lighting fixtures, 330 sets of guitar strings, 2,000 picks, 184 drums sticks, 600 rolls of gaffer, 400 rolls of over tape, 598 tanks of CO2 gas, 278 tanks of propane, 3,380 dinners, 96 cheese wheels, 5,646 bottles of Trooper beer, hundreds of miles walked by Hackers... and we have made it to the end of another tour." Footage of IRON MAIDEN performing the song "Run To The Hills" in front of 90,000 Brazilian fans at the Rock In Rio festival can be seen below. During a brand new interview with Chile's Radio Futuro, IRON MAIDEN guitarist Dave Murraywas asked if there are any plans for the band to return to the studio to begin work on material for the follow-up to 2010's "The Final Frontier". "We've been out on tour quite a few months this year," Dave explained. "So when we finish, we're actually going to go and head back and take a break, really." He continued: "We haven't got any plans, as such, really, what's gonna happen next year. Basically, we're just gonna wait and see. [laughs] But there's things that are going on in the meantime. I mean, we just had a beer come out — it's like the Trooper beer — and that's actually doing really well. So we'll just let the Trooper beer go on tour for us. [laughs] And then we're just gonna spend some time off recuperating. So I'm not quite sure what's gonna be happening next year. It's all up in the air." IRON MAIDEN last month landed at position No. 1 on Billboard.com's "Hot Tours" list of top-grossing tours with $8.5 million in ticket sales from six performances on their summer tour of Europe. The shows were attended by a total of 121,280 fans, including a two-night, sold-out stand on August 3-4 at the O2 Arena in Lonon, England, where the band played to 27,000 fans. With totals added from this summer's Europe dates, overall ticket sales from the tour top $42 million from 45 reported concerts.
02 min read 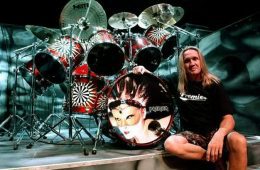 Manos SpanosSeptember 16, 2013
IRON MAIDEN drummer Nicko McBrain spoke to The Press-Enterprise ahead of the band's September 13 concert in San Bernardino, California. A couple of excerpts from the chat follow below. On playing in California again: McBrain: "We love San Bernardino. Mainly, [we] just [remember playing] fantastic gigs [there in front of] fantastic crowds. I think 2005 was a little bit rough for us, but that was something that's been very well documented and we shan't talk about now." [Referring to the band's final gig on the 2005 Ozzfest in which they ended up with power cut off during the set and eggs thrown at them.] "It's always nice playing in California. We always used to stay uptown around the Sunset Strip area … we've calmed down from the party days. It's a nicer pace of life in Santa Monica. It's lovely being next to the ocean and the pier."
02 min read

Manos SpanosJuly 27, 2013
British heavy metal legends IRON MAIDEN this week landed at position No. 1 on Billboard.com 's "Hot Tours" list of top-grossing tours with $19 million in ticket sales from 14 performances in 13 cities on their summer tour of Europe. The shows were attended by a total of 259,298 fans, including a sellout crowd of 55,531 at a football stadium, Friends Arena, in the Stockholm suburb of Solna, Sweden. Also included was a sold-out concert on May 29 at Lisbon, Portugal's Pavilhão Atlântico. IRON MAIDEN's August 3 show at London, England's O2 Arena (with a capacity of up to 20,000, depending on the event) sold out in just 12 minutes, so a second show was added on Sunday, August 4. This will definitely be the band's last U.K. show this year as soon after they head off for a few selected USA shows before a massive trip around Latin America, including headlining Rock In Rio and national stadiums in Mexico, Chile and Argentina.
02 min read

Manos SpanosJuly 5, 2013
The first in a series of new tour-diary videos from British heavy metal legends IRON MAIDEN can be seen below. IRON MAIDEN singer Bruce Dickinson recently told the Swedish web siteTalarforum (Speakers' Forum) that there are plans for the band to enter the studio to record a new album for a tentative 2014 release. MAIDEN's 15th studio CD, 2010's "The Final Frontier", featured 10 tracks that had an average running time of seven minutes and 40 seconds, with the shortest song, "The Alchemist", clocking in at four minutes and 29 seconds, and the longest, "When The Wild Wind Blows", lasting ten minutes and 59 seconds.
01 min read

Manos SpanosJuly 4, 2013
According to The Drinks Business, Robinsons Brewery has announced the production of the one millionth pint of IRON MAIDEN's Trooper beer. The brewery said the mark had been reached six months ahead of schedule — just eight weeks after Trooper was launched. This equates to over 20,000 pints of the beer being drunk every day since its launch on May 9. Robinsons' managing director Oliver Robinson said: "We are amazed to reach this mark in such a short time, a million pints already is way ahead of all rational expectations, and are grateful for the support we have had from the retailers, MAIDEN fans, real ale enthusiasts, our distributors and the beer trade generally as they were so quick to catch on to the genuine and unique quality of this beer.
01 min read

Manos SpanosJune 28, 2013
IRON MAIDEN's August 3 show at London, England's O2 Arena sold out in just 12 minutes, so a second show has been added on Sunday, August 4. This will definitely be the band's last U.K. show this year as soon after they head off for a few selected USA shows before a massive trip around Latin America, including headlining Rock In Rio and national stadiums in Mexico, Chile and Argentina. Tickets for this second show are available to buy now from TheO2.co.uk,AXS.com and LiveNation.co.uk and, like the first show, all ticketing will be paperless to protect MAIDEN fans as much as possible from touting and inflated pricing on the secondary ticketing market. Comments MAIDEN singer Bruce Dickinson: "We've all been having such a fantastic time on this tour. From the very first show in North America last year to the European dates we are doing now, it's just been tremendous fun. Our fans have been brilliant as usual, and seem to be loving the setlist and the stage production! So we thought that because this tour has been such an amazing experience for band and fans alike, it somehow seems right to finish up back home in England and have the final show celebration on home turf. And now instead of one night's celebration back home, we get to have two!!"
03 min read

Manos SpanosMay 27, 2013
The sale of IRON MAIDEN's Trooper beer was recently halted in Sweden by the country's state-run liquor store monopoly Systembolaget due to legal concerns over the skull and crossbones motif on the label. Independent U.K. brewer Robinsons, which created a real ale in partnership with heavy metal band IRON MAIDEN, has now released the following statement regarding the matter: "Due to local Swedish government alcohol and marketing act which do not allow elements of war, weapons or aggression to be featured on alcoholic product, we were unable to sell Trooper beer to our fans in Sweden unless we modified the label artwork. "As our first and foremost priority is for our Swedish fans to be able to enjoy Trooper beer, we amended the label by simply focussing purely on [IRON MAIDEN mascot] Eddie's face and are now very pleased to advise that the new label, currently exclusive to Sweden, has now been approved.
03 min read 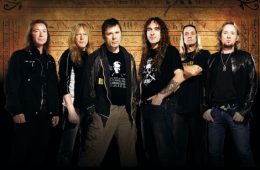 Manos SpanosMay 11, 2013
IRON MAIDEN's Trooper beer was officially launched yesterday (Thursday, May 9) at Robinsons Brewery in Cheshire, with a reception attended by brewing trade representatives from both the U.K. and internationally. As fans may have read recently, the unprecedented upfront demand for the beer meant Robinsons had to brew three times a day, six days a week for the first time ever in the brewery's 175-year history to cope with pre-orders in excess of 300,000 pints. Robinsons were overwhelmed by the number of enquiries they'd had from all over the world and sent the band a comprehensive listing of whereabouts the interest had been — from a staggering 184 countries! So, a big thanks to all MAIDEN fans and it's great to know the MAIDEN family extends into so many places where the band have never even had a chance to play before!
02 min read

Manos SpanosMay 8, 2013
British heavy metal legends IRON MAIDEN recently teamed up with Cheshire family brewers Robinsons to create a new beer, Trooper. To celebrate the release of Trooper, select Robinsons pubs will haveTrooper on draught from the evening of May 9. Locations can be found atthis location. According to The Sun, Robinsons is having to work a six-day week to keep up with demand.
03 min read